Share All sharing options for: 4th and Geaux: Saints vs. Bucs Edition

After a slugfest in Atlanta that left both teams’ offenses crying into their pillows, the  Saints wrap up the season against a wounded Buccaneerss team that is playing for a miracle playoff berth. A sign of how weird the Saints’ season has been: last week, they weren’t even assured of making the playoffs, and this week, they’re one (improbable) step away from the top seed in the NFL.

While the Saints would benefit greatly from not having to travel to Chicago or Philadelphia or New York or wherever come playoff time, how likely is it that they’ll actually earn the #1 overall seed? Today, we’ll tackle that question, plus preview the game, and look at why Mike Smith is no Sean Payton. Buckle your seat belts, find the bathroom with the cushioned toilet seat, and settle in.

It’s time for 4th and Geaux.

Note: This is the last holiday-and-work-abbreviated 4th and Geaux: I’ll be back in full inanity by playoff time.

Man, are the Saints and Falcons pretty evenly matched or what? Through nearly 9 quarters of football (2 games, one of which went deep into overtime), the teams are tied for the season. The Falcons won the first matchup by a field goal, and the Saints returned the favor last week. It’s no wonder that the NFC South race is tight headed into the final week of the season.

While last week’s game has been broken down to death at this point, I’d like to take a second to rehash a pivotal play in the game, one that highlights why I’m glad Sean Payton is our coach. I’m talking about Falcons coach Mike Smith’s decision to punt the ball on 4th and 6 late in the game.

For those who don’t remember, the Saints had taken a 17-14 lead, and the Falcons were driving to either tie the game with a field goal or take the lead with a touchdown. The Falcons started the drive on their own 19 with 3:19 left in the game. Let’s look at the drive in detail:

On the next play, Ryan threw a short pass to RB Jason Snelling, who was run out of bounds after a 4-yard gain. At this point, it was 2nd and 6 for the Falcons, with 3:04 left in the game.

On 2nd down, the Falcons tried another short pass to Jason Snelling, but this one was incomplete. It was now 3rd and 6 with about 3:00 remaining.

At this point, the Falcons should have been more worried about getting a first down than scoring. Time was a factor, but not so much that they needed to force the ball down the field. They had plenty of time to score, but only 2 plays to get 6 yards. At this point, downs were more valuable than seconds. Since the Falcons averaged about 4.1 yards per play during the game, they should have been able to run two plays and wind up with a first down.

Instead, they threw it deep on 3rd down, over the middle to Harry Douglas. Incomplete, 4th and 6 to go.

While not playing for the first down was probably a bad decision, I’ll let it slide, figuring that the Falcons thought they could catch the Saints off guard. It didn’t work, but that’s football.

Punting the ball, on the other hand, was not really defensible. It took a situation in which the Falcons were unlikely to win and turned it into a situation in which the Falcons were extremely unlikely to win. Advanced NFL Stats has a detailed breakdown if you’re mathematically inclined, but if you aren’t, think of it this way: if the Falcons had made the conversion, they would have needed 15 yards or so to have a difficult-but-makeable field goal to tie the game.

Alternately, if they missed the conversion, they would have had a chance to stop the Saints, get the ball back, and drive for a tying field goal or winning touchdown. By punting, the Falcons eliminated the chance of getting the first down and relied on their tiring defense to stop the Saints and get the Falcons’ offense the ball back with less than a minute to go to drive for a tie or a win.

The total chances of winning were higher by going for it than by punting, but going for it was an aggressive move that would have been easily second-guessed, which is exactly the sort of thing that risk averse NFL coaches tend to avoid. The spotlight beckoned, but Smith and the Falcons shrank away from it, disappearing into the Dark Corner of Defeat.

There are exactly two coaches in the league whom I can guarantee you had the right combination of cojones and juice to go for it in that situation: Bill Belichick and Sean Payton. While Payton’s decisions don’t always win him fans, he usually makes the higher-percentage (often more aggressive) call. I’m thrilled that he’s our coach and that he has the guts to make the right call, even if he has to answer for it on Monday.

Since Dave Cariello just got his playoff tickets in the mail, I thought it might be interesting to figure out how likely it is that he’ll have a chance to use them. If the Saints don’t get the #1 seed, they very well might not have a home playoff game, and that would make Dave (and the rest of Who Dat Nation) sad. If the Saints do have the #1 seed, then any playoff games they play would be in the Super Dome (well, except for the Super Bowl), and Dave would be happy. Let’s look at the odds of this happening.

First, a refresher on the Saints’ playoff chances, in case you’ve forgotten.

There are only two seeds in play for the Saints: the fifth seed and the first seed. If the season ended today, the Saints would have the fifth seed, and travel to the NFC West champion for the first round of the playoffs.

Similarly, the Saints will probably beat the Bucs, but they won’t definitely beat them.

Fortunately, Advanced NFL Stats publishes win probabilities each week in the New York Times. While these probabilities are imperfect approximations, they give us a useful reference point.

*I recognize that you could make a convincing argument that these events aren't independent. Doing so, however, would greatly complicate the calculation beyond the scope of this column. Plus, it probably wouldn't change the math that much.

So, per Advanced NFL Stats, the Saints have slightly less than a 1 in 8 chance of getting the #1 seed.

You can play with the numbers yourself, of course, but these strike me as roughly right.

Football Outsiders is more pessimistic: their playoff odds calculation gives the Saints about a 6.6% chance of earning the #1 seed, which is closer to 1 out of 15.

Regardless of what you plug in or whose stats you believe, the odds aren’t that good. However, I’m telling you there’s a chance!

So, if I’m Sean Payton, I’d check the scoreboard at halftime, and if the Panthers are down by a couple of touchdowns, I’d sit Drew Brees et al. and save them for the playoffs. We don’t need any more injuries chasing a miracle.

Sizing up the Opponent

The Bucs are an exciting young team that looked like they were going to ride an easy schedule to a playoff appearance, at least until the injuries started piling up. And, boy have the injuries piled up: the Bucs have lost starting CB Aqib Talib, C Jeff Faine, DT Gerald McCoy, LB Quincy Black, and a whole host of other folks for the season. This is a team in tatters, and the Saints should be the beneficiaries. The Bucs have had a terrible run defense this year, which will be even worse thanks to the injuries. Their pass defense isn’t much better, and will be even worse thanks to the injuries. They are last in the league in Football Outsiders’ adjusted sack rate, taking down the QB less than 4% of the time.

In other words, the Bucs are vulnerable on defense, and if the Saints’ offense is clicking (and the starters are playing), they should be able to put some points on the board, even without Marques Colston, Courtney Roby, and whichever other Saints Payton decides to hold out.

The Bucs’ offense is a little more scary, and seems to be getting scarier by the week. Offensively, the Bucs appear to be roughly as good as the Saints: Football Outsiders has the Bucs’ offense rated slightly higher than the Saints’,Advanced NFL Stats has the Bucs ranked slightly lower, as does Pro Football Reference. The Bucs have a bunch of budding stars: QB Josh Freeman, WR Mike Williams, and RB LeGarrette Blount. This is a team to be reckoned with, and so the onus (as usual) is on the Saints’ offense to get points on the board to allow the defense to head to play in a complementary style. Blount could kill the Saints in this game if the Bucs get a lead.

Beer of the Week: because sober analysis requires good beer

Since I reviewed a Tampa-area beer earlier this year (in my first-ever column for CSC!), I’ll take the liberty of going off the reservation this week. There’s a beer that I’ve been waiting to try for several years now, and I’m bringing back the Beer of the Week so I can review it.

I’d been wanting to try Ten Fidy for quite some time, but I had to convince my wife (who is certainly smarter than I) to let my buy the beer, which costs about $15 for a 4-pack. We had a coupon this week, so she finally relented. 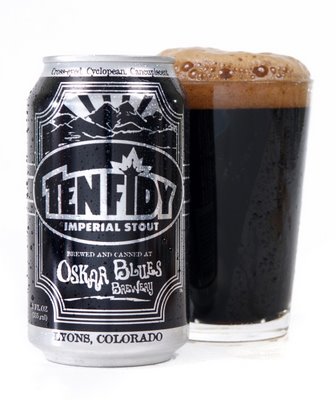 The beer didn’t disappoint. Ten Fidy pours dark, thick, and motor oil-like, with a thick, brown head. This is the thickest, darkest beer you can imagine, and gives off a heavy nose of cocoa, malts, and coffee, with a little dark sugar and smokiness. The aroma is pretty strong, but not overwhelming, which is surprising for such a "big" beer. The taste follows the nose: chocolate, coffee, and roasted malts, just what you’d expect from a Russian Imperial Stout. The alcohol is in the background (somewhat surprising for a 10.5% ABV brew), but comes through in the end.

Overall, this is a very good beer, though not significantly better than some other great stouts available. It’s perhaps a bit overpriced. Overall, I’m going to rate this beer a Ricky Williams: a solid, potential Pro Bowler, but something you have to give up too much for. Definitely good, but definitely not worth the price.

You can listen to Stuart each week on The Who Dat Report and the NFC South Report, or follow him on Twitter.