Time for the eighth overall selection in our second annual CSC community mock draft. This means the Oakland Raiders are now on the clock and representing the silver and black is the one, the only stujo4. Ask and you shall receive.

Stu did an excellent job of "mocking" the Raiders, so there's no telling who he's gonna pick. Make the jump to find out where he went with it.

Thank you so much for your participation, stujo4.

With the eight pick in the CSC community mock draft, the Oakland Raiders select... 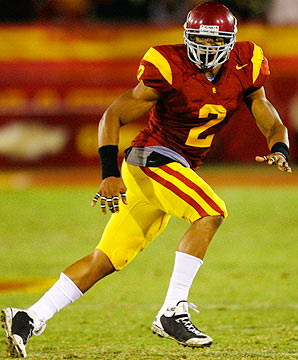 The Oakland Raiders traditionally are the laughingstock of the NFL draft. There is no indication that Al Davis has given up control of the process and with a senile old man still making the calls, how much worse could I do. Right? First, let's review the last decade of Raider first-round picks and assess the damage.

In this year's offseason, the Raiders continued with the weirdness. The restricted free agent tender decisions didn't make sense (e.g. putting a first and third round tender on their crappy nickel back, Stanford Routt). They tried to trade CB Nnamdi Asomugha, perhaps the best corner in the league (and by far the highest paid; who wants to pick up that contract?). This past weekend, they cut RB Justin Fargas right after naming him their "Commitment to Excellence" award winner. The dinner where they'll present the award to him is on March 13th. Awkward.

Sure, you can examine the Raiders' weaknesses and make a draft pick that would improve the team, but that would be logical and probably far from reality. Al Davis is dazzled by hot measurables (Heyward-Bey ran a 4.3 40-yard dash at the combine and had been clocked as low as 4.23). So who made a big splash at this year's combine? Wide receiver Jacoby Ford ran a 4.28 40-yard dash and was the only one who was clocked below 1.5 seconds at the 10-yard mark. He's a burner, but he's only 5'9". Taking fast WR's in the first round two years in a row? That's too crazy even for Al Davis.

OT Bruce Campbell had an awesome combine with the best 40-yard dash time and the longest arms of the offensive linemen; and he benched 225lbs. 34 times. That had to catch Al's attention. And he was the favorite bone-headed pick at #8 for the Raiders (BleacherReport.com, WalterFootball.com, InsidePulsesports.com, NewNFLdraft.com, and FootballsFuture.com all picked Campbell for the Raiders in their mock drafts).

But something happened on the way to heaven. In our CSC community mock draft, the Kansas City Chiefs took Campbell at fifth overall, making a mockery of my mockery of the Raiders in this mock draft. So what is Mock Al Davis' second choice? The fastest defensive back at the combine - Taylor Mays, USC. 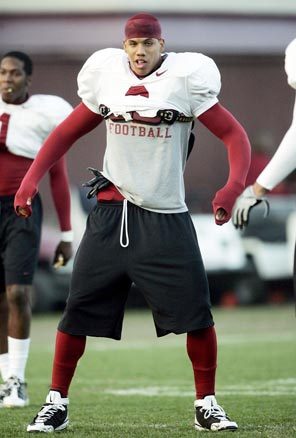 Mays, a 6'3" 230lbs. safety, ran a 4.24 unofficial 40-yard dash at the combine (a controversial 4.43 official time; probably was closer to 4.30) and did well in the bench press, vertical jump and the broad jump. And the kid can hit, no doubt about it. Don't let him see your taillights, he pulls a heavy load. He says he looks up to Ronnie Lott and Troy Polamalu. Does he fill any need on the Raiders? No. What's with trying to use logic? We covered that already. Maybe he'll replace Michael Huff (see above list, 2006).

Let's check in with NFL.com and their Combine write-up and see how Taylor Mays matches up as a Raider (I've added my own notes as well):

Mays has an outstanding combination of size, strength and athleticism for the safety position. He possesses excellent speed (RAIDER!), quickness and burst for his size, which makes him a versatile player who could fit in several different schemes. He has good instincts to attack the alley as a run defender and can make plays in the passing game as a deep safety. He tends to be too aggressive (RAIDER!) with the ball in the air, trying to make the big hit (RAIDER!) instead of making a play on the ball. He can be inconsistent with his angles and technique (RAIDER!) but relies on his great athleticism (speed? RAIDER!) to recover and make the play. Mays will be highly coveted in this year's draft if concerns about his overall mental makeup (RAIDER!) are answered.

Ok, I'm feeling good about this. As a final confirmation, who did one of our cousins over at SB Nation's Raiders blog, Silver & Black Pride pick in his own fanpost mock draft last week? First round, Taylor Mays, S, USC. Second round, Tim Tebow, QB, Florida.