Next up are the Miami Dolphins with the twelfth pick in our second annual community mock draft. Like last year, the Fins will be represented by CSC member, jful. To find out who he thought was the best fit for Miami, keep reading.

My sincere thanks to jful for this participation.

With the twelfth overall pick in the CSC community mock draft, the Miami Dolphins select... 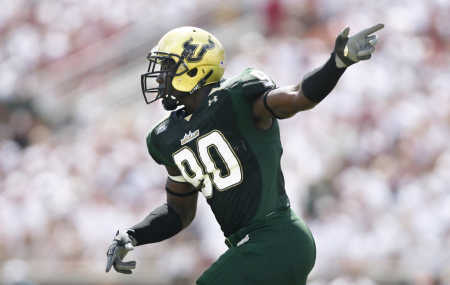 The Miami Dolphins unquestionably have a shot at an AFC East title in 2010; it's no longer safe to assume the Patriots own the division. However, in order to remain competitive with the Pats, the surprisingly strong Jets, and the rebounding Bills (haha, just kidding. Sorry Bills fans), the Dolphins have to address their defensive needs in the first round. This may come as a disappointment to some Miami fans - many of my friends around here are concerned about their running backs (Ronnie Brown's recovery and Ricky Williams' age), finding a true number one wide receiver (Dez Bryant would be attractive, if he were still available), and their depth along the defensive line (Jason Ferguson's certainly not getting any younger). However, developing a formidable pass rush should be the first priority for the Dolphins' front office, and I think that's true for a few reasons.

First, as other teams with many needs to fill have found out, one big-play offensive superstar will not turn a franchise around. Additionally, the Dolphins offense is solid enough. They have a solid ground game, and they seem to have the most successful integration of the "Wildcat" of any team in the league. Chad Henne is still developing as a quarterback, but he appears to have the physical tools to be successful in the NFL; and while the receiving corps in Miami doesn't post eye-popping stats, they have a diverse set of skills among their young, developing receivers.

Second, the primary contributors to the Dolphins' pass rush are gone: Joey Porter was released; his nine sacks led the team. Jason Taylor is a still-unsigned free agent (his seven sacks were second-most), and I'm pretty sure he's turning like 45 this year and/or becoming a professional ballroom dancer. The Karlos Dansby pick-up was big for solidifying the interior of the linebacker corps, but there is still a glaring need for an outside pass rusher. In the modern NFL, premier pass rushers are behind only franchise quarterbacks and left tackles in terms of importance, so the Dolphins have to fill this hole in their defense with the twelfth overall pick. Jason Pierre-Paul may be the perfect solution.

He's 6'5", 270lbs., and he ran a 4.64 40-yard dash. That's pretty ridiculous. Jason Pierre-Paul has been talked about as a bit of a gamble because of apparent academic troubles, lack of experience, and other "intangibles" -whatever those are (Tebow's got boatloads!) - but there's no doubt he has some pretty freakish athletic ability.

Right? Pretty athletic guy, to say the least. I can't see Parcells & co. opting for a wide receiver when finding a replacement outside linebacker is so critical, especially since the high-profile, loud-mouthed Porter often failed to live up to his own billing.

Jason Pierre-Paul has a skill that would fill in nicely: he's fast, athletic, and very strong, with ridiculously long arms and the ability to put a lot of pressure on the quarterback. He could provide an immediate boost to the turnover department (something we Saints fans can attest to the importance of), which last season was pretty bad; an eight turnover differential is never a good thing.

Some mock drafts have him going as high as third overall (I can't imagine that), but he's popularly considered a top-10 pick. I mention that because I think, other than Suh and McCoy, there isn't a defensive tackle worth taking at twelfth overall, nor is there another pass rusher who is clearly a superior prospect (although I personally like Jerry Hughes better, but I'm no expert so who cares). As a result, Jason Pierre-Paul doesn't have to worry about moving; he'll start his NFL career in South Florida.