We are now halfway through our second annual community mock draft here at Canal Street Chronicles and things are going quite smoothly. The Tennessee Titans are the team stuck right smack in the middle of this years NFL draft and representing them here on CSC is silo10. Keep reading to see which player he selected and why he selected him.

Thanks goes out to silo10 for his participation.

With the sixteenth pick in the 2010 CSC community mock draft, the Tennessee Titans select...

Surprised? In a way I was as well. Let me be the first to say, I really don't see this happening at all. The Titans drafted a wide receiver in the first round of last years draft and the chances of them doing it again are slim to none. But this is me drafting, not the Titans.

This all started when both Jason Pierre-Paul and Derrick Morgan dropped off the board. At first I was very excited at the prospect of landing JPP (Pierre-Paul). While he may be raw and unproven, his athletic talent is off the charts. He reminds me of another Tennessee Titans defensive end, Javon Kearse (pre Eagles suckage of course). With Jim Washburn (Titans DL coach) being one of the best in the business, I could only dream of what he could do with this athletic marvel. Unfortunately, just like this draft I just don't see it happening. Morgan would have been a nice runner-up as well; his ability to rush the passer and play the run would fill that exact same hole that Kyle Vanden Bosch just left wide open.

Of course, I could have just settled for one of the other defensive line prospects. Anyone from a Graham to a Brian Price could be plausible. In my opinion though, Price is a perfect 3-tech Tampa 2 guy, but not the run stuffer the Titans need. And Graham is not really big enough to fit in with the Titan's line control mentality its defense needs in its line. The titans defense works around the idea of a defensive line capable of both stuffing the run and bringing the pressure so that the linebackers are free to roam as they please. 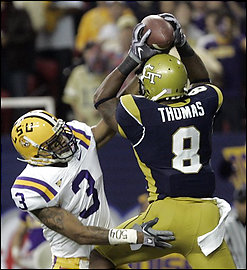 As it stands I feel that the Titans have a line that can work in the mean time. Possibly targeting another DL in the later rounds may address this need. After JPP and Morgan, I feel that the prospects just drop off too far.

Thomas is a standout wide receiver from Georgia Tech. While he may have operated out of the triple option, his 20+ yards per catch average is still insane. At 6'3" 225lbs. he has the body of a Calvin Johnson (aka Megatron). According to Mike Mayock (this by way of rotoworld.com) Thomas has a lot in common with Crabtree from last year (let us hope it is minus one prolonged holdout). I have to agree. If this guys foot had not been broken, he would have easily been challenging Dez Bryant for the top WR honors in this years draft. His route running may be a bit raw, but he does have production and can really stretch a field.

His ability to stretch the field, and bring big play potential to the Titans is why I value him so much. This is a make or break year for Vince Young, the inconsistent but unarguably talented QB of the Titans. The Titans already have a good young receiver, but pairing him with a real deep threat could make this a really potent offense with arguably the best running back in all of football in the backfield. A mobile quarterback with a big arm, and two very young and talent wide receivers whose skills complement each other; this could be a real offensive force. If after supplying Vince with this much talent he still cant get it together, we will know his time has come to leave. If that has to be so, then whoever the heir apparent is will walk into a truly loaded offense. Either way, this pick would send the Titans to the next level and allow them to really challenge Indy's offensive superiority in the division.