Next up in our second annual community mock draft here at Canal Street Chronicles is the New England Patriots with the twenty-second overall selection. Making the pick for the Patriots and gracing us with his presence once again is the ever popular Ralph Malbrough. Enjoy another great write-up and find out who he chose after the jump.

Thanks to Ralph for participating and coming through in the clutch.

With the twenty-second pick in the 2010 CSC community mock draft, the New England Patriots select...

I’m back. Dave asked me to pinch hit for the Patriots pick. Dave, you owe me for this. I could have done actual work instead of writing this.

Oh, the Patriots; how America hates them. Remember back in 2002 when they were all warm and cuddly? Tom Brady wasn’t some supermodel-banging, stuck-up pretty boy but a fresh faced kid from Michigan. The Patriots got introduced as a team during pre-game at the Super Bowl in New Orleans. Then they went on to beat the St. Louis Rams and Mike Martz.

Then the Red Sox won two World Series, the Patriots won two more Super Bowls, the Celtics won a title and Bill Simmons started churning out 5,000 word columns telling the world how Boston sports fans were smarter, more passionate, appreciative and deserved more great sports teams more than any other city in America. Oh, and the fan base in general became as tolerable as a Jay Leno monologue. And we learned Bill Belichick is a huge gigantic #$%^ and likes to film grown men without them knowing it.

The Patriots' run was officially ended when Baltimore ran their butts over in the playoffs this year. New England fans couldn’t boo then head for the exits fast enough during the third quarter of that beat down. New England is on the decline. Randy Moss is officially old and as a fantasy tip to you, avoid him like the plague this year. Trust me.

Wes Welker pulled a Mike McKenzie and tore up his knee hideously at the end of the season so the next season he won’t be close to 100%. Their secondary is young, confused and still trying to figure out how Devery Henderson got so wide open.

Belichick had his genius crown taken by Sean Payton but he’ll try to regain it by drafting Sergio Kindle. 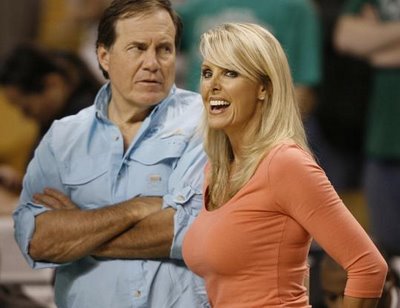 Seriously, Kindle will be very good and I’d love for the Saints to get him. He’ll be a good third down rusher right away. I know this because I’ve seen highlights of him on ESPN and this makes me an expert.

Just so you know I hate New England so much it clearly was the regular season highpoint in 2009 when the Saints crushed them.

Ralph Malbrough is a columnist at WWLTV.com You can reach him at ralphmalbrough@hotmail.com