We're now onto the twenty-third pick in our second annual CSC community mock draft. Today's pick for the Green Bay Packers was made by FriarBob. I will let him take over and reveal the player he has selected. Thanks to him for his participation.

Today's pick for the Green Bay Packers (number twenty three in our second annual CSC community mock draft) is brought to us by our resident Fighting Friar. Friar Bob may only be the assistant to the big cheese of Sherwood Forest, but don't let that fool you. Without his blessing not a single mission is undertaken, and there are far too many greedy extortionist churchmen and downtrodden poor in Medieval England even for the Merry Band to fully handle, so he keeps rather busy. But he was able to squeeze in just a bit of time to share some of his unearthly wisdom about a game that won't be invented for centuries with you today (Note: Friar Bob may have threatened to sic Little John and Will Scarlet on Saintsational if he didn't get an appropriate introduction).

With the twenty-third pick in the 2010 CSC community mock draft, the Green Bay Packers select...

Last year, week one wasn't a whole lot of fun for Aaron Rodgers:

Week two was even worse:

Thankfully, they played a weak St. Louis team in week three and he was only sacked two more times. But then week four came along:

In the span of four weeks, Aaron Rodgers was sacked as many times as Drew Brees was all season long. Ouch. Along the way he had a couple of fumbles, an interception and two safeties. Were it not for Jay Cutler being overly generous with the ball and St. Louis being just flat pathetic, at this point they would have been 0-4 and their season would have been (unofficially, at least) over before it started. Even worse, he'd be sacked another 30 times over the course of the rest of the season, including another 21 times in four out of the next five games. His only respite was playing a Browns team that was apparently so horrid at this point they couldn't even sack him once. Granted, Rodgers is still young and in good health (for now at least), but 50 sacks and likely a couple hundred or so hits is a bit too much to ask him to take. 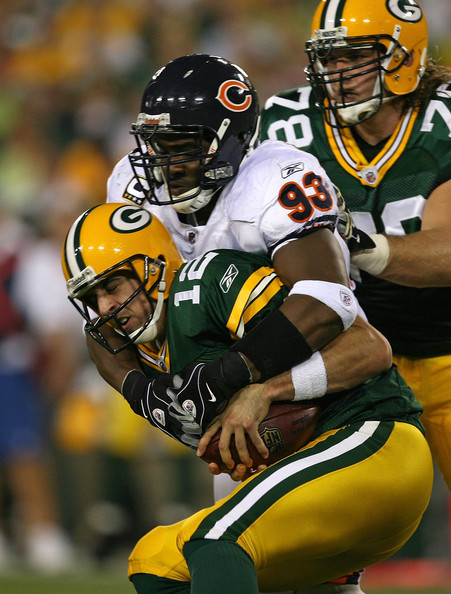 Can I just take a nap now?

While it's true that some of that was his own fault for holding onto the ball too long, some of it was not. In week one Adewale Ogunleye essentially treated Allen Barbre like a revolving door, pushing through in two seconds or less, often without the slightest resistance. Then in week two Chad Clifton went down to injury (not like he was playing all that great before, but it was still disastrous) and Antwan Odom treated his replacement the same way (and Jared Allen followed in his footsteps two weeks later). It wasn't until both Clifton and Mark Tauscher both were "fully" healthy that the sack rate slowed to a trickle. Both are now over 30 years old, and while both have been resigned over the offseason neither was given particularly large or long-term contracts. If the Pack don't grab some potential replacements for these guys this year, they'll be paying through the nose within two more for new tackles. And maybe also a new franchise quarterback. 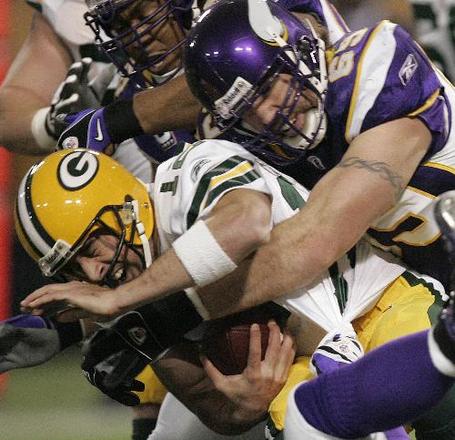 What, me criticize my OL? Why would I do that?

While generally it's good to avoid drafting for need if you possibly can and go for Best Player Available, the Pack's need at OT is too glaring to ignore. They have a few other needs such as a replacement for Aaron Kampman, or at least strong wants such as cornerback and safety depth, but all of those can be filled in later rounds. With both their starting tackles coming off injury-plagued years, they truly need at least one OT out of this draft who "could start in a pinch", and that usually means the first round. So they instead will be going for Best OT Available instead of BPA.Finding an elite tackle at twenty-three overall isn't easy, but there are two strong prospects left. I'm actually somewhat surprised Anthony Davis is still available, as I think he'll go earlier. For awhile I thought he should be the pick here as well, because he looks in some ways more ready to start right away if needed. But upon further review, he really fits more of a power-scheme rather than the zone-blocking scheme the Packers use. He's also had some weight troubles in the past and at least some reports of attitude problems as well. Some project him as a RT or a guard instead, and he also just missed his pro-day due to unexpected illness. I wouldn't be surprised if much of this blows over or even turns out to be mere pre-draft hocus-pocus from teams drafting lower who are just playing games hoping for him to fall, but in the meantime the Pack fans don't want him, and so we turn to the next BOTA.Next up on the list at CBSSports.com (and actually rated higher by the National Football Post) is Charles Brown. As a converted tight end, Brown has only two years of starting experience in college and clearly has plenty of room to grow, yet he already carries a grade of "becomes a starter in his rookie year" by NFP and CBSSports thinks he "might be just scratching the surface of his potential." In fact, according to NFP, Brown is "one of the nation's more impressive left tackle prospects and looks like an ideal zone-blocking left tackle in the NFL." Could you script a better fit if you tried? The only real red flag I see is that he might have some trouble with the bull-rush early on, but he still has plenty of room on his frame to add more lower-body strength, and fortunately the Pack won't be counting on him to start right away, though it might turn out that he does anyway.Charles Brown highlights: