Getting close to the end of our second annual Canal Street Chronicles community mock draft. The Baltimore Ravens are now on the clock and they will be represented by the one, the only HansDat. I will let him take over with the brief yet poignant introduction he wrote for himself. Than make the jump to find out who he picked.

HansDat needs no introduction other than to say that he is a CSC legend in his own mind.

With the twenty-fifth pick in the 2010 CSC community mock draft, the Baltimore Ravens select...

A Tradition of Excellence.

Ravens First Roundabout - In and Around the Way.

Ozzie Newsome - a GREAT Drafting GM, or THE GREATEST???

These titles, subheadings, wastes of time or whatever you want to call them have been bouncing around my head the past few days as I began the intensive stage of collating/organizing the information I have been collecting and analyzing for this mock draft pick. My research consisted of lurking and posting a bit on Baltimore Beatdown (SB Nation sister site of Da Chronic), and then some Wikipedia, walterfootball.com, nfl.com, and espn.com, as well as youtube and various draft scout sites that I can in no way assess their quality. By the way, the members over at BB are much like us - snarky, intelligent, obsessed with their team, fans of Anchorman, a bit quirky/weird/funny (in good ways), friendly, and helpful to mockers like me. I've enjoyed my lurking/posting experiences there.

To say that the Ravens usually "hit" on their first round picks is a bit of an understatement - kinda like saying, "Drew Brees is a pretty good quarterback," or "The Ying Yang Twins deserve a Grammy AND to be U.S. Poet Laureates Emeriti." 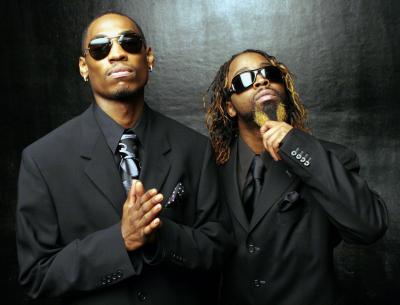 Go here to listen to Ying and Yang display their mad verbal interview skillz. (Disclaimer - I am goofy obsessed with enjoying this waaaay too much and probably watch this clip at least once a month.)

A recent baltimoreravens.com article ranked the top 10 (actually top 11) draft picks in team history, and a whopping 10 of them came from first round selections made in the last 14 years. (The big, obvious elephant in the room caveat is that they have only been in existence for 14 years, but don't let that fact dull the sharp point of my argument piercing your brain like a really sharp stick.)

So you can see why the term of "genius" is often linked to Ozzie Newsome and the Ravens Brain Trust in much of the research I found on their first round draft history. Other terms that kept coming up in my research for the Ravens 2010 draft prospects..."need" "value pick" "plays like a Raven" "best player available" and "best player available is BS and overrated"(does this last one sound familiar?).

Conventional wisdom had the 2010 offseason Ravens in need of help at DL, CB, WR, and TE.

They took care of wide reveiver by snatching up Anquan Boldin, taking a chance on Donte' Stallworth and also re-signing Derrick Mason. I'm not sure why Ochocinco and T.O. are not in the purple, black, yellow, brown and white yet.

In our CSC draft, the Bengals just grizz-abbed up (sorry about butchering your screen name for the sake of a lame "goofy guy as rapping Snoop" joke, GRIZZ) the only tight end getting any mentions in first round Ravens discussions (Gresham), so that leaves defensive line and cornerback as the only positions still showing with top-rated players that might even come close to catching the eye of the "genius" Wizard of Oz with their potential to "play like a Raven."

Both Kyle Wilson and Jared Odrick seem neck-and-neck for the title of "best Ravens pick" in this scenario of draft selections as it has played out on the CSC mockery thus far.

Looks like with what's remaining on the board, I am indeed going to follow Bruce Raffel the head Beatdowner's advice and "...if we sign a cornerback in free agency, then drop that position, but otherwise, go get me a DE, Hans!"

Here's your DE, Bruce - Jared Odrick from Penn State. Ozzie "The Genius" Newsome has decided that Odrick will replace Trevor Pryce and be paired up with Haloti Ngata to create some pass-rush disruptions to opposing QBs that will immediately help improve your beleaguered secondary. (Note: I wanted to take Wilson to leave a chance for Odrick to drop down to our DL-needing New Orleans Saints, but in all good conscience, it felt wrong to use that as motivation for draft selection.)

Odrick is a 6'5" 304-lb specimen who played tackle in college, but projects as a DE in the 3-4 scheme employed by the Ravens, and whom the good folks/ amateur hacks at draftcountdown.com break down like this:

Strengths - Great size with a long frame --- Very good athlete --- Terrific speed and quickness --- Really fires off the snap --- Strong and powerful --- Active with a non-stop motor --- Does a nice job in pursuit --- Has a burst to close --- Uses his hands well --- Able to penetrate, get upfield and can collapse the pocket --- Aggressive --- Competitive --- Smart with superb instincts and awareness --- Hard worker --- Some schematic versatility.

Weaknesses - Doesn't always play with proper leverage --- Not very agile and doesn't move well laterally --- Is not overly stout at the point of attack --- Feet go dead at times --- Gets neutralized by double-teams --- Has trouble getting off blocks once engaged --- Relatively average production and did not make a lot of impact plays --- Some minor durability concerns.

Notes - Last name is pronounced "ODD-rick" --- Was a three-year starter for the Nittany Lions --- Earned All-American honors in 2009 --- Named 1st Team All-Big Ten in 2008 and 2009 --- The Big Ten Defensive Player and Defensive Lineman of the Year as a senior --- Season was cut short by a broken hand and ankle in '07 --- The type who does everything well but nothing great --- Could project to either defensive tackle (three-technique) in a 4-3 or defensive end (five-technique) in a 3-4 --- Not particularly flashy but offers a nice mix of physical tools and intangibles.

Now, instead of a highlights/lowlights package to watch, I have chosen to include the embedment of a video feature piece on him that the users at Baltimore Beatdown have raved about.

OK, CSCers, that's my pick and rationale for the Ravens first choice in the 2010 Mock Draft. I hope you enjoy it, but if not, that's ok, too. I had fun researching and writing it and imagining everyone enjoying it. Remember, I'm a CSC legend in my own mind.

I leave you with this opportunity to karaoke sing-along with me to the Nittany Lion fight song...

Wait!! That's not all. If you call now and order, you get the Ravens fight song, too, at no extra cost. No karaoke, but the lyrics are beneath the video.

The Ravens of Baltimore

On dark wings we fly

Honor bound for the sky

For Glory we vie, and our town will stand high

To our foes we say "Nevermore!"

'Cause its Fight! Fight! With all of﻿ our might!

For our old Baltimore!