The Arizona Cardinals are now on the clock in our second annual community mock draft here at Canal Street Chronicles. They've got the twenty-sixth pick and will be represented by CSC member shn_hldn. After the jump is his pick and write-up.

Sincere thanks to shn_hldn for his participation.

With the twenty-sixth pick in the 2010 CSC community mock draft: The Arizona Cardinals Select...

I guess any pick here for Arizona can't hurt after so many key departures, but I went with the best left on board and was actually surprised to see Golden Tate still there. 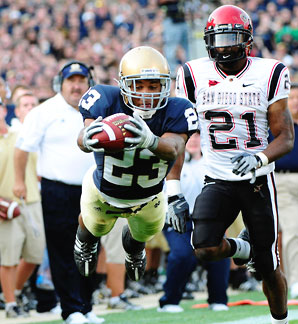 For a team with a multitude of holes, Tate would fill one of them from day one. I thought about an offensive lineman, especially Jared Odrick and Bruce Cambpell. Or tight end Jermaine Gersham to help protect Matt Leinhart. But with Anquan Boldin leaving, I went with Tate.

I actually see Arizona getting an offensive lineman or linebacker Sean Weatherspoon if he is still available. But in reality will probably end up with Maurkice Pouncey (Wondering why we don't hear much about this guy?).