The second pick in the Canal Street Chronicles mock draft will be made by our resident poo slinger, Monkey Poop Battle. He is both a scholar and a gentleman. If your man stopped using lady-scented body wash and switched to Old Spice, he would smell like MPB. A woman once got pregnant simply by looking into his eyes. He is about to throw a handful of knowledge feces your way, so you'd better prepare yourself to catch his nuggets of wisdom. He's on a horse. (Note: Monkey Poop Battle may have written his own intro and forced Saintsational to post it under threat of projectile excrement.)

With the second pick in the 2010 CSC community mock draft, the Detroit Lions select...

Summary of the Detroit Lions over the past decade:

Over the past decade, the Detroit Lions have been the saddest franchise in the NFL. In this period, they've had five different head coaches, no playoff wins, no playoff appearances, only one season above seven wins, and a winless season. It has been pure misery for the fans in the state of Michigan (and that was even before Rich Rodriguez showed up in Ann Arbor). They could really use our sympathy in their time of need . . . that, and a Hot Tub Time Machine.

Perhaps the most damning statistic we can use to highlight Detroit's complete and utter incompetence is this: since the decade began, the Oakland Raiders have won 62 games in the regular season, while the Lions have won only 42 games. In case that point didn't sink in, let me yell it to you via all-caps: THE OAKLAND RAIDERS ARE MORE THAN A PERFECT SEASON BETTER THAN DETROIT OVER THE PAST DECADE! Somewhere in this world, an angel just died. And Al Davis has stolen its life force so he can live for another 100 years. 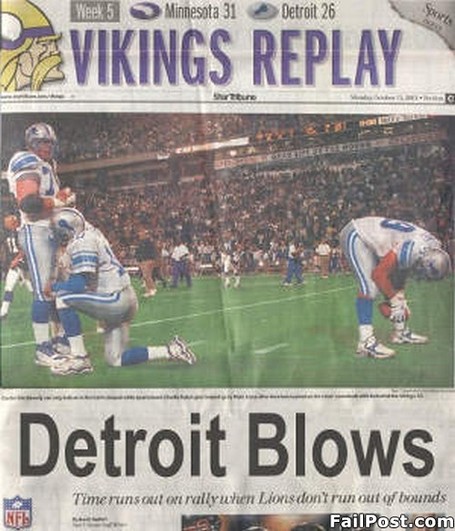 A picture is indeed worth a thousand words

The Detroit Lions on Offense:

Because of their show of ineptitude, the Lions are the owners of the 2nd pick in the 2010 draft. When you only win two games in a two year period, it is clear that you need help almost everywhere. One position the Lions look to be set for a while, however, is at quarterback. After spending last year's number one pick on Matthew Stafford, there is no chance they will spend their 1st round pick on another QB. Unless they hire Matt Millen back as their GM. Then all bets are off.

Running back is an area of need for the Lions. Kevin Smith, while a competent running back when healthy, is coming off of a late-season injury that may sideline him for the beginning of the 2010 season. Maurice Morris filled in at the end of last season, but typified the problem with the Lions running backs: they are really lacking an explosive player. Unfortunately for the Lions, it does not appear that there are any top shelf running backs in this draft worth the number 2 pick. Chances are the Lions will either try to grab a late round RB or pick up a free agent to fill this need. They might even try to steal restricted free agent Mike Bell from the Saints, a distinct possibility if Mickey Loomis doesn't dig his cleats in the ground to try and keep him.The Lions have a beast of a #1 wide receiver in Calvin Johnson, but could use an upgrade behind him. For a team that spent four top 10 draft picks since 2003 on the WR position, you would think they would be stacked. Like running back, it is hard to find a WR in this draft worth the #2 pick, and if the Lions spent a fifth 1st round pick on that position, it is quite possible the city would riot. Tight end is an unlikely pick as well, since tight ends rarely get drafted this high, and the team likes last year's draft pick, Brandon Pettigrew.

The one spot on offense that the Lions might look at with their first pick is offensive tackle. Last year, Detroit QBs were sacked 43 times during the regular season (as compared to the Saints QBs only getting sacked 20 times). There are some very good OT prospects in this draft, highlighted by Russell Okong from Oklahoma State, Trent Williams from Oklahoma, and Bruce Campbell (the one without a chainsaw for an arm) from Maryland. While the Lions could stand to upgrade their offensive line as a whole, their problems seem to be at the guard position (particularly on the left side) and right tackle. Jeff Backus, their current left tackle, might even be the strength of their O-Line (yeah, I know, that's kind of like saying Pauly D is the most likable cast-member of the Jersey Shore). Still, it will be tempting to use a high draft pick to protect their developing QB's blindside. 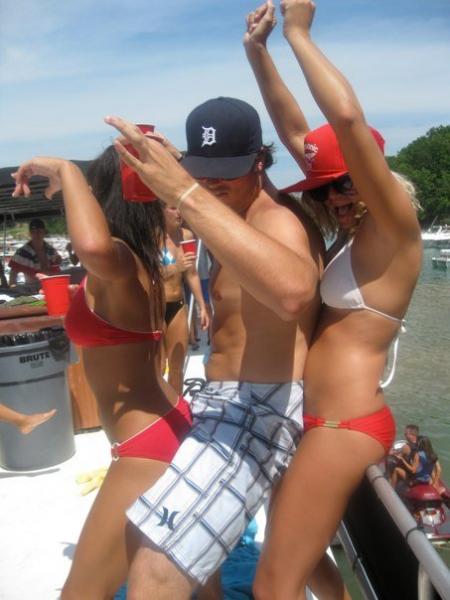 "Why yes, I could use some protection . . . oh, wait, you meant on the offensive line"

The Detroit Lions on Defense:

Football Outsiders (the best NFL statistical website) determined that the Detroit Lions ranked dead last on defense for the 2009-2010 season. We watched Drew Brees start out the season torching the Lions defense with 6 TD passes, and it only got marginally better from there. There are some positional groups that might be better served with Abe Vigoda and Betty White than what they are currently fielding.

The linebackers for Detroit are currently in a state of flux. Larry Foote may move on to another team, and the Lions are currently trying to restructure Julian Peterson's contract. How all of this plays out may affect Detroit's plans on drafting a linebacker. While top linebacker draft prospects Rolando McClain from Alabama and Sergio Kindle from Texas are both good, they might be a reach at #2.

The secondary might be the biggest weakness for the Lions, but they do have a bright spot in Louis Delmas at safety. Pairing him up with Tennessee's Eric Berry, the best safety prospect in recent drafts, is a real possibility, even if safeties almost never get drafted this high. Berry is that good. Cornerback is also an area of extreme need. Signals from Detroit's front office suggest that they might try to address this need though trades and free agency rather than the draft. In recent days, rumors have swirled about a possible trade for San Diego's Antonio Cromartie, and the name Pacman Jones has even surfaced. 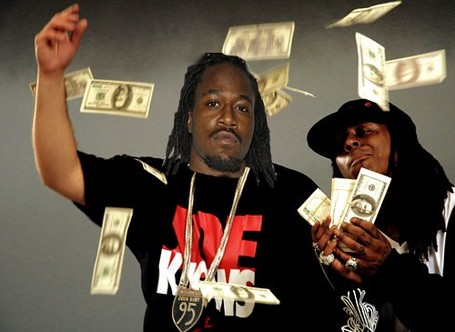 "Hey Detroit, if you liked Cash for Clunkers, wait until you see ME make it rain!"

The position group that the Lions will most likely spend their first round pick on, however, is the defensive line. Over the past few years, the Lion D-Line has been about as effective at stopping the runs as a bran muffin. While a good defensive end would usually occupy such a high draft position, this year's draft features two of the best defensive tackle prospects to come out of college in quite some time: Gerald McCoy out of Oklahoma and Ndamukong Suh from Nebraska.

And the Final Rose Goes to: 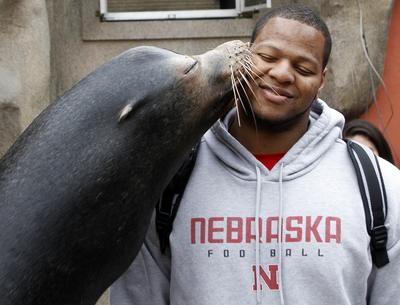 I know what you're thinking, and the answer is yes. He is going to eat the seal.

McCoy and Suh are absolute monsters, and the Lions can't go wrong with either one. Both have all the measurables, both are high character guys, and both project to have an immediate impact on whatever team drafts them. However I predict that the Lions will pick Ndamukong Suh for one simple reason: every time I watched him this past year, he absolutely demolished his competition. There was no question that he was the most talented player on the field in every game he played, and that includes when he was on the field against Texas in the Big 12 championship game. Last year, he registered 82 tackles, good for best on his team (DTs almost never lead their team in tackles). He also had 12 sacks on the year, and in 2008, he even had 2 interceptions which he returned for touchdowns (one for 49 yards, and one for 30 yards). The knock on supremely talented DTs is usually that they take plays off, but I have never seen Suh take a break for even one. Heck, he even caught a pass for a touchdown in the clip below:

"What's that Matt Millen? You want to draft ANOTHER first round wide receiver! Um, why don't you take a look at some footage of this prospect, Ndamukong Suh. No, he's definitely a wide receiver, we swear!"

So with the 2nd pick, the Detroit Lions will take Ndamukong Suh. He will hopefully shape up to be a force in the middle of their line for the next decade: a hybrid run stopper, pass pressure defensive tackle. Plus, just imagine the number of aneurysms play-by-play announcer Joe Buck will have trying to pronounce his name! For the sake of all Lions supporters, I hope this works out. There is only so much misery the fans can take, only so much embarrassment the organization can withstand, and only so much frustration Angry Hitler can endure.