The Kansas City Chiefs are now on the clock in our second annual community mock draft. Representing the team with the fifth overall pick is member coldpizza. He continues the tradition of well researched, well written mock draft posts chock full of pictures and videos.

Make the jump to find out just who he thought would best suit the Chiefs this year and offer the most help to a team with quite a few needs.

Sincere thanks to coldpizza for his participation.

With the fifth pick in the CSC community mock draft, the Kansas City Chiefs select...

While their arrowhead may point towards the right, the Kansas City Chiefs are a team on the rise. That's because when you're one of the absolute worst teams in the NFL, there's nowhere to go but up. Let's put their futility into perspective. If the Chiefs could somehow combine their ten victories over the last three seasons, they would have STILL finished three games behind the San Diego Chargers in 2009. The lowly Oakland Raiders also call the AFC West home. For most professional football teams, that would equate to two cakewalk games each year. Not the Chiefs. They've managed to split with the Raiders in each of the past three seasons, while finishing either below or tied with Oakland in all of those campaigns. 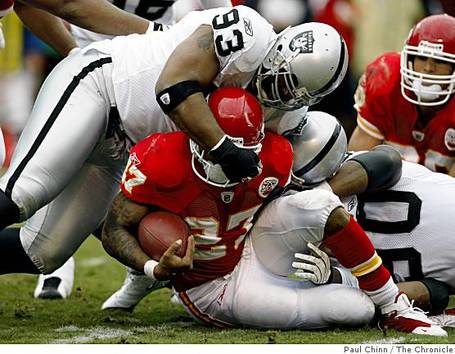 It hasn't always been this way in Cowtown. The Chiefs were a perennially competitive team as recently as the mid-2000s. Much of that success stemmed from their potent ground attack, led by late-bloomers Priest Holmes and Larry Johnson. Holmes, as you may remember, sat second on the Ravens' depth chart for four seasons, collecting dust behind Jamal Lewis, before signing a modest UFA contract with the Chiefs. It was there that he blossomed into one of the NFL's most productive RBs of the last decade. Johnson, a first round selection two years later, sat behind Holmes for two ignomimous seasons, before a series of hip and spinal injuries caught up with the former. That torch has since been passed to promising newcomer Jamaal Charles. Charles caught fire at the tail end of just his second year, reeling off four straight 100+ yard rushing games, including a franchise record 259 yard effort in the season finale against Denver. 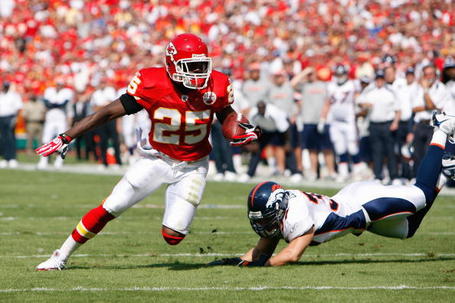 So, business as usual in the running game, you say? Not so fast. While Charles has shown flashes of brilliance, he has yet to lead the league in rushing, something Holmes accomplished straight out of the gate in 2001. He also didn't come anywhere close to the 194 yards per game rushing average his malcontent predecessor racked up in 2005. By comparison, Charles's rise to success hasn't been meteoric whatsoever ... and maybe that's a good thing. Meteors have been known to crash and burn in this Midwestern metropolis all too often. Should we go ahead and add Mike Garrett, Woody Green, Joe Delaney and Christian Okoye to this ominous list? The mere fact that Holmes and Johnson rank first and second on the all-time Chiefs rushing list, despite having only started 63 and 48 games respectively for them, should speak volumes as to the staying power of Kansas City running backs. This isn't exactly an expansion franchise, folks. We're talking about an organization about to enter its 50th year of existence. 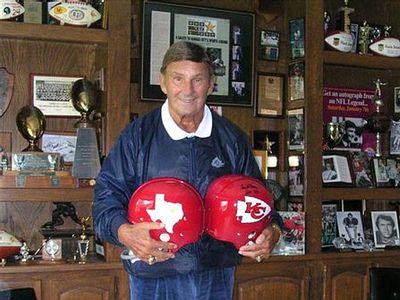 In order to buck this trend, there are three primary factors to consider. First, you need a dynamic running back. At the very least, Charles has the potential to satisfy that requirement. Second, you need offensive balance. Hand off to any running back 400+ times in a season and you might as well start singing "Funky Nassau", because that's the Beginning of the End. 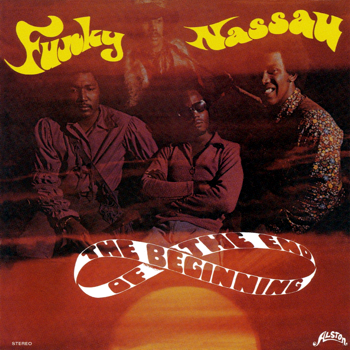 The Chiefs's roster isn't exactly teeming with playmakers in other areas, but they're at least serviceable. The team already has a lot invested in Matt Cassel at quarterback. Receivers Dwayne Bowe (size), Chris Chambers (speed) and Lance Long (dependability) all bring something different to the table. The tight end position remains unsettled since Tony Gonzalez's departure, though Brad Cottam will be returning from injured reserve, so that should help. Above all else, there truly aren't any offensive weapons worthy of the fifth overall pick in the draft. 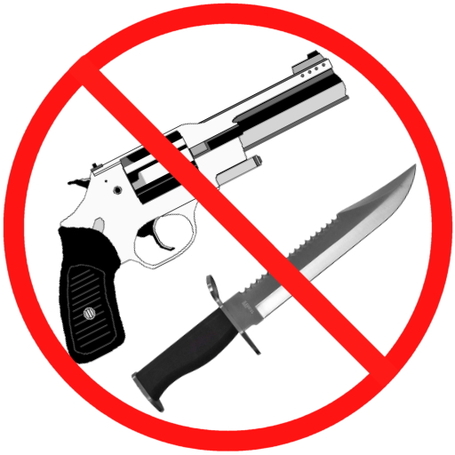 That doesn't mean there aren't available players that could hep the Chiefs attain that elusive balance, in conjunction with the limited weaponry they already have in place. They're just not the glamorous type. They're the grunts. The hogmollies. The corn-fed Gorgs that get 'er done upfront. Future Hall of Famers Willie Roaf and Will Shields had just as much to do with that mid-decade uprising as Holmes and Johnson did, if not moreso. Not only did they open up the gaping holes that sprung those talented backs, they also kept Trent Green upright and healthy. They allowed Green the time to make the most of his own limited weaponry. 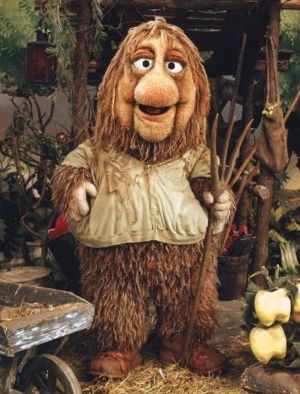 NOW is the time for the Chiefs to get back to that mindset on offense. Give a young, vibrant Jamaal Charles the same lanes those older guys had to work with. Let's see what he can REALLY do in space. Keep Cassel off the turf 47 and 42 times each season, before you're FORCED to spend a draft pick on yet another worthless quarterback. 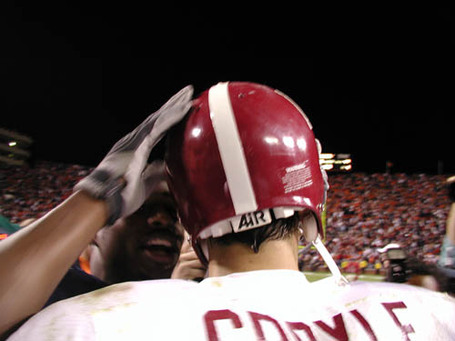 Since his first round nap in April, Branden Albert has proven to be a bold step in that direction. When awake, here's a guy capable of playing every position on the offensive line -- which makes him incredibly valuable, in terms of versatility -- but he's at his best at guard. He completely dominated at that position at Virginia. In a lot of ways, Albert represents Will Shields in 2006, the year after Willie Roaf retired. The primary difference being that, although Shields was clearly the Chiefs best offensive lineman that season, he wasn't cut out to be a left tackle in the NFL, so they kept him at the position at which he most excelled. Too bad the Saints didn't take the same approach with Jammal Brown at right tackle. I digress. 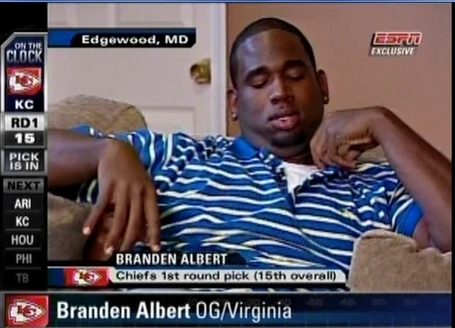 Regardless of how well Albert played the left tackle position in 2009, he's not TRULY a franchise left tackle. He's simply the best offensive lineman on the current roster, who just so happens to be capable of manning that all-so-important position. By no means is that a knock on Albert. He's a phenomenal young talent with a world of potential. That being said, let's take a peek at the rest of the Chiefs's offensive line, shall we? 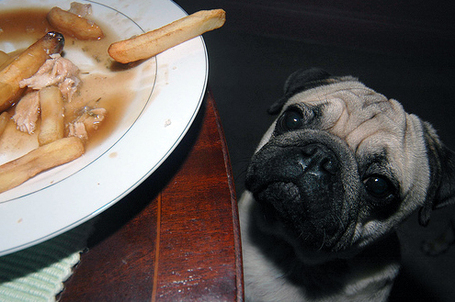 Color me an analytical p**** if you want to, but that's either a whole lot of unrecognized talent coming out of college, or a complete hodge podge of table scraps. On top of which, Niswanger is a RFA, meaning there's no guarantee he'll be back. In summary, we're talking about a team with a grand total of FIVE offensive linemen on their roster, TWO of which were drafted, ONE of which is pushing Shields's retirement age ... and only ONE of which could POSSIBLY play center ... but would have to be paid first round duckies, in order to do so. In case you can't do the math in your head, this adds up to nothing short of a piecemeal clusterf***. No, make that a clown college clusterf***. One, because I've grown to dig the term "clown college". Two, because the alliteration makes me giggle. 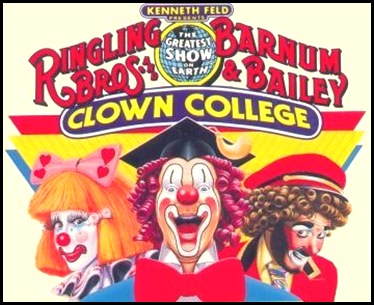 With all of this in mind, the Kansas Chiefs have opted to follow suit, joining their Redskin brethren in the selection of a true franchise left tackle. At 6'6" 314 lbs, Bruce Campbell recently ran a 40 yard dash time of 4.85 at the NFL Combine, to lead ALL offensive linemen in the drill. He also turned in an impressive showing in bench presses with 34 reps of 225 pounds. His 36 ¼ inch arms are the longest of any player at his position in the draft, giving him a physical intangible in both leverage and separation that cannot be taught. How good is he in pass protection? Good enough to buy unheralded quarterback Chris Turner enough time, to help make Darrius Heyward-Bey the first wide receiver taken in last year's draft. In run blocking? With Campbell's help, Da'Rel Scott became the first Maryland ball carrier since 2002 to eclipse the 1,000 yard rushing mark. 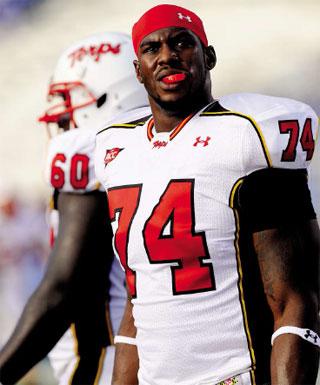 Above all else, he is a patriotic man mountain of a wildebeest that can utter the phrase "Klaatu barada ... necktie ... nectar ... nickel ... noodle ..." without being prompted to do so. 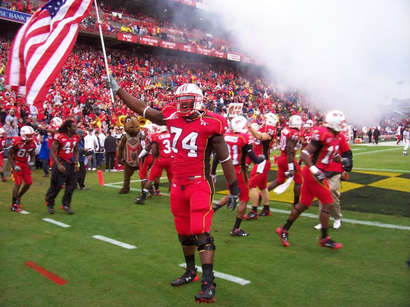 Campbell is entering the draft as an underclassman and will not turn 22 years old until May 25th. He remains a raw talent, but has a tremendous amount of upside, as well as the drive and determination -- as evidenced in his Combine performance -- to excel on the next level. His presence should immediately challenge Albert's dominance within the Chiefs' offensive line ranks. They're both from ACC schools and close in age. This should lead to friendly competition and ultimately, perhaps one of the more formidable offensive tackle tandems in the NFL. There's nothing etched in stone that reads "Branden Albert will be starting at guard in September". With six rounds remaining in this draft, other areas of need will inevitably be addressed. There's also several weeks of training camp between now and the regular season to sort all of that out. If it turns out Albert is best suited at right tackle, then that's where he'll wind up. If it's at his natural position (guard), then we may be talking Roaf-Shields part deux. Either way, it's a win-win for the Chefs.


There were five other players I considered with this selection, all on the defensive side of the ball: safety Eric Berry (Tennessee), cornerback Joe Haden (Florida), defensive ends Derrick Morgan (Georgia Tech) and Jason Pierre-Paul (South Florida) and linebacker Rolando McClain (Alabama). Ultimately, it came down to value. All four of those positions can be addressed in later rounds. Conversely, getting a cornerstone for your offensive line outside of the first round, is damn near impossible.

Oh, and that "no guns and knives" signage you may have spotted about nine paragraphs back ... it didn't really mention anything about 36 ¼ inch chainsaws. :)