We're already up to the sixth overall pick in our second annual CSC community mock draft. Representing the Seattle Seahawks is member and contributor, MtnExile. To find out whom he deems worthy of Seattle's first pick of the draft, make the jump.

A hearty thank you to Mr. MtnExile for his participation.

With the sixth pick in the CSC community mock draft, the Seattle Seahawks select...

Seattle is desperate for just about every kind of help imaginable, including--perhaps especially--quarterback. They missed out on Matt Ryan and Joe Flacco in 2008; they made the mistake of passing on Mark Sanchez in 2009; and they have a new coach, Pete Carroll, who will certainly want to have "his guy" behind center. All the indicators point to Jimmy Clausen wearing Seahawks colors (whatever they are...blue? green? grey?) in 2010. So how come Clausen isn't coming off the board here?

I actually believe, given the conditions of this mock draft so far, that drafting Clausen is exactly what Carroll and the Seahawks would do. I just don't agree. I don't trust Clausen. He has the stats (but not the wins); he has the arm, the mechanics, the intelligence, the pro-set experience. He's supposedly the most "NFL-ready" quarterback in the draft.

But he's also (so far as I've heard) the only quarterback prospect who's been in a bar fight with his own fans. He's the only one who has been dogged continuously with rumors that he's immature, arrogant, selfish, spoiled, and totally lacking in leadership skills. He's the only one who had to answer questions from the media at a special press conference at the Combine to address his character--and his answers were particularly poor. 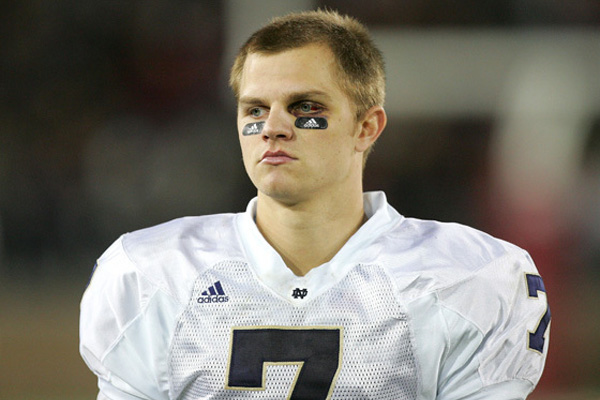 "Some people say I'm cocky, I'm arrogant, that I'm not a good leader or a teammate." (Yes, that's what people say, all right. A lot of them. Including his own teammates and fans.) "The people that are out there saying that don't know me as a person." (Perhaps they already know him as well as they ever want to.) "I'm a humble kid.'' (In his own humble opinion.)

Clausen tried to pin the blame for the bad hype on his situation as big fish in college: "It's a tough situation being in the fish bowl at Notre Dame.'' Fish bowl? The NFL is a shark tank. If Clausen's character issues stood out in college, what will happen when he's behind center in the NFL?

I wouldn't go so far as saying that Clausen will be the next Ryan Leaf...but he doesn't have to be. Only the next Brady Quinn. The next Rex Grossman. The next J.P. Losman. Perhaps, even, the next Jay Cutler? The next college phenom who--for whatever reason--simply couldn't handle the step up to the NFL. I don't trust him, and I wouldn't draft him.

Eric Berry, on the other hand, is the anti-Clausen. He's a consensus pick for the most talented safety in a decade; he's widely considered to be among the top three best players in the draft; and he's also one of this year's true "high character" guys.

On the field, Berry is the real deal. Unlike Taylor Mays, the trendy pick who will turn out to be Roy Williams in the NFL, Berry is the legitimate successor to Ed Reed. And anytime you can draft a player with a good chance to be a Defensive Player of the Year sometime in his career, you jump on it. 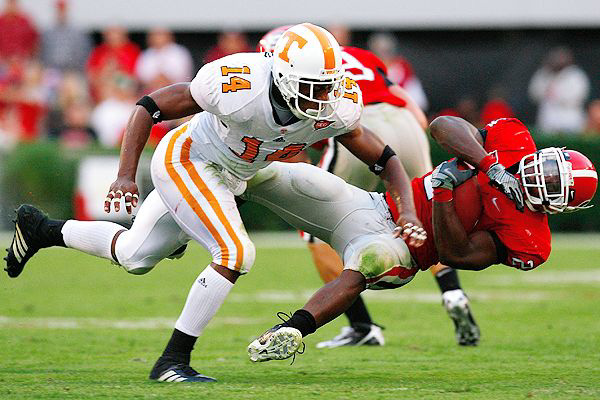 Berry is one of those few individuals where it just seems like this is what he was born to do. He is a natural on the football field with the intangibles to boot... What really impresses me about Berry is he reportedly played all of the 2008 season with a nagging shoulder injury, which he then had surgery on in December. Berry is the No. 1 prospect in the 2010 NFL Draft, in my opinion. Player Comparison: Ed Reed. Both players are 5-11 with a surreal knack for the game of football and have the ball skills, range, and playmaking ability you look for. [WalterFootball.com]

With comparisons a plenty, the closest person that Berry’s game resembles is that of All-Pro Ed Reed. Both have outstanding instincts and can break on the ball better than most. They also both play the game very intelligently, as they are great at baiting quarterbacks into bad throws and capitalizing on mistakes. The instant recognition of routes and tendency’s an offense has makes these two appear to be psychic. [NFLDraftDog.com]

Read & React: One of his greatest assets. Shows uncommon discipline, reading the play completely before making his move. Rarely fooled by play-action or misdirection or beaten over the top due to taking false steps. Reads screens at the line of scrimmage, but waits until the quarterback is making the throw before accelerating to the ball. Good burst and accelerates smoothly. Takes very good angles to the ball. Good body control and times his leaps very well to compete in jump-ball situations with bigger receivers... Man Coverage: Unique agility and straight-line speed for a safety. Often was asked to drop down as the nickel cornerback, showing good flexibility, balance and acceleration to turn and run with receivers. Can flip his hips, plant his foot in the ground and drive to mirror receivers' routes. Good physicality in press to re-route the slot receiver or tight end. Rides receivers for a few yards to disrupt timing with the quarterback. Times his leaps well and has natural ball skills... Intangibles: High character, high-effort player. Coaches rave about his leadership qualities and instincts. Started all 39 games of his career, including 14 as a true freshman. Voted team captain as a sophomore and junior. Competes on special teams despite his All-American status...[CBS Sports]

Berry may be a once-in-a-generation player--measured in NFL generations, that is: Ed Reed, after all, is about to retire just as Berry comes on the scene. If Seattle believes in reincarnation, this is an easy pick.