We continue to move along with our second annual Canal Street Chronicles community mock draft as the Cowboys make the next selection. Representing Dallas will be CSC member saints fan in cowboyland! See which prospect he decided to choose for the Cowboys by making the jump.

Many thanks to saints fan in cowboyland! for his participation.

With the twenty-seventh pick in the 2010 CSC community mock draft, the Dallas Cowboys select...

The franchise formerly known as "America's Team" feels they are primed to be the first host team in the Superbowl. The Who Dat Nation might have something to say about it, but that's another story.

If this were an actual draft, I would try to trade a pick late in the draft and swap picks with Arizona because I'm not sure a wide receiver is the Cardinals' primary need at this point. Golden Tate would be a good fit for Dallas though.

The Cowboys have a couple of glaring needs. Their offensive line is getting a little long in the tooth. Colombo and Flozel "The Hotel" were average at best this year. Flozel Adams made the Pro Bowl on reputation alone. The interior of the line is overrated. If Leonard Davis isn't playing for a contract, he's a bum.

Another need is a playmaking wide reciever to go with Miles Austin and Jason Witten. I actually like second year player Kevin Ogletree, but Jerry Jones only plays who he pays (Roy Williams). If Dez Bryant or Tate are available, the Cowboys will go there.

Since the NFL is a copy cat league, everyone is now looking for a play-making safety ala Darren Sharper. In this draft, the top safeties are already gone at this point. I hear on the radio all the time about the Cowboys possible interest in Sharper. I hope that doesn't happen. I believe that safety will be a priority later on in the draft.

I believe the smart choice is adding young depth on the offensive line. Anytime you can draft a player that can fill two roles, it allows more roster spots at other areas of need. That's why I like Maurkice Pouncey of Florida. He can play center and guard. Injuries to the interior of an old O-line are almost inevitable. There is a lot of talk of cutting Adams and moving Doug Free to left tackle. I believe that would result in Witten having to stay in and help Free with blocking duties a lot. Romo relies to much on Witten as a primary target for that to happen. They should go with the line as is. Cohesiveness is important if you want to win but with an eye on the future, the selection of Pouncey could pay off down the road a bit. 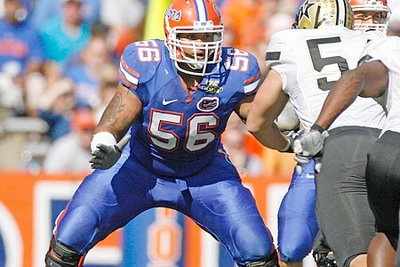