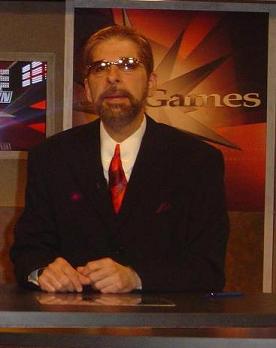 Last week I found some great, in-depth player profiles for many of the prospects in this years draft that had been distributed by the NFL. Upon my email search for permission to use this information on CSC, I found Dave-Te' Thomas of Scouting Services, Inc. and the man responsible for putting these impressive profiles together.

Dave-Te' has been involved in professional football since the late '60s from the age of fourteen and remains busy to this day as a scout providing information to NFL teams and as the leagues official player biographer, among other projects.

But make no mistake; Thomas does not "pull punches" when it comes to his assessment of players and unlike guys like Mel Kiper and Todd McShay, he "deals with reality, not conjecture." What follows in our conversation are his honest opinions from years of experience, getting right to the point when it comes to potential Saints draft prospects, who the team should or should not select and how they should go about doing it in this years new format.

What better way to get pumped for tonight's big draft than with a one-on-one interview with the outspoken man who knows all of the prospects better than anyone and is responsible for providing that information to the league?

Trick question; there is none. So enjoy.

I would like to thank Mr. Thomas for taking the time to answer these questions. As you could imagine, this is his busy season.

CSC: First give us a little background on yourself.

Dave-Te': I was hired by the league in 1968 at age 14, was a protege of Jim Finks in the early 70s and later with George Allen. George brought me to the USFL and I later moved on to the Memphis Showboats. For 20 years, I was on the selection committee for the Blue-Gray Game. For nine years, I selected talent for the Hula Bowl. I assisted coach Bob Blackman for a decade in selecting the East squad for the East-West Game. In 1985 after the USFL folded, I was brought back into the NFL and Scouting Services Inc., a scouting information service used by 27 teams in the league.

Folks are more familiar with me as the editor of "The Poor Man's Guide to the NFL Draft" and now "The NFL Draft Report." I am also the league's official player biographer, as all media guide material up to their pro days comes from me. For twelve years, Chet Coppock and I did the Sports Talk show in the Northeast. In addition to football, we provided scouting services for the NBA and in baseball, for the Yankees.

CSC: Do you have a preference between the college and professional level?

Dave-Te': Being a scouting service, I pride myself on discovering talent. Look at the Sam Knights, the Ike Taylors, the Tom Bradys. That is what is the success of the game. Finding players others say can't play the game and proving those 32 Doubting Thomases (NFL GMs) wrong. A good scouting group has the makings to find the late round and free agent gems. With so many schools and so many players, give me the diamond in the rough, the needle in the haystack types and I feel that I've earned my paycheck that week.

CSC: Do you have a personal favorite team that you follow closely?

Dave-Te': Because of my line of work, along with 27 teams contracted for my scouting service, I try to take a non-bias approach but I do favor the underdogs. One of my all-time favorite players was defensive tackle Doug Atkins, so I might be more inclined to be a Saints fan. Seeing the team at its pinnacle right now has me smiling like a Cheshire cat - grinning from ear-to-ear.

I have always regarded Drew Brees as the elite of quarterbacks. Yes, Peyton Manning is regarded as the NFL's poster boy, but look at the approach Brees takes to the game. He's a thinking man's quarterback, one who plays as if he is one of the boys, rather than worry about what marketing venture he can attain out of a victory or thirteen.

I like the staff in place, feeling the final piece of the puzzle was when they brought in Gregg Williams to run the defense. Now, if they can only realize that Reggie Bush is just another player and not the expected Messiah, they can capture a player at the tail end of the first round of draft day I feel will be their missing ingredient: Ryan Matthews from Fresno State - a bruising back in the Deuce McAllister mold. Or Stanford's Toby Gerhart later in the second day.

One other player I'd love to see wearing Saints colors is Jason Worilds out of Virginia Tech. For the aggressive nature of the NO defense, he is the pass rushing demon that Williams can convert into the next James Harrison. Follow this draft formula and I will forever use my grocery bags for that purpose, rather than cut holes out and wear it on my head.

CSC: Since you brought it up, who then should the Saints be picking?

Dave-Te': My first choice would be a cornerback in Devin McCourty. Though it might not be a pressing need, the kid is a bull in a china shop as a tackler, the best kick blocker in college and a pretty cool return man. In round two, they can find the steal of the draft in a DE/OLB pass rusher in the James Harrison mold: Jason Worilds from Virginia Tech. I am a firm believer in never judging a book by its cover, as I take teams deep inside the stats to show exactly what happened. Hey, I have to make sure Ray Charles can see what these guys can do.

Also, if I was the Saints GM, I'd park my ass on the phones until I get old Bill & the Pats drooling for that first rounder in exchange for a few two's. The second round, my friend, is going to be the most important round in this draft. Why? Well, in previous years, the first three rounds were bam, bam, bam. This year, after round one, teams get to go home and look at their draft board before round two comes up on Friday. They will see a few diamonds still shining out there and try to stockpile picks. Bet you dollars to donuts (poor currency exchange there unless it is for Krispy Kreme) that more 2011 first round picks will be traded for 2010 second rounders than anyone can imagine. Round four is going to be just as active I feel.

CSC: How do you compare to guys like Mel Kiper and Todd McShay?

Dave-Te': I am not Kiper or McShay, as I deal with reality, not conjecture. I do not pull punches in my assessment of players. Case-in-point: Most draft "experts" are predicting Sean Weatherspoon as the Saints first choice. I do not see Weatherspoon as an outside linebacker. Too stiff to get back in pass coverage. I feel this is a kid that is more "me first" oriented than one that performs within the system. He makes Joey Porter look like a mime the way he runs off at the mouth and I feel that a rookie like him will be a disruption in the locker room whom the vets will shortly duck-tape to the goal post.

Yes, defense is a priority. But with a slew of 3-4 type college defensive ends willing to convert to linebacker still around on the second day, like Jason Worilds or an Eric Norwood type, I'd much rather see a defensive tackle like Jared Odrick from Penn State or Tyson Alualu from California taken to plug the middle. That is, unless a running back like Ryan Mathews happens to slide. Then it would be a no-brainer what Mickey Loomis needs to do, despite the presence of Mr. Thomas as their inside ball carrier.

CSC: The Saints attempted to trade up for Beanie Wells last year so I think they're going to target a running back again this year. Give us a running back run-down.

Dave-Te': Mathews is the only running back I'd target in round one. I am not a C.J. Spiller or Jahvid Best fan, feeling both are a poor man's Reggie Bush and honestly: Did the Saints get  "bang for their buck" with that guy? Later in the draft, I like Toby Gerhart, as his red zone carry ability (20 of 28 TDs last year came on goal-line plays) is like playing the lottery - he's a "pick six" winner every time out.

A few sleepers in the third or later rounds are Dejie Karim from Southern Illinois, a version of ex-Giants running back Tiki Barber, who can be a steal later in the draft. Or a local kid, Charles Scott out of LSU. I also think the Tigers have a huge draft steal in Keiland Williams and James Starks from Buffalo should be a mid round target. If he didn't miss last season with shoulder issues, he could have been a top 60 pick.

Buyer beware labels need to be attached to Spiller and Best, along with that oh-so uninspired Jonathan Dwyer from Georgia Tech, who will send some GM to the unemployment line.

CSC: Which coaches and front offices have been great at drafting? And who have been worst? Where do the Saints fall in that spectrum?

Dave-Te': The best is Bill Polian's crew in Indianapolis, but for value shopping nobody tops the New England front office. Just look at what "Parka Bill" has done later in the draft.

As for the Saints? In the middle of the race. They got some nice mid-round steals and Mickey Loomis is 5-for-7 on first rounders, but Reggie Bush and DT Johnathan Sullivan? Unfortunately, the draft does not have a do-over button.

The worst? Duh! The Raiders, silly. Al Davis needs to rub the fuzz on the tennis balls attached to his walker, scream at the nurse for more "puddin'" and get a fix for that organization by replacing his feeble mind. Jerry Angelo in Chicago must have some nasty pictures of the owner. How else can you explain his draft disasters up in the Windy City.

CSC: Who are some of your all-time favorite players either on the field or off?

Dave-Te': Well, Doug Atkins for one. Old Colts LB Mike Curtis' pictures were plastered all on my wall as a kid. In today's group, I follow one of my discoveries a lot, former ULL cornerback Ike Taylor with Pittsburgh. Oh, I'd love to see him in a Saints uniform. Can he attack people or what? I always felt he was overshadowed in college by Charles Tillman, but doubt if the Steelers will say bye-bye to him any time soon. As for quarterbacks? Oh, keep Manning, Brady and crew - I can win it all time and again with a "Cool Brees" running my ship.

CSC: Anything else you'd like to let NFL fans know about?

Dave-Te': Just look for my launch on the Fox Sports web site beginning the 2010 season. Thanks!