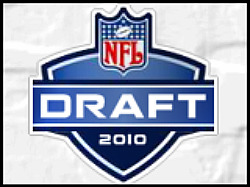 The moment we've all been waiting for since the final float stopped rolling in the Saints Super Bowl victory parade: The NFL Draft! Will the Saints pick the player you've been hoping for the last two months? Will they be able to wait until the end tonight or will they pull an exciting trade out of their hat and shock everyone? We will soon find out.

You guys all know how this open thread stuff works. If it gets crowded, I'll open up an overflow thread.

Don't forget about our live draft podcast tonight. The start time is set for 9pm central but it's really still TBD, dependent on how quickly the draft moves. Just be ready.

In case you weren't here this morning, you'll definitely want to check out my awesome interview with professional scout, Dave-Te' Thomas. Might learn a thing or two.

For a little levity, CSC member Joseph William Stern hit us with some last minute comedy. Pretty funny stuff and sure to be rec'd to the top shortly.

Here are some other informative posts relating to the draft you may want to read:

After the jump, you'll find the final results of our first ever Canal Street Chronicles community draft board, where you guys voted for your top 20 Saints draft prospects.

You can find any and all of these draft-related posts in our 2010 NFL Draft section, on the left sidebar. If you have any questions about the draft, chances are that's where you'll find your answer.

So without further ado...I give to you the first post-Super Bowl championship draft in New Orleans Saints history.