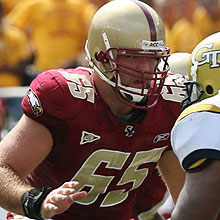 Trading to get into the fifth round of the 2010 NFL Draft, the Saints have selected Matt Tennant, center from Boston College.

Can't say I didn't see this one coming. To quote myself two hours ago...

Pay attention though, because the team has been known to trade next years picks to get back into this years action.

That's exactly what the Saints just did, trading their 2011 4th round pick to the Jaguars and jumping into the fifth round to grab Tennant.

I'm okay with this pick, though I guess I should just give up my hopes and dreams of the team drafting an outside linebacker. Or any linebacker for that matter. The Saints are pretty thin at center behind veteran starter Jonathan Goodwin so this gives the team a chance to groom someone and have them locked and loaded when Goodwin's time comes to an end.

While he'll need to get much stronger for the NFL, Tennant has great length. He uses that to get inside the pads of rushers and drive them back. He has functional upper body strength and really puts it on display on running plays. If he could do a little better in space and increase his foot quickness, he could be a starter at the next level.

Weaknesses:
Does not have the ideal bulk that you look for --- Not overly strong or powerful --- Gets pushed back --- Has trouble sustaining and will fall off blocks --- Won't get huge push in run game --- Plays too high at times.

Notes:
Was a three-year starter for the Eagles --- Named 2nd Team All-ACC in 2009 --- Voted a team captain as a senior --- Was a finalist for the Rimington Trophy, given to the nation's top center, in 2009 --- Will attempt to follow in the footsteps of former BC pivots Tom Nalen, Damien Woody and Dan Koppen, who all found great success in the NFL --- The type who does everything well but nothing great --- Not flashy but has the ability to compete for a starting job at the next level.