We're actually taking a step back in our second annual community mock draft here at Canal Street Chronicles, thanks to my stupidity. Yesterday, I skipped right over the Chargers 28th pick and went right to the NY Jets at twenty-nine. So pretend like it never happened and tomorrow, we'll get back on schedule with the Minnesota Vikings' selection. CSC member Drew D will be representing the Chargers today. Make the jump to read what he had to say.

My sincere thanks to Drew D for his participation.

With the twenty-eighth pick in the 2010 CSC community mock draft, the San Diego Chargers select...

Out of all the research I have done and articles I have read (not a Chargers fan) about defensive end needing an upgrade or cornerback depth being an issue, LaDainian Tomlinson's exit from the powder blue has to be the deepest gash in their armor. If this issue was not addressed in free agency then the draft would be the prime time to bring in your 20-touches-a-game back. Don't take this the wrong way but Darren Sproles is not the answer to this issue. 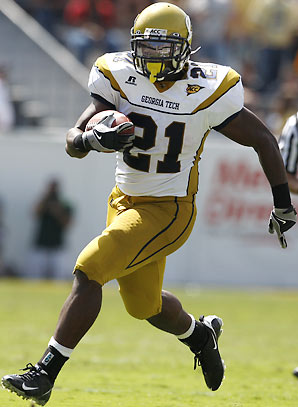 Jonathan Dwyer may not be the answer either but I believe he could survive the grueling season as your short yardage back. At the same time I say he would be a third down back, but his college career totally discredits that notion. He is a quick, downhill, one cut, tackle-shedding runner that rarely gets caught from behind. Sound familiar?

No, he is no LaDainian; but who is? Who, either in the draft or in the league today, could be compared to what LT has done for that organization. But it is time to move on. It is time for Darren Sproles to show us what all of the fuss is about but he needs help and I believe Jonathan Dwyer is the man for the job.

With the way the Chargers are heading, they need a pass blocking, receiving back that can help in all facets of the game. No, Jonathan was not a touted receiver in college but considering the options he the best remaining in the draft. Jonathan Dwyer is the smartest pick that could contribute from day one with not much competition other than Darren Sproles. I wouldn't be surprised if he is a starter by week one (write that down).