We're up to the Minnesota Vikings in our second annual Canal Street Chronicles mock draft so you know we must be nearing the end. Responsible for making thirtieth overall pick is CSC member WhoDat_OH. Make the jump to see who was selected.

Thanks so much to WhoDat_OH for his participation.

With the thirtieth pick in the 2010 CSC community mock draft, the Minnesota Vikings select...

For a team that made it to their conference championship game, the Minnesota Vikings have some glaring needs. Father Time has caught up with a few key players, beside the obvious "will he/won't he" situation that coach "Chilly" has put them in with their AARP quarterback. Defensive tackle Pat Williams will turn 38 during this season. He said in January that he's 50/50 on whether to retire. So for guidance, he turned to Brett Favre for advice. I s#%@ you not! And let's not forget about the Starcaps case still hanging out there like your mother's panties on the clothes line.

The weak play of the center/right guard versus a 3-4 defense was exposed in their losses. Most notably against the Pittsburgh Steelers. Center John Sullivan is smart and makes the calls, but he struggles with physicality versus 3-4 defenses. Right guard Anthony Herrera is a somewhat up-and-down player; a guy that has strength and toughness and could play center or guard would be welcome.

The injuries to starting cornerbacks Antoine Winfield and Cedrick Griffin forced a shuffle to secondary that their depth chart could woefully afford. They currently have three cornerbacks on the active roster, including the aging Winfield and Griffin who is coming off major ACL surgery. 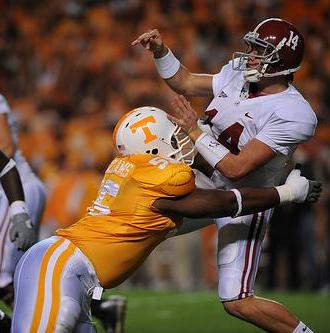 With the first-round worthy cornerbacks and interior offensive linemen already taken, University of Tennessee defensive tackle Dan Williams seems the perfect choice. They need to find an heir apparent to replace aging Pat Williams. This defense asks its DTs to eat up blockers and take on double-teams, which frees up the DEs and LBs to fly to the ball and make plays. An inside pass rush is a bonus, but the Vikes need a big body inside who can team with Kevin Williams.

Lastly, the Viking fans racked their brains half of last season to come up with a nickname for the defensive line. Their collective infinite wisdom decided upon "Shock and AWWE" with AWWE standing for Allen-Williams-Williams-Edwards. Selecting Dan Williams to supplant Pat Williams will save them from having to come with another brain-fart and printing new shirts. Of course that still goes out the window if they lose restricted free agent Ray Edwards. But that's different matter for another day.