One final pick in our second annual community mock draft here at Canal Street Chronicles before the Saints are finally on the clock. Of course, the Indianapolis Colts hold that thirty-first overall selection and in charge of representing the Super Bowl losers is CSC member Fleur de Leap. Check out his decision after the jump.

Props to Fleur de Leap for his participation.

With the thirty-first selection in the 2010 CSC community mock draft, the Indianapolis Colts select...

The 2009 Indianapolis Colts made it to the Superbowl and were viewed by most as the best team in the NFL. Their hopes of regaining the Lombardi Trophy were bamboozled by a far superior team in the New Orleans Saints (had to give a shout out). Indianapolis was ranked 32nd overall in rushing offense and offensive line could be an area to target. However, in 2009 the Colts transitioned to the Tampa-2 defensive scheme, which can actually stop the run, but they finished 24th in rushing defense in the NFL.

Indy will have a tough decision to make when trying to decide between offensive tackle Anthony Davis and defensive tackle Brian Price. Davis is ranked higher on the Colts' "Big Board" and can help with Indy's 32nd ranked rushing offense, but has character concerns. Indianapolis will also consider Brian Price to help improve their rushing defense - that got torched for most of the 2009 season - which could have been statistically worse if their opponents would not have been playing catch-up during 14 of 16 games.

With the thirty-first selection in the 2010 NFL Draft, the Indianapolis Colts select defensive tackle Brian Price. 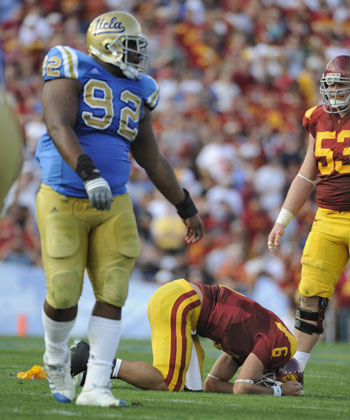 This powerhouse earned Pacific-10 defensive player of the year honors in 2009 with seven sacks & 48 tackles (23½ for a loss; ranked 4th in entire NCAA). He uses great explosion and short-area quickness to get an edge. On film he dominates the line of scrimmage by using his raw strength and quickness to penetrate through blocking schemes. Once in the backfield he wreaks havoc, punishing ball-carriers and passers alike.

Price reminds some scouts of Warren Sapp. He is a stump who is hard to move, keeping his pads low, using leverage and never stopping moving his feet, fighting his way to the ball. He can beat a blocker with a number of different moves or by simply throwing the guy out of the way. He also makes good reads with the ability to sniff out screens before they develop.

His toughness probably reflects his background; he grew up in South Central Los Angeles, attended Crenshaw High School and dealt with two of his brothers being killed. Price (6'2") does not have the height of some of the other tackle prospects, such as Suh (6'4") or Oklahoma's Gerald McCoy (6'4"). But many tackles of his stature have been very productive in the NFL. Some of the qualities that he does possess, which make him a player that other players want on their side, are simply immeasurable. He is a work in progress and does have size and speed limitations. Another drawback is that Price tends to struggle against bigger, more powerful offensive linemen.

Snatching up Price at this point in the draft is, well...Priceless. The Indianapolis Colts are going to realize how great this addition will be to the team in years to come...and quite possibly in the 2010 season.