We have finally reached the end of this years second annual Canal Street Chronicles community mock draft. As winners of the Super Bowl and supreme masters of the universe, the New Orleans Saints hold the thirty-second overall pick and final one of the first round. Here to close out the show is CSC leader, Saintsational. Make the jump to find out who he's selected for the black and gold.

I would like to thank Saintsational for my participation.

With the thirty-second pick in the 2010 CSC community mock draft, the New Orleans Saints select...

You're probably asking yourself, "Why did Dave choose Everson Griffen for the Saints when Carlos Dunlap is still available and Dunlap was the player he chose for Mocking the Draft's mock draft?"

Because I'm covering my butt. Truth is, I have no flippin' clue who the Saints will choose with their first pick of the draft. So if I select a different player for every mock draft in which I participate, I've got a greater chance of picking the Saints eventual selection at least once. Then when it happens I can say, "Hey, I knew the Saints would select [Player Name]! I said so in my [Specific Mock Draft] write-up!" Genius, I know. 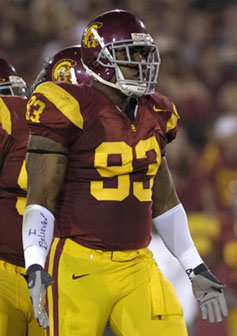 Truth is, I've never been comfortable choosing players in mock drafts. I don't follow college football and even if I did, still wouldn't know enough about any of these prospects to accurately assess their talent. I'm forced to rely on the information of others from around the internet who claim to know what they're talking about but I consistently find discrepancies. Take the conflicting reports from Draft Countdown and Mocking the Draft, respectively, regarding Griffen's ability against the run:

Not a great run defender

Strong presence against the run.

Well, which is it? I don't know. What's even worse is that I can't even get a straight answer between NFL Draft Dog and Draft Countdown about something as simple and objective as the length of his arms:

He has very powerful long arms

Anyway, most of what I've read matches up and I think after digesting this post, you'll have a good representation of at least the Platonic Form of Everson Griffen.

Seriously though, Everson Griffen could be a solid pick here. Emphasis on the could. Like Carlos Dunlap, Griffen is the classic high risk/high reward, boom/bust prospect. With a lot of talent and athleticism to match his impressive size, he's got what it takes to be a dangerous pass rusher in the NFL. But it will take some good coaching to smooth out some of Griffen's rough edges and get him to reach his full potential.

Once considered a top ten prospect by many, Everson's stock has dropped significantly due to questions concerning his discipline, work ethic and behavior. A large red flag on many a scouts radar is probably Griffen's arrest last Fourth of July. While at a party in a Nantucket, Rhode Island beach house - apparently the former home of an arsonist and now available for rent this Fourth of July for just $6,000 - Griffen and another USC player were booked on charges of breach of the peace.

According to a police report about the incident, officers received numerous noise complaints from neighbors in the area and as they approached the home to respond, they could "clearly hear loud music, screaming, yelling and chanting of 'USA, USA'."

Griffen was observed by police yelling "Get in the house. The cops are here,"and "Everyone in!" according to the report. Police estimated the crowd to be several hundred people.

What's so wrong about a couple of kids just showing their patriotism? 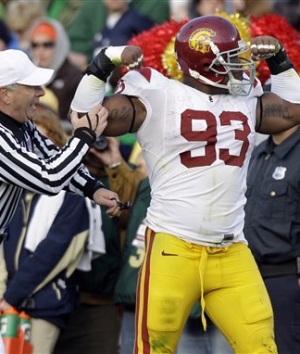 His stock may be back on the rise, however, after his very impressive performance at USC's pro day in late March, stealing the show from other top prospects Taylor Mays and Stafon Johnson. Assuming the Saints don't make a move to address their need at defensive end during free agency, like signing Alex Brown, Everson Griffen seems a very likely candidate for the Saints with the thirty-second overall selection. Especially considering more Saints first round picks have come from USC than any other school in their draft history.

Here are what the experts at Draft Countdown had to say about Griffen:

Strengths:
Adequate height --- Terrific bulk --- Very athletic and explosive --- Great speed with a burst --- Excellent strength --- Violent hand use --- Shows a varied repertoire of pass rush moves --- Can bend off the edge --- Big hitter and a reliable tackler --- Does a nice job in pursuit and closes in a hurry --- Great range and comfortable in space --- Considerable upside.

Weaknesses:
Short arms --- Inconsistent with a poor motor --- Questionable instincts and awareness --- Undisciplined when it comes to assignments --- Not a great run defender --- Doesn't play up to weight room numbers --- Is not real tough or competitive --- Mediocre production --- Underachiever.

Notes:
Just a one-year starter for the Trojans --- Earned 2nd Team All-Pac-10 honors in 2009 --- Cousin Keegan Herring played at Arizona St. --- Was considered to be one of the elite recruits in the entire country, regardless of position, coming out of high school --- Saw action as a backup in 2007 then began the 2008 season as a starter before losing the job to Clay Matthews --- Finally began to emerge in 2009 and enjoyed a breakdown junior campaign --- Also saw some action in a hybrid linebacker role in college but will most likely play with his hand on the ground at the next level --- Looks like a Top 10 pick on paper but doesn't always play up to his talent level --- Has the physical tools to be an outstanding pro but shaky intangibles could prevent him from ever maximizing his potential --- Classic Boom or Bust type of prospect.

And here is Mocking the Draft's take:

Final Word: Griffen is another Trojan that never reached his full potential that many thought was there when he entered the college game. With that said, Griffin had his best year in 2009 and he may be blooming at the right time. He is the perfect fit for a team searching for a left defensive end that can play the run but surprise with his ability to get to the passer from any angle. Defensive Coordinators that like to get creative will like Griffen the most. He has been involved in a couple of off the field skirmishes but no charges have been filed. He appears to have dedicated himself to the game after a couple of years of trying to let his talent get him by. He could end up in the first round if he works out well but production wise, he is a second round caliber defensive end.