Okay, the good-natured back and forth between Darren Sharper and Visanthe Shiancoe last week was fun and provided quite a few laughs during this incredibly slow period of NFL news but "Stankoe" - as Sharper likes to call him - might have taken it a bit too far this time.

Last night, Visanthe took to Twitter yet again. This time, with pictures!

TRUE STORY! Before target practice a soldier suggested a custom target for me. Guess he wanted to start my engine early for the SAINTS game!..."X- marks the spot".. Loved the idea, ehhh so I went for it 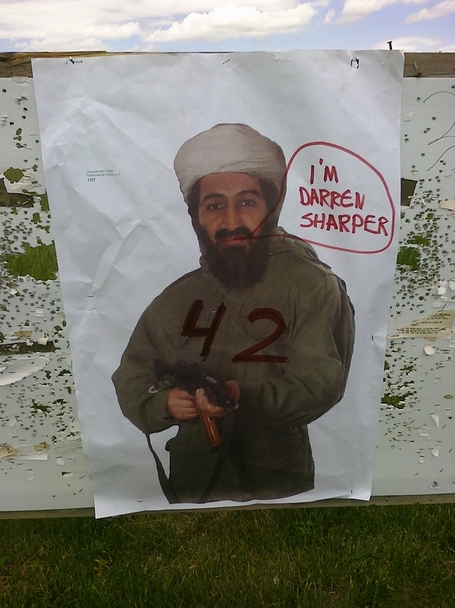 And here is what Osharper Bin Laden looked like when Shiancoe was finished. 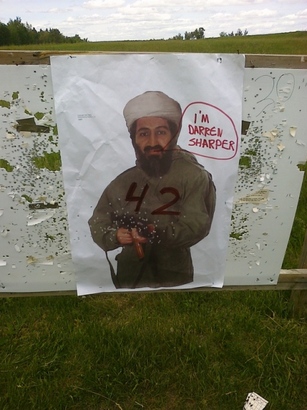 What happened? Was the Hitler target already being used for Bobby McCray? It's obvious that some of the military guys Shiancoe was with set this up for him so I will ignore any possible insinuations that he would like to actually shoot D. Sharp, but did he really have to support the idea and share it with the world? I'm sorry, Vikings fans, but you cannot call Saints players classless and/or cheap shot artists when one of your own is pulling this.

Maybe it's time this ends now. I would hate for Sharper to follow this up with something really stupid. Or brings his friend Jeremy into this.

Update: Too late! Sharper has already fired back...

ok homeboy you done went too far, making me out to be something that has brought this country alot of heartache...Imma bust you right under your chinstrap from the first play on. I don't care about the fine. F the money Imma do it for the red,white&blue...And you'll see me cuz I'll be dressed in black & gold. Protect your neck that's all the warning you get.