Well, Satch and Andrew have set the bar pretty high so far in Dave's absence (nice work, fellas).  I will do my best to keep the quality and quantity right up there with the Best of the Best.

No practices scheduled for this morning, so until the wrap-ups from the afternoon session appear, you'll have to snack on these tasty tidbits of Saints-related stories and information.

Grab another beverage and/or piece of toast, follow the jump, then sit back and enjoy! 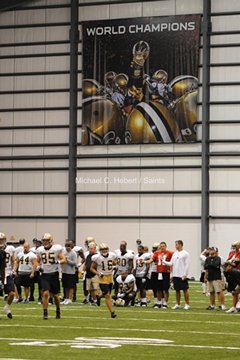 This image was on the Saints team site, and I thought it'd be sweet for us to see our boys practicing under this reminder of what was accomplished last season.  And it's not dwelling on the past as the large poster is BEHIND the team as they practice and move forward into the "all new and start again" 2010 and beyond.

In case you're wondering...

Leftover reports from the first two days of camp:

New Orleans Saints camp confidential: Spotlight on the running backs | NOLA.com
Who's hot, play, and quote of the day from Saturday.

Gregg Williams changes defensive culture of New Orleans Saints | NOLA.com
Pete Finney gives us a bit of deja vu all over again...(culture change...really? I think I've heard this one before).

New Orleans Saints get show of hands from receivers | NOLA.com
Others step up while Marques Colston, Robert Meachem are sidelined. - Robert Stewart of the T-P.

Behind The Facemask With Scott Shanle-  Q&A from neworleansaints.com

Black and Golden Oldies: New Orleans Saints trivia and tidbits
From neworleans.com.  This weekly feature began earlier this week before camp started, but I thought it might be fun to offer it up for those trivia-history buffs.

NFL Network Sunday Afternoon Specials
Wondering what to watch this afternoon?  NFL Network is airing the NFCCG, followed by SB 44, followed by the Sound FX shows from Conference Championship Weekend and the Super Bowl.  If you have never seen Sound FX, it is an awesome show that rolls game highlights with audio from mic'ed up players and coaches and local team broadcast crews.  I have all of these shows saved on my DVR.  This link takes you to their schedule page, which stays current to real time.

Contract status of '10 first-round draft picks - NFL Nation Blog - ESPN
Just an FYI for those wondering about the remaining 1st round draft pick signings.  From espn.com.

-- Anyone else love that picture of Benson?