Share All sharing options for: Cha Ching! - Rickey Jackson and the Saints finally enter the Pro Football Hall of Fame 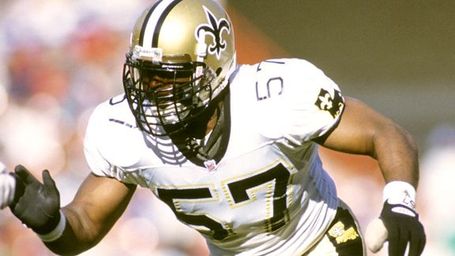 What a year it's been! We finally made it to a Super Bowl and then shocked the world by actually winning it in dramatic fashion. As if that wasn't enough, today we also get to see one of the greatest ever to wear the black and gold inducted into the Hall of Fame. Tonight, Rickey Jackson will have his bronze bust immortalized in Canton, Ohio along with Jerry Rice, Emmit Smith, Russ Grimm, Dick LeBeau, Floyd Little, and John Randle. This is a list of true NFL greats, but for us Saints fans, the day belongs to Mr. Jackson. He becomes the first long-time Saint to receive this honor. Let's start this little tribute with some video:

Along with Sam Mills, Pat Swilling, and Vaughan Johnson, Rickey was part of one of the most formidable defensive units in league history - the Dome Patrol. I never had the opportunity to see these guys play in person, but I watched them many times on the TV and remember them being the heart and soul of the Jim Mora-era Saints. From 1986-1992, these guys rained torment and pain on any opposing offense that dared enter the Superdome.

Rickey was a key component in this quartet of bad-asses. Here's his HOF bio:

One of the key players that fueled the New Orleans Saints transition from perennial losers into contenders in the late 1980s was linebacker Rickey Jackson. The club drafted Jackson out of Pittsburgh in the second round of the 1981 NFL Draft.

He made an immediate impact as a rookie when he led the team with a franchise rookie record eight sacks and was also the Saints’ leading tackler. He had another productive year during the strike-shortened 1982 season.

In 1983 he established himself as an elite pass rusher in the NFL when he recorded 12 sacks. That year marked the first of six double-digit sack totals in his career. It also earned Jackson a trip to the Pro Bowl for the first time. In all, he was named to the Pro Bowl six times including his final year in New Orleans in 1993.

He was named first-team All-Pro in 1986, 1987, 1992, and 1993. As Jackson raised his play to a new level, the team also began enjoying a new string of success. The Saints registered its first winning season and the first playoff appearance in franchise history after they finished 12-3 in 1987. Leading the way was Jackson who recorded 9.5 sacks, 74 tackles, three forces fumbles, and two interceptions. More winning followed when the Saints captured their first-ever division title in 1991. Jackson helped the cause with 11.5 sacks, 59 tackles, three forced fumbles, three fumble recoveries, and three passes defensed. New Orleans never finished below .500 during Jackson’s final seven years with the team.

After 13 seasons with the Saints, Jackson finished his NFL career with two final seasons with the San Francisco 49ers who converted him to defensive end and turned him into a pass rush specialist. In his first year in the Bay area, Jackson enjoyed a championship run with his new team capped by a victory over the San Diego Chargers in Super Bowl XXIX. He started at right defensive end for the 49ers in that game and chipped in with two tackles.

Jackson retired after the 1995 season with 128 career sacks that does not include his rookie total since the sack did not become an official statistic until 1982. He also intercepted eight passes during his 227-game NFL career.

I now turn this over to writers better than myself. If you haven't seen them yet, I strongly recommend you read Ken Trahan's four-part series on our man of the hour. They're a very informative look into the life of Rickey Jackson.

Rickey Jackson to Canton, Part One: The Formative Years

Here's more links to some of the many other tribute posts of the last few days:

Pahokee's Rickey Jackson is going to the Pro Football Hall of Fame, but his heart never really leaves

For Saints, Jackson, wait for HOF finally over

Here's where you guys come in. I now open my feeble attempt at a tribute post up to you. For the many other CSC members who remember those days more clearly than I do (I was a teenager focused mostly on girls, girls, girls at the time), please share your thoughts and memories of no. 57 either below in the comment section or as a new Fanpost. It's not every day we see a Saint inducted into the Hall of Fame, so let's congratulate Rickey on this honor and thank him for the many years he played so well for us.

The HOF Induction Ceremony will be broadcast tonight starting at 6:00 CST on NFL Network.