I don't know about you but I just can't seem to shake visions of Marshawn Lynch darting through the Saints defense like swiss cheese. Put simply, the play is haunting me.

But I believe in facing your fears. So, as much as it might sting, we're going to analyze the play that dashed the Saints hopes of further playoff dreams before the image of Lynch grabbing his crotch mid-air is permanently burned into the back of our eyelids. Plus, I was supposed to write the last of these Vick sponsored posts last week and since this play makes me literally want to vomit, I figure it more than qualifies as the "sickest" play.

You're probably wondering why I've decided to call this play the Chicken Little Flea Flicker. That's simple. I've named it after a play called in one of the most epic football battles ever witnessed on the gridiron, when Danny O'Shea's rag-tag band of misfits, the Little Giants, miraculously defeated snobby ex-football star Kevin O'Shea's Cowboys 27-21 in Urbania, Ohio to determine who would be the towns one and only peewee football team.

They say art imitates life and watching the all too real Saints defense flipping and flopping about the field in their desperate attempt to take down Marshawn Lynch reminded me so much of the peewee Cowboys trying to tackle little "Johnnie" as he runs through a fart screen set by offensive lineman Rudy "Gasman" Zoleteck and toward the end zone, where his oft-absent father awaits with open arms.

In case you've never had the honor to watch this cinematic masterpiece, you can watch the game-changing play below. Be sure to catch the end of the run; the similarities are uncanny! Then make the jump for a quick breakdown of he real play. If you can stomach it. 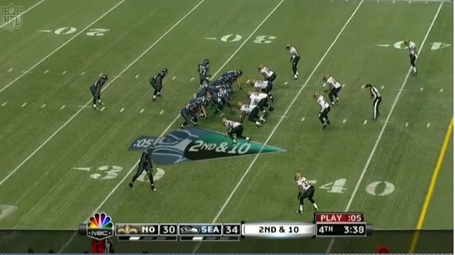 The Seahawks look ready to run the ball and the Saints look prepared to defend said rush. The element of surprise was non-existent and has absolutely nothing to do with why this play went oh so wrong. 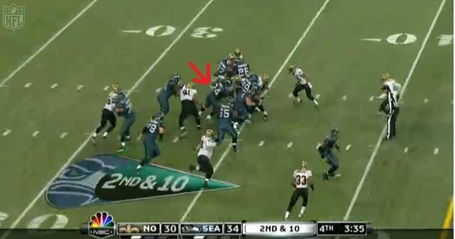 Marshawn Lynch runs it right up the middle and meets immediate resistance at the line. Initially it looks like the play will end with little or no gain for the Seahawks as Scott Shanle goes in for the tackle. He misses. 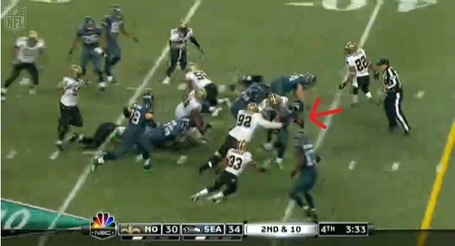 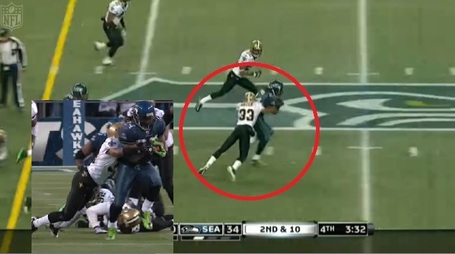 It's Jabari Greer's turn and this is probably the most egregious tackling mistake of the play. Greer makes an obvious attempt to knock the ball lose, which is fine. But he's also got both arms wrapped around Lynch in the process so at the very least, even in the failure of forcing a fumble, he should be able to bring Lynch down to the ground and put an end to this catastrophe. 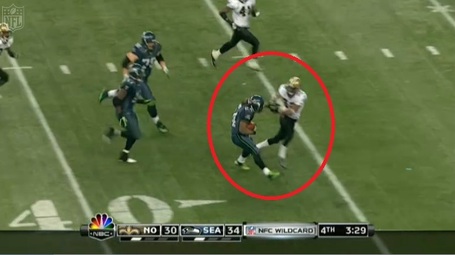 Have no fear because Tracy Porter is on the scene and he's decided to concentrate more of knocking the ball loose than on tacking Marshawn. Upon his arrival, however, Lynch decides to pull up and change direction while extending his forearm... 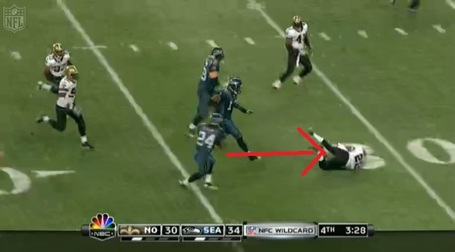 ...thrusting Porter flat on his face like a rag doll. 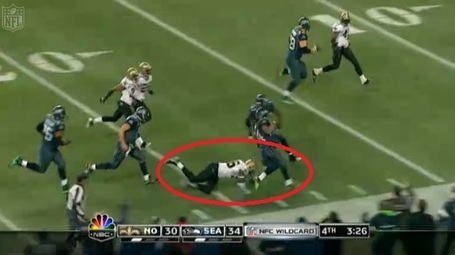 Alex Brown has pursued the play all the way down field and now has a shot to take down Marshawn. Before it's too late, Brown dives to make the shoe-string tackle but comes up with a whole lot of nothing. 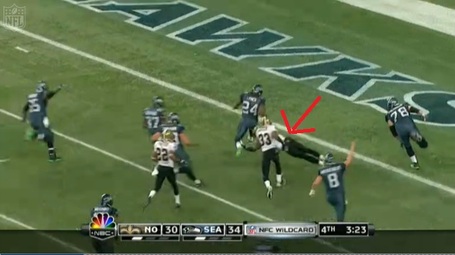 Seeing how well the ankle-biting technique used by Alex Brown worked three seconds ago, Harper gives it one last effort just before the goal line. Lynch shakes him off and hops along.