Time again to reflect on the season that was 2010 and hand out another prestigious Chronicle Award. This time around, we're trying to find out which offensive play was your most favorite.

After the jump you'll find the six plays I've nominated for this award and a brief description of each to help refresh your memory. All you need to do is cast your vote for your favorite. You may base your decision on how important the play was in relation to that game or even the season. You can base it purely on how much talent it took. Or just on sheer awesomeness. Doesn't matter. Just pick one and vote. The poll will be open for 72 hours.

Lance Moore was the beneficiary of good fortune, heads-up play and pure skill when a pass intended for Marques Colston tipped off the hands Raven defender and landed in Lance's hands. A full, in-depth analysis of this play can be found here, when it was chosen as one of our "Sickest Plays". ...Watch it now

Instead of kicking a field goal and tying the game up with :34 seconds remaining, Drew Brees and the Saints try the rarely-effective hard count on 4th and 2 deep in the red zone. Unbelievably, the Bengals are stupid enough to fall for it, the Saints are awarded a first down and a Marques Colston touchdown on the following play gives the Saints the lead and the win...Watch it now

The game against the Ravens saw not just one amazing catch, but two. Before Lance Moore's endzone juggling act came rookie tight end Jimmy Graham's backwards, one-handed catch and turn for the Saints first touchdown of the game...Watch it now 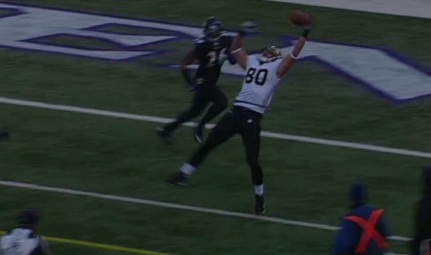 With the score tied 7-7 early in the first quarter of the Saints first showdown with the Atlanta Falcons, Lance Moore goes vertical as Brees finds the soft spot in the zone and hits him in stride. No defenders are even close to Moore, who is off to the races for an 80-yard touchdown and a Saints lead...Watch it now

I had to include at least one running play on this list and Chris Ivory's 55-yard run for score against the Bengals is probably the best one the Saints had all year. Bouncing inside and finding a hole, Ivory burst through the Bengals defense, was into open space all by himself and in the endzone just seconds later...Watch it now

We don't have many Reggie highlights from this season so this one might qualify as his best of the year. In the Saints early-season matchup against against the 49ers, Bush caught a short pass on the run, made a quick juke on linebacker Patrick Willis and walked into the end zone. Is this your jock strap, Mr. Willis?...Watch it here