The largest global manufacturer and marketer of padlocks and security products, Master Lock, announced late yesterday that they would become the official sponsor of the NFL Lockout if and probably when it begins in early March.

Company CEO John Heppner was excited while announcing the move, "The NFL has a huge following and we anticipate the media frenzy to be enormous in the unfortunate event that a lockout occurs. Given the 'lockout' name and our company's name and product, we felt it was the perfect opportunity to keep the Master Lock name in front of millions of Americans for an extended period of time and significantly increase our exposure." 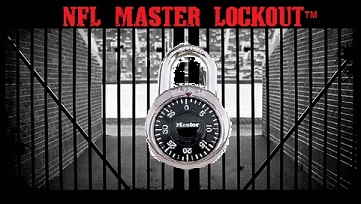 The company has agreed to financially support the players in the event of a lockout by matching money paid to their adversaries, the NFL owners, via TV contracts previously signed with broadcast networks. In essence, Master Lock will be taking away leverage from the NFL owners by narrowing the financial gap between the two parties, making it easier for the players to withstand a long work stoppage and giving them more reason to keep the lock out extended until their demands are met.

"Keep in mind, we're loaning this money. Like the contracts signed between team owners and the networks, the players will have to repay us in the long-term," explained Heppner.

Owners from around the league were understandably upset after learning of the partnership.

"These players are already making too much money. This move by Master Lock is unconscionable," said Jerry Richardson, the outspoken owner of the Carolina Panthers and co-chair of the NFL's Management Council Executive Committee.

Richardson added, "I look forward to seeing how John [Heppner] reacts when he sees all that money go toward fancy cars and strippers."

Part of the sponsorship also includes naming rights, meaning players will now be required to refer to the work stoppage as the 'Master Lockout™'

When asked whether he was worried about his company extending the lockout and possibly alienating NFL fans across the world, Heppner replied swiftly, "We feel we're doing the right thing. Hopefully the fans see it that way too. With no work, these players would be strapped for cash and would eventually risk injury when they're forced to play football somewhere else. Would you be happy if your favorite running back blew out his knee playing in a meaningless game for a team you don't care about and his rehab from that injury forced him to miss games for your favorite NFL team when the work stoppage actually comes to an end? I don't think you would and I don't think most NFL fans would be too happy either."

Heppner concluded, "Besides, the old saying goes: There's no such thing as bad publicity."

What effect this move may have on the competing UFL, a league hoping to flourish in the event of an NFL lockout, is not known. Rumors of their own sponsorship with Nyquil, however, have started to swirl.

**This is not a real story. Just another satirical gem. Master Lock has absolutely nothing to do with the NFL whatsoever.**