Our official Canal Street Chronicles fantasy football league has long been over and the last prediction contest ballot has closed. I figure it's about time I give everyone a final update and announce our winners.

First let's all congratulations CSC member Jay Preece, whose cleverly named fantasy football team, Henne Time, Henne Place, was crowned champion of our official Canal Street Chronicles CBS Sports fantasy football Commissioner league. Not many people gave Jay's team a chance when you were asked to choose an early favorite to win before the season started. Probably because Jay missed the draft and auto-picker stuck him with five - FIVE! - quarterbacks. But he didn't give up and made some nice roster moves, which makes his win even more impressive.

We also must congratulate long-time CSC member and internet bad boy, MtnExile, who was the only member to win more than one of our weekly prediction contests. He won two! I'll also give an honorable mention to members stujo4, coldpizza and dalleoman, who all tied for most appearances on a ballot with four each.

That means Jay and M-E will each be rewarded with either a black or white Saints polo shirt (their choice) when they email me to let me know their size, address and color choice.

A sincere thank you to everyone who participated in any of our contests/leagues this season.

After the jump you will find the final standings and the final playoff grid from our official fantasy football league to see how it all went down, as well as a list of weekly prediction contest winners. 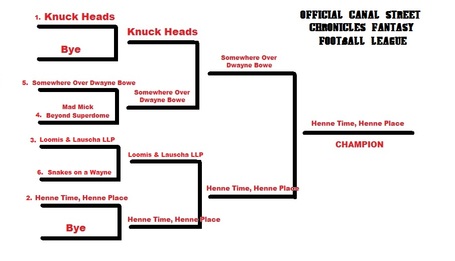