Popular opinion seems to be that Saints assistant secondary coach Tony Oden is the likely candidate to fill the vacant position as head coach of the secondary, created when Dennis Allen left to take the defensive coordinator position in Denver. That's what Jeff Duncan and Larry Holder think at least. Which makes sense given he's already a member of the coaching staff and familiar with the everything.

But since Sean Payton acknowledged yesterday that the team has 'plenty of time with filling his position,' we've got to assume it's not as simple as promoting Oden. They're most likely taking a look at other outside candidates. But who could they be considering?

Obviously, I have no freaking clue. But after some research, I've got an opinion on who I think they should be taking a look at. That would be recently fired Tennessee Titans defensive coordinator, Chuck Cecil.

Make the jump to find out who he is and why he might deserve consideration.

Does he have any playing background?

Chuck Cecil, originally from California, was a walk-on free safety at the University of Arizona where he earned All-American and Pac-10 Defensive Player of the Year honors his senior season. In 1988 he was drafted by the Green Bay Packers in the 4th round (89th overall), later playing for the Cardinals (1993) and Oilers (1995) until he retired following the 1995 season due to recurring concussions. Cecil, who earned a trip to the Pro Bowl in 1992, was known for his vicious hitting and hard-nosed play.

Following a stint as a television analyst for his collegiate alma mater, Cecil joined the coaching ranks in 2001 when he took a position as defensive assistant with the Titans under Jeff Fisher. Over the course of the next ten years he would work his way up the coaching ladder, first focusing strictly on safeties and nickel backs, then all defensive backs and finally getting promoted to defensive coordinator in 2009.

Why is he available?

Titans coach Jeff Fisher decided to fire Cecil on January 20th after signing a super secret contract extension during the 2010 season. , some think he was simply over-matched as a defensive coordinator. After his firing, one anonymous player said...

Ouch. The Titans finished the 2010 season with the 26th worst defense. Fans were obviously not happy with his job as defensive coordinator. Here is what Cecil said in his defense following his firing:

"The bottom line is when the season ended the way it did, it is going to reflect poorly on everybody," Cecil said. "Do I feel like the defense was to blame? I felt like the entire team was to blame. People are going to have different opinions about that, and everybody is entitled to their own opinion. I have my own and I'll take it with me.''

Why would the Saints want him?

First of all, he's got experience. Kind of a big deal in this league. Not only was he a Pro Bowl safety but he's been a defensive coach at nearly every level in the NFL, including secondary coach, which is the exact position the Saints are looking to fill.

Also important to note is where Cecil got that experience. Chuck comes from the same coaching tree as Saints defensive coordinator Gregg Williams. Though they were never in Tennessee at the same time, both worked their way up the coaching ranks under Jeff Fisher. Undoubtedly they share many of the same philosophies. That can be crucial.

But let's ignore his time as a defensive coordinator in Tennessee. There are many differences between position coach and coordinator so it doesn't make sense to grade his work at an unrelated position. Just as Gregg Williams wasn't cut out for head coaching in the NFL, I think it's safe to say Cecil is better off simply as a position coach. Instead we should focus more on his performance while coaching the Titans secondary in 2007 and 2008, which was well spent. In those two years he was responsible for two top-10 passing defenses, especially impressive when he had to face Peyton Manning twice a year.

Just as he was when he played the game (Sports Illustrated once asked if he was too vicious for the NFL), Chuck Cecil is still just as fiery on the sidelines. You might remember him as the coach who gave a referee the finger after being upset with a call in a Week Four game against the Broncos this season. I'm thinking he wouldn't have a problem working under a coordinator with his own fiery sideline maneuvers... 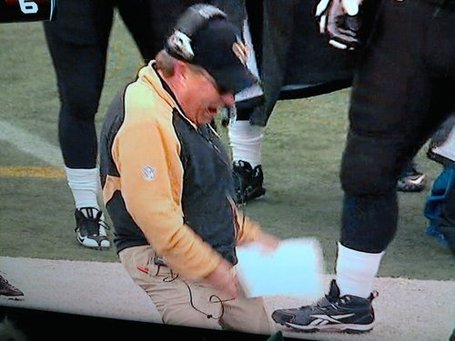 Of course I'm doing nothing but opining an educated guess. I have no idea what other underlying factors or past history could be at play, but on paper it really seems Chuck Cecil and the New Orleans Saints defense would be a great match and a serious possibility. I would expect the Saints to begin interviewing candidates for the position shortly and I wouldn't be surprised if Chuck Cecil is one of them.