Yesterday’s column (and my various podcasts) spurred a lot of questions and good discussion from readers. I thought it’d be interesting to give a couple of folks who disagree with me a chance to make a few points, and then I’d try to respond. Click through the jump for the Wild Card Reader Comment Spectacular!

Listened to your latest NFC South Report, good stuff. But as usual, you send me into an uncontrollable rage due to your pessimism.

The NFC is still up in the air. Yes there are some good teams but all have gaping holes. I will lay them out by seed.

1 Seed: Atlanta - All around solid team but vulnerable in the secondary, and once the running game is shut down, "Matty Ice" is good but not great enough to carry the offense. Oh yeah, did I mention the Saints beat them on MNF in the Georgia Dome?

2 Seed: Chicago - Very stout defense but also vulnerable in the secondary. And their offense is led by the great Jay Cutler. You shut down their offense, get of few picks from Jay, Saints can beat them. You don't need to run against them to win since they are so stout up front. Green Bay put up a whopping 60 yards rushing against them, and won. Saints can beat them. This game would be similar to how we handled the Steelers, who have a much better defense.

3 Seed: Philly - Probably the only team that scares me somewhat. But they are a young team, and teams have shown how to slow down Vick. Blitz him and hit him over and over. Their defense is probably the worst of the NFC Playoff teams besides the Seahawks. They've given up the most TD passes in the league (33). You know who has given up the fewest? Saints (13). And they have the worst redzone defense in the league (Saints have one of the best). Gregg Williams and Sean Payton can handle Philly, IN PHILLY.

6 Seed: Green Bay - Very good passing attack but we are best at the defending the pass. They have no running game similar to us. And their offensive line is not very good and very mistake prone. Their defense is very good, but if the game plan is the right one, and you make the right adjustments, you can score on them. Sean Payton and Gregg Williams are the best at making in-game adjustments.  -Ryan, via email

And, along the same lines as Ryan, we have commenter Philinwood:

It’s just my opinion, but your analysis of the Saints being the 4th best team in the NFC is incorrect. First of all, look at the Eagles. They got destroyed by Minnesota led by Joe Webb. The Eagles have a terrible linebacker corps with a rookie that’s mediocre and inexperience at MLB because of injuries. Likewise, their secondary with is exploitable to be kind. They are awful. If they didn’t have three rookies in the secondary and 1-2 others who are inexperienced, they could be a contender.

I won’t comment on GB, they change every other week but they seem good. As far as Chicago is concerned, let’s just say that Jay Cutler has to beat Drew Brees for me to concede Chicago is better.

First of all, thanks so much for reading and listening. I love it when people disagree with me, especially when it’s done in a logical, polite manner.

I think that both Ryan and Philinwood do an excellent job of pointing out how the Saints can beat the rest of the teams in the NFC. The question is: will the Saints actually be able to do it? That’s where I’m not so sure, thanks to the way that the playoff field is stacking up.

Let’s look one more time at what the Saints would have to do to make the Super Bowl:

(1) Beat Seattle on the road (which I expect them to do).

(2) Either beat Green Bay (a team that I think is better than the Saints are) at home or Atlanta (a team that is roughly equal to the Saints) on the road.

(3) Beat either Chicago or Philly on the road. I think both of those teams are better than the Saints, especially because the games would be on the road.

Can the Saints do it? Of course. But in how many of those games would you really favor the Saints? I would only favor them against Seattle. I'd probably call a Saints-Green Bay game a toss-up because it'd be in the 'Dome. The Saints would rightfully be the underdog in the other games.

So, you're talking about a series of upsets. Let’s look at the numbers a little more closely:

Let’s say that the Saints play Seattle this week and are 75% likely to win (probably an overestimate). And let’s assume that they are underdogs in the next two rounds and are 40% likely to win each of those games.

If you are way more optimistic than I am and think the Saints are 80% likely to win at Seattle, 60% likely to win in the second round (because they’re playing Green Bay at home, for example), and 50% likely to win the NFC Championship on the road, that puts their Super Bowl odds at 24%, significantly higher, but still 3-1 against.

Now, you can play with the numbers all you want and make them say whatever you want them to say. However, using almost any set of reasonable assumptions shows that the Saints are going to have trouble advancing to the Super Bowl, and it will take an unlikely series of events to get there*.

*The nature of probability means that it's unlikely for any given team to make the Super Bowl. Look at the Patriots. Let's assume that they're so dominant that they're 75% likely to win their first game and 70% likely to win the conference championship. That means that they have a 52.5% chance of making the Super Bowl...basically a coin flip. The NFL is a tough league. The point is, though, that the Patriot's 50-50 chance is higher than any other team's chance, and the Saints' odds are probably on the lower end of the NFC teams.

As far as where the Saints rank in the NFC, it's hard to tell. I haven't seen that many games by the other teams, so I'll turn to my 4 go-to power rankings sites* (Pro Football Reference, Advanced NFL Stats, Football Outsiders, and Jeff Sagarin at USA Today). Of course, these rankings aren't perfect, because football is a tough sport to analyze statistically. However, these sites are certainly better than going by any of the power rankings I've seen at SI.com, ESPN.com, etc.

*I recognize there are some readers who don't believe that any of those sites are worth reading. That's fine. I disagree, and there is plenty of evidence to show that the advanced statistical sites do a better job of explaining what's happening and predicting what will happen than most other available analyses, but I have no desire to re-hash that argument. Watching the games, scouting, etc. is still important. No one (including the writers at those sites) thinks otherwise.

*Man, did Advanced NFL Statistics hate the NFC South this year or what? If you think those rankings are a little fluky and remove them, Atlanta moves up to #2, Philly down to #3, and the Saints end up tied for 4th with Chicago.

According to those rankings, most of the playoff teams seem to be better than the Saints. Subjectively, I've seen enough of the Falcons-Saints to say that the Saints and Falcons seem to be pretty close. I haven't seen enough of the other teams to make an honest judgment: when you just see a game or two, and a bunch of highlights, you don't know how good a team truly is. So I'll trust the rankings but recognize that they aren't perfect. Maybe they're all overrating certain teams and underrating the Saints. However, the rankings are probably better than my judgement through black-and-gold tinted (pint) glasses.

The playoff season is certainly not a lost cause. As Ryan and Philinwood have pointed out, each of the NFC teams has holes that can be exploited, and we have a coach, quarterback, and receiving corps that are good at exploiting holes. The way that upsets happen is through superior game planning and superior execution, and the Saints have excellent game planners and can execute well.

While this year’s Saints hasn't consistently played like an elite team, it's possible that the team we see in the playoffs will be a better, more consistent, and less turnover-prone version of the Saints. I see no reason to make that assumption, but it might happen. Maybe the Saints match up great against the other NFC playoff teams, maybe they'll play better, maybe they'll just get lucky and find a way to march on to the Super Bowl and earn the right to lose to New England*. Based on past performance, I wouldn't expect it to happen.

However, the long odds against the Saints are a good thing: it'll be that much sweeter when they do win.

Now, today’s game is almost on. I’ve got to dig all of my Saints-related good luck charms out of the garage and dust off a couple of bird-shaped voodoo dolls.

Game Day Beer: Because I'll either be celebrating or...not so much

Since it's a big Saints game, I had to return to Louisiana for the game day beer. Today's beer is Abita SOS, which stands for Save Our Shore, but might stand for something else (Same Old Saints? Sweet One, Sean?) after this game. SOS is a charity brew: $0.75 from each 22-ounce bottle goes to help restore the Gulf from the effects of the oil spill. Certainly a good cause.

SOS is a Weizen Pils, which is an unusual style that blends a pilsner with a bit of wheat beer. I've never had another Weizen Pils, and don't know that I necessarily will. 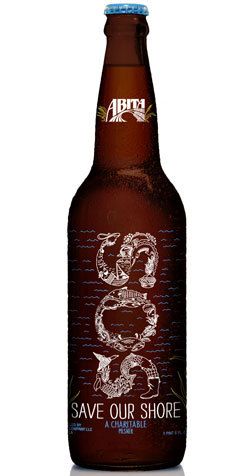 Let's not kid ourselves: Abita isn't a world-class brewery, and this isn't a world-class beer. However, SOS is quite nice: pours a clear gold with an off-white (eggshell?) head, a bready/citrusy (maybe grass) nose. The taste is good: a bit of biscuit, a bit of grass (not that kind), and just a little hoppy bitterness. The malts come through, too. The carbonation is about right, and the mouthfeel is medium (isn't it always!). SOS is highly drinkable, and certainly not offensive in any way. A nice choice when you don't want to focus on the beer, but don't want to drink crap, either. I've thrown a few bucks to restore the Gulf by buying this beer, and I hope that you'll do the same.

Now, it's time to kick back, enjoy the game, and cheer the boys to victory. See you next week.