Power Play of the Game: He Sits! He Scores!

Share All sharing options for: Power Play of the Game: He Sits! He Scores!

I didn't necessarily choose this week's Power Play of the Game because of anything amazing that happened on the field - let's face it, there weren't too many options - but more for what was happening on the sideline at the time.

I'm talking about Marques Colston's first quarter touchdown, brilliantly called by an injured Sean Payton from his seat on the bench. While the play itself was perfectly executed against an unsuspecting defense, it was more cool to see our head coach work his magic under duress while never missing a beat. It was also the only time the Saints would be in the lead the entire afternoon.

Make the jump to relive the high point of the Saints loss to the Buccaneers this past Sunday frame by frame.

Sean Payton needs help to the bench from Scottie Patton and the trainers. 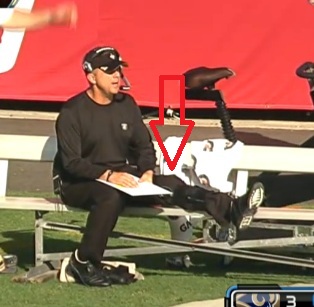 It's the left knee. He's got a brace on it. But that's not going to stop Payton from calling plays.

A few plays later, Colston is lined up on the far side.

Colston runs a hitch route. First he fakes to the outside. The defender falls for it hook, line and sinker.

But the out is just a fake. Colston quickly changes direction and starts running vertically again.

The defender's momentum has him moving forward while Colston is already past him and wide open.

Marques makes the easy, wide-open catch. It's simply a race to the end zone.

Will he make it in for the score of will the defender angle him out of bounds? 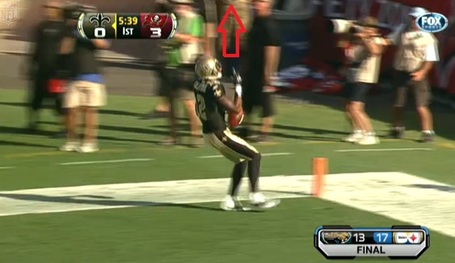 It's a touchdown! Colston gives props to the guy way up in the nosebleed section. 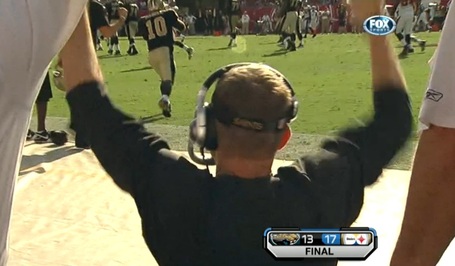 Payton rejoices from his sideline seat. He's still got it. Nobody puts Payton in a corner. 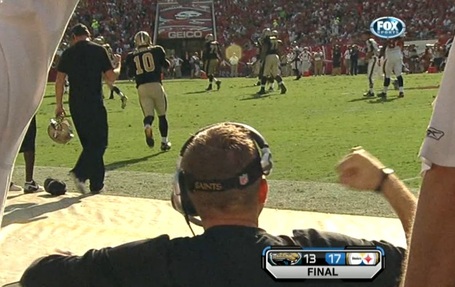 He finishes it off with a limited mobility fist pump.