Share All sharing options for: Power Play of the Game: Screen Pass Perfection

When a team puts up 62 points in a single game like the Saints did against the Colts this past Sunday night, you can bet your ass there are quite a few excellent plays worthy of consideration for an honor such as our Power Play of the Game here on CSC.

So I figured this would be a great opportunity to break down the play the Saints run better than any other team in the league thanks to their talented offensive line and the shifty Pierre Thomas: the screen pass. Not surprising, the 57-yard screen to Pierre on Sunday night also happened to be the Saints longest play of the game.

Make the jump for the full, moment-by-moment breakdown and see just how the Saints find so much success running this play. 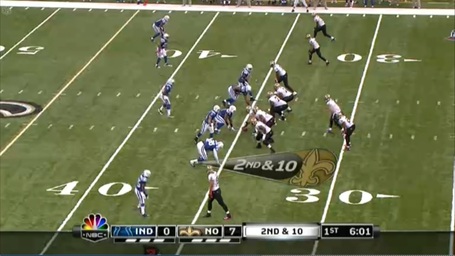 The Saints set up with three receivers on the right, Jimmy Graham on the left and Pierre Thomas in the backfield. Drew Brees is in the shotgun. 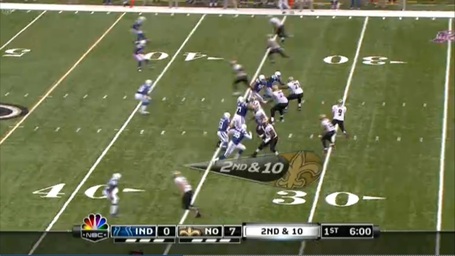 After the snap, the linemen engage their blocks in front of them. Pierre Thomas isn't getting the hand off and appears to be ready to block. 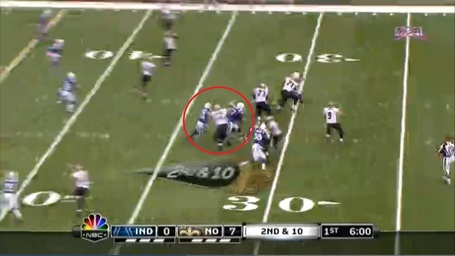 At this time, LG Carl Nicks and C Brian de la Puente disengage from their blocking assignments (circled) and start running to the left flat. Pierre Thomas also begins heading in that direction. 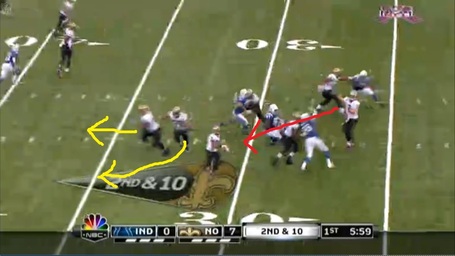 Pierre Thomas turns his head and prepares for the pass from Drew, who is facing pressure from the linemen that Nicks and de la Puente gave up on in favor of blocking downfield. Drew is expecting it, though, as the success of this play depends on sucking the defensive linemen toward him. 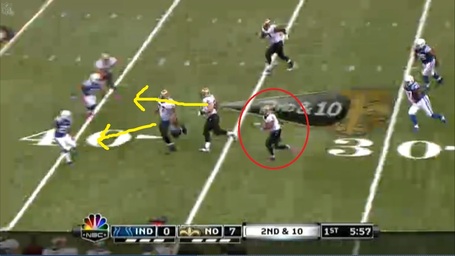 The play has developed perfectly and after making the catch, Pierre has a convoy of blockers (Nicks and de la Puente) in front of him and lots of green space. 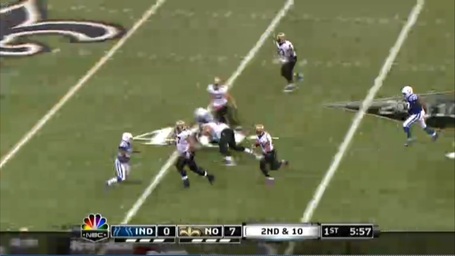 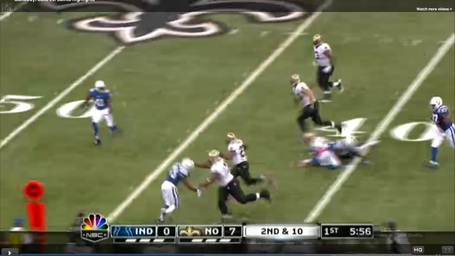 Thomas runs right between his blocks. He's got one-on-one isolation against a lone defensive back, Antoine Bethea. That's his man to beat. 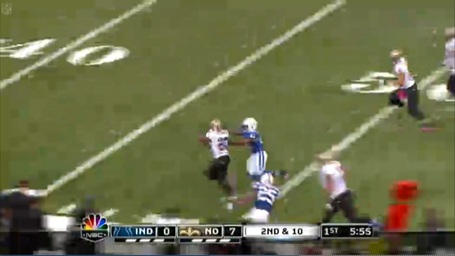 Initially he blows past him with a little juke and a lot of speed at the 50-yard line. Bethea helplessly grabs a handful of facemask. 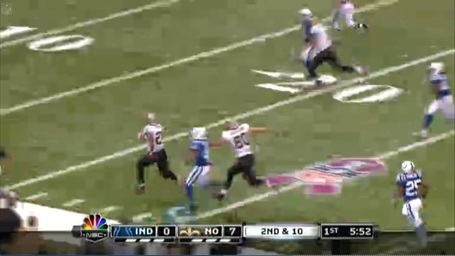 Thirty yards later that same defender has caught up with Thomas from behind. Jimmy Graham turns on his jets to try and help block. 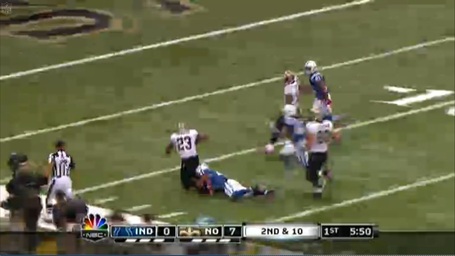 But it's not enough and Bethea takes Pierre Thomas down by the ankles at the 10-yard line, but not after 57 yards of damage have been done.