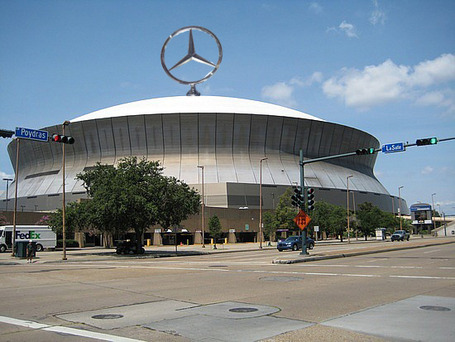 The Louisiana Supedome will now be called the Mercedes-Benz Superdome.

The New Orleans Saints and the famed automaker have reached a naming rights agreement for the domed stadium. You can get more details on the new deal, which will be announced tomorrow, from the Times-Pic but here are the essential details:

The New Orleans Saints and Mercedes-Benz have reached an agreement on a 10-year naming rights deal for the recently renovated Superdome that officially changes the name of the iconic stadium to the Mercedes-Benz Superdome. The deal marks the first time in the stadium's 36-year history that the building will be known by something other than the Louisiana Superdome.

Does this mean I'll finally get a cup holder on my plaza level seat?

Here's what the Saints owner had to say about the deal:

"The Saints were eager, in our new deal with the state, to undertake seeking the right company for naming rights for the Superdome," Saints owner Tom Benson said Monday. "We have found an iconic partner for an iconic building. Mercedes-Benz is a global company that can do business in any city anywhere in the world.

"They have chosen New Orleans. This is a great deal for the state of Louisiana, the city of New Orleans as well as for the Saints and Mercedes-Benz. They have been great to work with and proves why they are a global leader. This partnership also proves that our deal with the state works. We project that the state will no longer have any inducement obligations to the team and that is a benefit to everyone."

But before you get your panties in a wad about the name change, remember that this most likely won't change anything as far as the fans are concerned, who will still simply call it Da Dome.