Power Play of the Game: Stuffing the Birds

Share All sharing options for: Power Play of the Game: Stuffing the Birds

It may be hard to believe, but for the second week in a row a fourth down stand by the Saints defense has been selected as our weekly Power Play of the Game.

Well into overtime and with the ball in Saints territory, Falcons head coach Mike Smith decided to go for it on fourth and inches. With the game on the line, this one play would ultimately decide the winner. If the Falcons pick up the first down, they've got the chance to continue driving into field goal territory. If the Saints make the stop, the ball is theirs already in field goal territory.

Not only was this play game-changing, but considering it helped the Saints earn a crucial win against a division opponent, it may have also been season-changing. Make the jump to see how it all went down in overtime on Sunday. 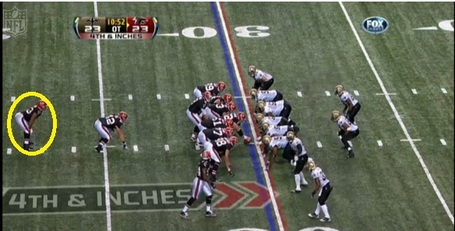 Here is the pre-snap look. Michael Turner is going to be getting the hand off. He's got Mike Cox lead blocking.  The Saints show a seven man front. 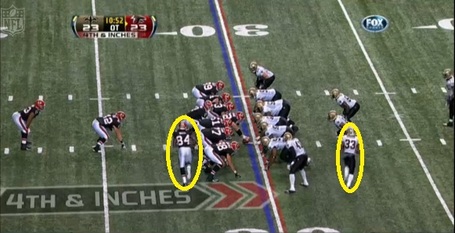 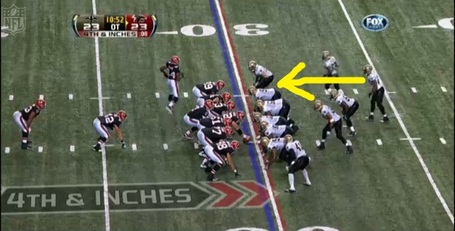 Meanwhile, Malcolm Jenkins is sneaking up to the line. The Saints will be bringing everyone on this play. Everyone attacks the line. 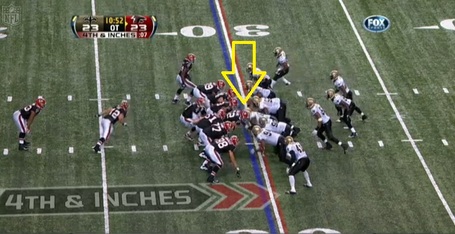 At the snap of the ball, a Saints defensive tackle (By process of elimination, I believe it's Aubrayo Franklin) gets an incredible jump on Falcons center Todd McClure, who doesn't even have time to brace himself. 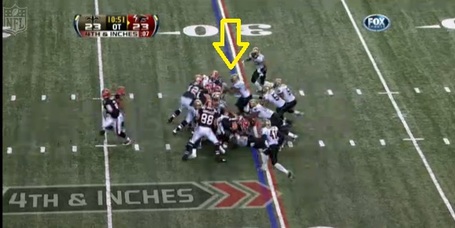 Shaun Rogers also gets a good, early push and the Falcons offensive line breaks down in the middle and on the left side. Malcolm Jenkins has room to run through the line and right at Turner. 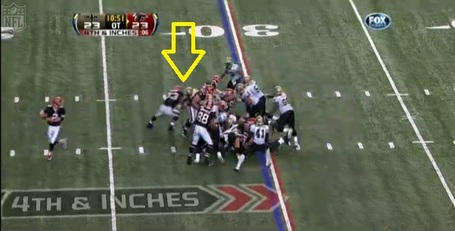 Jenkins is the first to make contact with Turner, slowing him down. 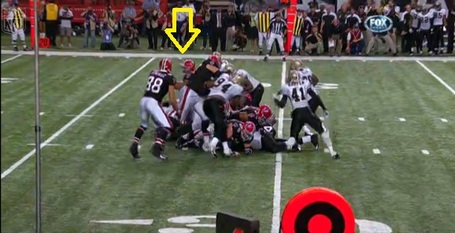 Malcolm Jenkins goes to the ground but keeps his arms wrapped around Michael Turner's legs, who has nowhere to run. He turns his back to the line.

The play ends in a big fusterclucking pile behind the line of scrimmage. Saints ball!