Power Play of the Game: Taking a Stand

Share All sharing options for: Power Play of the Game: Taking a Stand

On their second possession of the game this past Sunday, the Buccaneers faced fourth and one on the Saints 29-yard line. Instead of kicking a field goal and taking the three points for an early lead, Tampa decided to go for it.

But the Saints defense held their ground and stuffed the Bucs behind the line. Five plays later the Saints would score a touchdown and never relinquish the lead again. Their big stand was not only a game-changer but it was also a statement play that would set the tone for the rest of the game. The Saints would not be backing down on this day.

So how did it all happen? Make the jump for the breakdown. 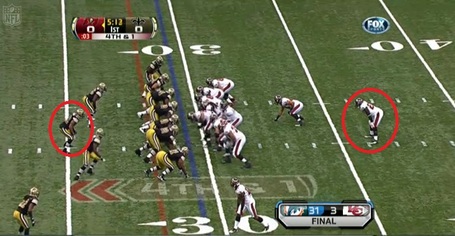 Here's the look pre-snap. This entire breakdown would be much better with a view from either end zone. The Saints have a seven man front. Jonathan Casillas and LeGarrette Blount are the two to watch on this play. 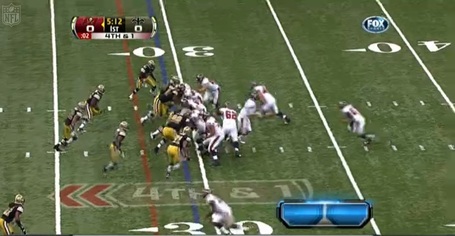 After the snap, the linemen for both teams assume their positions and engage their blocks. The handoff is going to be to Blount, who has fullback Erik Lorig lead blocking. Meanwhile, Buccaneers left guard Ted Larsen pulls over to the other side to block as well. 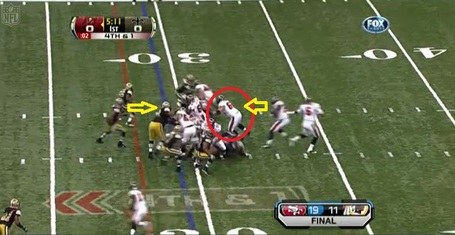 Blount takes the handoff. Roman Harper engages fullback Lorig on the outside. Blount's lead blocker is now the guard Larsen. A hole is developing on that right side. Casillas and Jo-Lonn Dunbar run in to fill it. 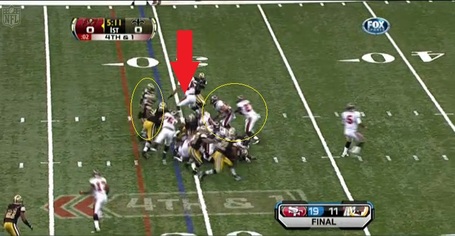 It's basically a two-on-two battle for the hole. 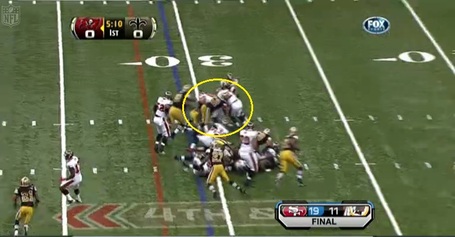 Dunbar engages Larsen with help from Roman Harper while Casillas takes the ball carrying Blount. They are stuffed behind the line of scrimmage. 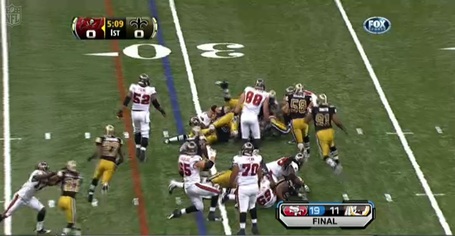 The Buccaneers are overpowered and Blount is taken down. At some point during this scrum the ball pops free. 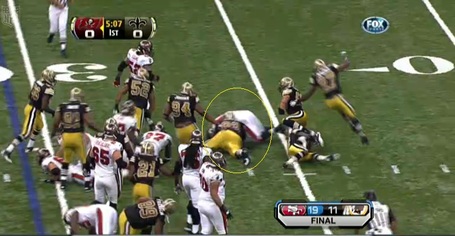 Shaun Rogers and Erik Lorig are on the ground battling for possession of the loose ball. Lorig eventually recovers.

But it doesn't matter because the Saints have made their big stand and will get the ball anyway. Gregg Williams is just a little happy.