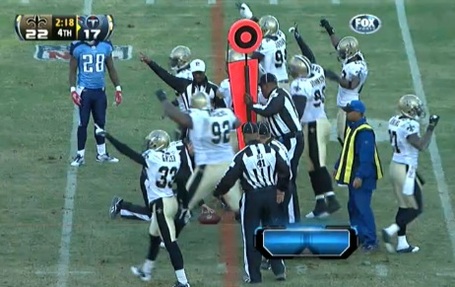 Down by just five points late in the fourth quarter, the Titans offense was on the move and quickly approaching the red zone. But the Saints defense stiffened, forcing the Titans into 4th and inches. When Jake Locker attempted to sneak over the line, the Saints came up with the big stuff and got the ball back.

On 2nd and goal with seconds remaining, the Titans had a chance to go for the win. Locker tossed a quick slant over the middle into the end zone. But Porter was on the receiver like white on rice, quickly batting the ball down. 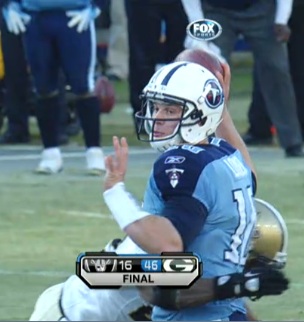 Was his arm moving forward? Was it a fumble? Regardless, Tracy Porter got a nice, clean shot on Jake Locker that knocked him out of the game for a play. 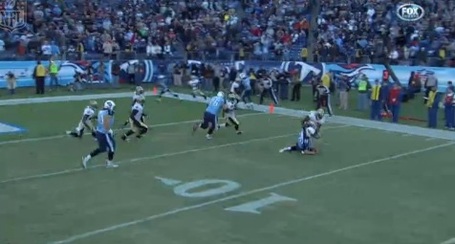 The Titans had one final shot to get into the end zone and pull off the upset. Linebacker Jo-Lonn Dunbar, however, was right on top of Jake Locker when he saw his receivers well covered and decided to scramble.

After taking the lead back with a touchdown pass to Marques Colston, Will Smith's 9-yard sack on the ensuing drive forced a Titans three and out. The Saints would score another touchdown on a Marques Colston catch and pull away for good on the next drive.