Early in the game on a key third down play, Robinson made a sweet sidestep to get out of the way of his blocker then went straight at Harvin and hit him right as he was about to catch the ball. The agility Robinson showed was impressive. 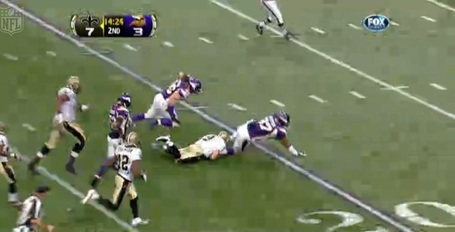 This one wasn't technically made by a defensive player but it was a defensive play. After the ball flew past him unexpectedly following a premature Brian de la Puente snap, Drew Brees reacted quickly and turned around to take down Griffen, who had recovered the fumble, and save an inevitable touchdown. The bad news: Brees is better at wrapping up ball carriers than half of the Saints defense.

With very little hope left in the early 4th quarter, the Vikings offense would take over following a Pierre Thomas touchdown. But all remaining hope would fade immediately with a drive killing Tom Johnson sack on the first play of the drive. Minnesota gave the ball right back to the Saints via punt two plays later, effectively ending the game. Chase Daniel checked in for the Saints on the subsequent drive.

This final play of the game wasn't important to the outcome whatsoever but it was the defenses only turnover of the day and it gives me another opportunity to highlight the play of Patrick Robinson, the team leader in interceptions.

After a Saints botched snap gave Minnesota the ball in their own territory for the second time, the Saints defense was again forced to make a stand. Adrian Peterson had nowhere to go on a second down run, losing six yards. Jeff Charleston followed that up with his first sack of the season. The Vikings were forced to settle for another field goal and the Saints had successfully minimized the damage.