After making a catch during a late-game comeback attempt, Julio Jones was stripped by Scott Shanle while trying to pick up more yardage after the catch. Malcolm Jenkins was all over the ball, picking it up in one smooth motion and running it 30 yards for the touchdown. Game over.

Defensive Play #2 - Down On All Fours

On two separate 4th and 1 plays in the 4th quarter, Mike Smith kept Matt Ryan and the offense on the field in last ditch attempts to win the game. Just like in their first meeting, the Falcons had nowhere to go on either play. 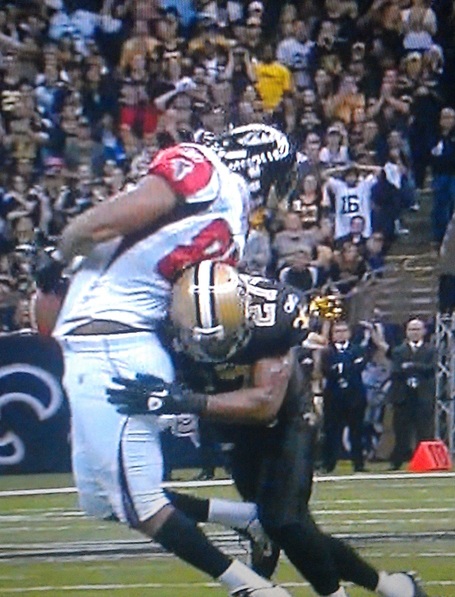 Not only was it a ferocious hit that got everyone on the defense pumped, but it stopped the Falcons on a key 3rd down play when the game was still close.

On the opening series of the game, Jabari Greer was a shut down machine in both pass defense and run support. First he took out Jacquizz Rodgers on an outside run. Then he made a well-timed pass breakup in front of Julio Jones. The Falcons would eventually settle for a field goal; his play and that series set a good tone for the night.

3-2-ATL 4 - (5:29) P.Thomas right guard for 4 yards, TOUCHDOWN. R5PENALTY on NO-P.Thomas, Unsportsmanlike Conduct, 15 yards, enforced between downs. After the play, Thomaspulled a bow out of his uniform and attached it to the football as a Christmas present 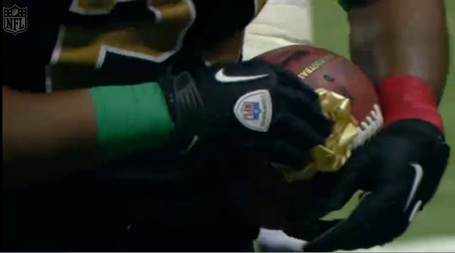 I'm really stretching the definition of defensive play with this one but I thought that damn bow did such a good job of "stopping" Pierre Thomas from "scoring" a nomination for best touchdown celebration of the year, I figured I'd roll with it. First, the paper protector on the sticky tab just wouldn't come off (the gloves probably don't help), as Pierre "fumbled" nervously and his teammates watched on patiently. Then the pesky bow wouldn't stick to the freakin' ball so Pierre was "forced to settle" with holding it down while handing it to a fan. Advantage: bow.