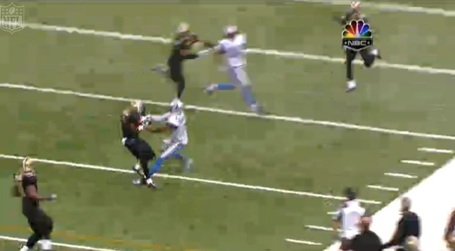 Tracy Porter's late-game interception, or should I say theft, was the only turnover in the game by either team. It would seal the deal for the Saints.

Can you believe it?! Linebacker Scott Shanle made our list! It's was his first sack in three years (vs. CAR 12/28/08) so it's the least we can do. Scott was supposed to be covering a tight end on the play. But when his man didn't run out to catch a pass, instead staying at the line to block, Shanle was free to make a run at Matt Stafford and made the most of his opportunity. 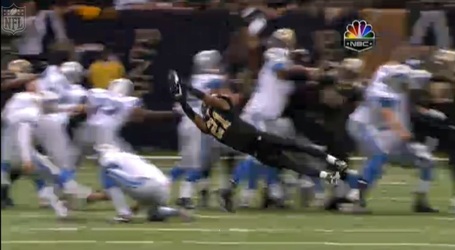 I suppose technically this is a special teams play but it kept three points off the board for the Lions, which is the definition of defense in my opinion. On a last-second field goal attempt to end the first half, cornerback Patrick Robinson came off the edge with a burst and did his best Superman impression in front Lions placekicker Jason Hanson to deflect the kick. 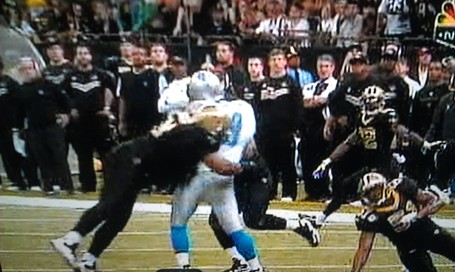 You won't find Shaun Rogers' name on the stat sheet for this play but I'm willing to bet Matthew Stafford won't soon forget the Saints defensive tackle was on the field for it. After scrambling and getting rid of the football, Stafford gets hammered by Rogers with one of those 'Remember Me' hits.

On second down late in the game, Roman Harper made a nice hit on tight end Brandon Pettigrew right after the catch to knock the ball loose for an incompletion. But it's what happened after the play that made me want to put it on the list, purely for the silliness. After the tackle Harper gets tripped up by Pettigrew and falls to the ground, let's say, extravagantly. Whether it was on purpose or not is up for debate. Then, to add insult to injury, Harper is forced by the referee to take a seat. If you look closely you can see a little hint of the Sharper Shake in that second and third frame.