Share All sharing options for: Who Dat History: The 1979 Season - Part One

By Ralph Malbrough, assisted by HansDat

As explained in Who Dat History: An Introduction, Part One of The 1979 Season takes a look at the draft, the season opener against the Atlanta Falcons, and the Week Nine game at the Washington Redskins.

Go here to read what the Saints official web site identifies as the key moments of 1979 (note: you'll have to scroll down a bit to get to the 1979 section), then make the jump to get a closer look at some of those key moments and much, much more...

The Saints decided against improving either their 16th-rated offense or defense with the team's first round pick (the 11th overall selection), instead drafting University of Texas Kicker/Punter Russell Erxleben. The Saints coached him at the Senior Bowl and ignored his poor practices and sore back.

Everyone in the Saints front office wanted the kicker except Harry Hulmes, vice president of player personnel.

Wayne Mack, in The Saga of the Saints, recalled it as such:

He alone stood against drafting a kicker, especially in the first round, but Personnel Director Bob Whitman and (Head Coach Dick) Nolan were adamant. All the scouts agree. Thus began that calamitous draft.

Let's all stand up and applaud Harry Hulmes for not dropping the toaster into the tub. Ed Daniels said at the time that everyone thought the Saints would take linebacker Jerry Robinson of UCLA (I wonder what Message Board Guy was called back then? Evening Edition Guy?).

Go here to see the 1979 Draft in its entirety. Look below to see Smerlas's moustache. 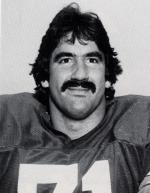 The later rounds of this draft would not prove much more successful, as 4th-rounder Jim "Doc" Kovach, a linebacker from the University of Kentucky, was the only player of note. Even that was faint praise as, according to Mack, Kovach only "provided good, steady play for six years."

The Saints had nine selections after trading three of their 12 picks away, and all they came away with were a spectacular bust of a kicker and a six-year contributor on defense.

The Saints were close to being a playoff team in '78, but this draft didn't get them any closer.

The 1979 season began with a home game against the Atlanta Falcons. It was the first time a Saints home game was broadcast on TV locally because the game sold out 72 hours before kickoff.

Saints fans wanted revenge for the two tough losses to the Falcons from the year before. One came on a "Hail Mary" pass caught for a touchdown, and the other on a pass interference call made in the end zone as time expired. The Falcons then scored on an untimed down from the one-yard line. The NFL later admitted the interference call was wrong. Saints fans wanted blood.

Let's go back in time to back to September 2, 1979. It's NFC football on CBS. Our announcers are Lindsey Nelson and Paul Hornung.

Behold the power of CBS's The NFL Today show opening in 1979:

There are barely any graphics during the game. No running clock with down and score in the corner. Hell, the announcers rarely even mention what down it is and only show the clock after the two-minute warning. Funny thing is, they had the ability, but no one thought, "It might be a good idea to but a graphic in the top corner showing the score, down, and clock" until Fox got the NFL in the mid 1990's.

They also rarely showed any sideline shots and not once did they show a close-up of Saints head coach Dick Nolan. The idea of a female sideline reporter wouldn't even be suggested until women got the right to vote in 1985.

Paul Hornung didn't mention once: "In our meetings with the Saints coaches they thought they could run the ball this week." I bet announcer Paul Hornung flew into New Orleans on Friday and partied on Bourbon Street till kickoff. Production meetings, what's that?

The broadcast had a very "mom and pop" down-home feel to it and most importantly, the Fox Robot disaster wasn't even a dream in someone's head. If you had explained to someone in 1979 what the first down line was, they would have you committed.

Coming back from commercial before the 3rd quarter, Nelson promoted CBS's new sitcom Working Stiffs, starring James Belushi and Michael Keaton. This just proves that 30 years ago America suffered from crappy Belushi television shows like we do today. NOTHING EVER CHANGES!

By the way, if the NFL Network would play entire game broadcasts for old games including commercials and have two fans of the teams do commentary like VH1's ‘I love the 80's', tell me you wouldn't watch. I'd not only watch, I'd audition to be the designated Saints fan for all old broadcasts.

The Saints offense did whatever they wanted against Atlanta, and they did it out of the same formation the entire game: two receivers and two running backs. By my count, the only time they had three receivers in the game was on the final play in the fourth quarter for a Hail Mary.

Chuck Muncie was an absolute animal in this game. He had 22 carries for a team-record 161 yards. It included a 69-yard run which was a combination of power and speed that was spectacular. He also threw a touchdown to Wes Chandler where he stumbled, and then I guess thought, "Screw it! I'll just throw it up." Chandler made a great catch to give the Saints a 14-0 lead. When Muncie wasn't doing piles of cocaine and beating his wife, he was a force. He was as big or bigger than any linebacker the Falcons had.

Another Saints player who jumped out to me was Chandler. He caught six passes for 205 yards and a score. I can't even think of a Saints player of the last 20 years to compare him to. He reminded me of the Panthers' Steve Smith because of his body control.

While the Saints offense was fun to watch, the defense's performance was as bad as any I've ever seen the Saints deliver. They had three rookies in the secondary and both David Gray and Ricky Ray took turns getting worked by Falcon receivers.

Atlanta QB Steve Bartkowski threw for 312 yards and if he had been more accurate, it could have been 400. This secondary was worse than the 2008 version. This was not its worse performance, not even close. If the Chronic were around, Andrew definitely would have had a weekly post venting about every layer of the defense.

The secondary was atrocious, but the front seven was even worse against Atlanta. They generated no pressure, and were gashed for 257 rushing yards. They only made one good play in regulation. Atlanta was driving for the clinching TD, up 34-31 in the 4th. The Falcons, after running the ball down the Saints collective throat, elected to pass inside the Saints 20. That's when the Saints #1 pick from 1977, DE Joe Campbell made probably his only significant contribution as a Saint when he forced a fumble that the Saints recovered.

Archie led the Saints to the game-tying field goal, but if Chandler had read the blitz correctly, Manning could have hit him for the game-winner. Instead, Erxleben kicked the game-tying field goal. He had to make it twice because on the first attempt, the Saints false-started. Get this: on the second attempt, CBS's video went black and up popped the CBS "eye" logo, and the dreaded technical difficulties notice! Did you hear the loud boom? That's the sound of a 4000-comment thread threatening to burn CBS to the ground on the Chronic if the internet existed in '79.

As strange as this is going to sound, the Saints offense cost them this game. Archie threw an awful red-zone interception with the Saints leading 31-27 that could have really put the screws to Atlanta.

Then the offense couldn't capitalize on a turnover to start overtime. The Saints intercepted Atlanta's backup QB as Bartkowski was injured at the end of regulation. They had ball at the Atlanta 45, but failed to score.

The next time they got the ball, long snapper John Watson sailed the ball over Erxleben's head. Then Erxleben scooped it up and connected with a wide-open Falcon, James Mayberry, who waltzed in for the score. Falcons won 40-34.

The second game we focused on from 1979 was the Week 9 showdown with Washington Redskins. The Saints won 14-10, and for the first time in their history were in first place. Archie Manning hit Wes Chandler on 45-yard touchdown strike and connected with him on a 3rd down pass that set up another score. Box score.

Chandler caught 65 balls for 1069 yards and 6 scores in 1979 and after watching all the 1979 games I can tell you teams were absolutely petrified of Chandler beating them deep. In Week 2 against Green Bay, he caught 10 passes as the Packers played 10 yards off him. Archie would just take the snap and throw what was essentially a wide receiver screen. The funny thing was Hank Stram was doing color for the game and was calling out what play the Saints should run and he was right like 85% of the time.

The NFL had just made contact with receiver after 5 yards illegal and defensive backs hadn't totally figured out how to cover receivers without assaulting them. Chandler was pretty much uncoverable and I'm convinced he could have caught 100 passes. By the way announcers gushed over him. I think Sonny Jurgensen during the Redskins game was going to ask him out to dinner.

If you hate the network halftime shows with all their computer graphics, fake laughs, and fancy scoreboards, you would have loved the CBS 1979 halftime show scoreboard. It consisted of a camera panning to scores taped to a wall.

The Saints goal-line defense was equally as great as CBS's latest technical marvel of a scoreboard. The Saints turned back Washington on six straight goal-to-go plays in the 3rd quarter. The Saints stuffed two Washington running plays, and then sacked Joe Theismann, but the Saints were called for holding. The Saints then held Washington three more times. Mike Fultz, a defensive tackle no one has heard of but his own family, was at times dominant. Tommy Myers took down John Riggins just short of the goal line and the Saints topped it off when Eric Felton blocked a field goal try. Washington had the ball for 8:03 and got nothing.

The Saints also turned back Washington from the two-yard line at the end of the fourth quarter. Elois Grooms wrapped up the win by getting the Saints' 7th sack of Theismann.

Watching the game with no scoreboard in the corner makes you lose all concept of time. Is it still the 3rd quarter? What day is it? When does The Jeffersons start? (It starts at 8:30 every Sunday in 1979)

The Saints defense against the Redskins was like Charlie Sheen being sober for an entire weekend: an extremely rare occasion that got less frequent with each passing week.

* Yao Ming at a midget convention would be less awkward then the United Way ad with the Saints Joe Federspiel. I haven't seen someone have so much trouble reading cue cards since Michael Douglas in ‘Don't Say a Word'.

* Sonny Jurgensen's post-game interview with the entire Saints secondary was comedy gold. Tommy Myers had been on awful Saints teams for eight years and looked like a guy who just found a 10-dollar bill and had convinced himself he won the lottery.

Thus ends Part One. In Part Two, we'll cover the worst loss of Archie's Saints career, the season finale against the eventual NFC Champion Rams, and John Mecom's disastrous front office shuffle and the cocaine-filled locker room which led to the 1-15 1980 season.