Share All sharing options for: Cam Heyward & Saints are a Storybook Fit 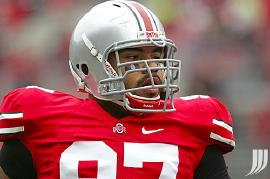 With the NFL draft fast approaching we all have to be wondering who the Saints will take at No. 24 overall. If you look at a lot of the NFL mock drafts out there, almost everyone has the Saints taking some defensive tackle or defensive end. The recent signing of Shaun Rogers likely changes little in the Saints drafting strategy, too, because he's turning 32 this year and only signed a one year contract. Which makes sense to most of us because the Saints don't really have a glaring deficiency on their roster with the possible exception of  their ability to get to the quarterback with the front four.

One player that could wind up the pick at No. 24 for the Saints is Cameron Heyward. While he fits the profile based on his position, skill set, and projected draft spot, Heyward is a natural fit with the Saints based on so much more.

Most of you know this by now, but Cam Heyward is the son of former Saint fullback Craig "Ironhead" Heyward. I'm assuming most of you know who that is and had a chance to watch Ironhead play during his time with the Saints. For the younger and newer fans, suffice to say the nickname was fitting. The guy had a running style that just punished people. You think Mike Bell ran with ferocity in 2009? Multiply the violence of his runs by ten.

As luck would have it, Craig "Ironhead" Heyward was the 24th pick overall in the first round for the New Orleans Saints back in 1988. Twenty-four is where the Saints sit in the first round of this upcoming draft. Ironhead played five memorable seasons with the Saints before finishing out the last six years of his career with four different teams.

In a sick twist of fate, Ironhead would die at the very young age of 39 from a brain tumor. The condition forced him to retire in 1998, but thanks to a 12 hour surgery and 40 rounds of radiation he was able to become cancer free. Sadly the tumor returned in 2006 and he was not able to survive it.

I remember reading an article about five years ago in which Ironhead talked about how much he feared death and how much the whole experience left him scared. The thing that hit home most was that I remembered this hard nose football player, arguably tougher than any player I ever watched, all of a sudden turned into a shell of fear.

That's the circle of life for you. But I can tell you that Ironhead was a great guy and now his son is entering the NFL draft. Based on his pedigree and his DNA, I think it's safe to assume he'll have the character and ability to fit right in with the Saints. Based on the great memories of Ironhead, who's legacy ended way too soon, who better than to carry the torch of his name than Cam right with the New Orleans Saints?

Here is the write up that Cam has on NFL.com:

"Overview: Heyward is big versatile defensive end that can play in a 4-3 or a 3-4 at the next level. He is a powerful athlete at the point of attack that can eat up blocks in the running game and uses heavy active hands to shed quickly. He possesses a less than ideal burst, but is a relentless pass rusher that gets more sacks than he should. His greatest asset is his versatility, as he can control blockers to be effective in a two-gap scheme, but also could have an impact as a traditional defensive end in a 4-3. Heyward will likely not last past the first round"

"Strengths: Heyward is very strong with a great frame. Quick off the ball, delivers a violent punch to jar offensive lineman and shows good hand technique to slip blocks. Plays with sound leverage and anchors effectively in the running game. Versatile athlete that can play multiple positions along the defensive line. Four-year starter and very durable."

"Weaknesses: Does not have the burst to consistently get after the quarterback or make plays from the backside. Plays with a narrow base at times and can be pushed out of the play. Takes too long to recognize screens and draws and gets caught upfield too often. A bit inconsistent with his play."

Funny enough, Heyward's write up reminds me of another Ohio St. defensive end that was drafted by the Saints in the 1st round. Will Smith, who's in the middle of a very strong NFL career, was drafted 18th overall by the Saints in 2004. Not that Smith is going anywhere anytime soon (hopefully), but who better than Heyward to put alongside him as a bookend defensive end and enventual heir? Clearly Sean Payton has no issues with Ohio State players either, because he took Malcolm Jenkins 14th overall in 2009.

The bottom line is this: on football merit alone, I believe Cam Heyward would be a terrific pick for the Saints at No. 24. Once you throw in the historical element, I think there's a nice personal touch to his story that makes him an even better fit. Let's face it, Saints football has always been about more than just X's and O's. The Saints are a storybook franchise so who better than Cam Heyward to have on the next page?

How would you feel about little Heyward in a Saints uniform?