Share All sharing options for: Canal Street Chronicles: A Trip Down Memory Lane

Let's take a little break from the lockout and draft talk and have a little fun.

Not too long ago, a friend of mine turned me onto a website called the Internet Archive, or the Wayback Machine. Perhaps you're familiar. If not, you might guess that it's a magical corner of the world wide web where you can step back in time and view the internet from any given point in the past.

Naturally, I stepped right into the Wayback Machine and went straight to Canal Street Chronicles circa 2007. You remember 2007, right? When Charlie Sheen was wild but not yet crazy? In fact, I went all the way to the first web capture available in the archive, June 17, 2007, which takes us to the very beginning of our community here. 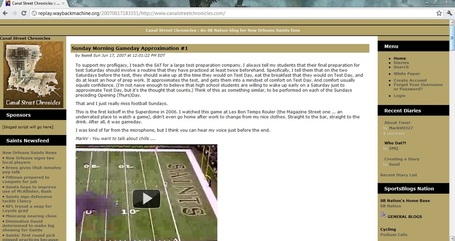 That is some awe-inspiring web design right there, my friend. Seriously though, things were a lot more basic back then. We weren't blessed with all the bells and whistles we now take for granted. You can bet your ass there were no auto-updating comments so during open threads we actually had to...GASP...keep refreshing the page!

You'll notice the section on the right called "Recent Diaries." Diaries were actually the forebearer of what you now know as FanPosts. You can imagine the term diary wasn't very popular among the bloggers so the name changed when the network upgraded to the current version. FanShots were added during the big switch as well.

You will also notice that the original blogger in charge was someone named Sunil. You can get an idea of what his vision was for Canal Street Chronicles by reading his first ever post right here.

I like the idea of the blog-as-community. Take a look at the most popular sports blogs, and you will see a place-for the sake of brevity, let's not draw out the differentiations between tangible places and e-places-where the readers participate almost as much as the blogger. To be sure, the blogger has the most responsibility, to create and disseminate content that will be appealing to the first-time and the repeat reader. But writers are, one more universal definition, vain creatures. It's not the recording of one's thoughts that is the vain act, it's the sharing. And we wouldn't be doing this if nobody were reading. If a blogger posts and nobody reads it do they make a sound?

I hold a very similar view and hope I've followed through with our shared goal for Canal Street Chronicles. Sunil was a really good writer and very funny. Peruse the archives when you've got some free time and check out some of his stuff. You will be sad he's gone. We owe a lot to him...let us have a moment of silence.

After seventh months, he had to give it up and after three months of nothingness here, I came along in early April, 2008. Not long after, we migrated to version 2.0 and the one your currently experiencing. The rest, as they say, is history.

And here's a little fun fact: the original blogger, Sunil, wanted to actually name Canal Street Chronicles either "Sainting the Aint's" or "The Cult of Saints." What do you think?

How many of you out there remember the old format? New and old, it's time to share your Canal Street Chronicles memories...