Aw, Because It's Carnival Time!!

Share All sharing options for: Aw, Because It's Carnival Time!!

Welcome to Mardi Gras weekend, everyone!!

In honor of this great holiday, or most holiest of "holy cow!" days, I present to you this link to Saints Mardi Gras wallpaper for your computer desktop.

Make the jump to read more about my Mardi Gras Memories and to find out what awaits you in today's Fleur-de-Links post.

As a child this was one of my favorite times of year. Growing up in New Orleans, and then Covington, has left me with great memories of Mardi Gras. Take a walk with me, will you?

We'd have a whole week off school, and spend the first long weekend of it (Saturday - Tuesday) attending parades, spending time with family and friends.

The Saturday night before Mardi Gras, for Olympia, we'd go to my uncle's law office on Rutland, where he always hosted a party. We'd gather early there, goof around, talk, and eat sandwiches, fried chicken, king cake, and the children would have soft drinks while the adults loaded up on scotch, wine, and beer.

After everyone had gone to the bathroom one last time, and everyone filled up their "go-cups", we'd walk a couple of blocks up to Boston to watch the parade. It wasn't the biggest parade, but fun to go to.

One year at Olympia, my Dad met a couple of college guys from Colorado who were biking around the country and my parents invited them to spend the night with us. We gave them sleep accommodations, and access to hot showers and laundry, and then a ride into New Orleans the next day.

We'd wake up early the next day and drive into New Orleans, where we'd spend the next couple of nights at my grandmother's house just off Audubon Park on Exposition. Thoth was the big parade for us early on Sunday. We'd catch the parade near the start of it on Henry Clay, which was just a few blocks from my grandmother's.

My parents and family were skilled Mardi Gras revelers - every parade we watched was always close to family or friend's home so we had access to a bathroom and a quiet place to sit/sleep if you got "all partied out." My Dad even made a wooden seat with sides and a sliding bar to keep the kids tucked in that he bolted to the top of a ladder every Mardi Gras. Man, was that a great way to be up high watching parades as a child, but it scared the bejeebers out of me at times to be sitting in it, as it felt a bit precarious, even with an adult standing up behind you.

Here are some pics of the ladder seat set-up. 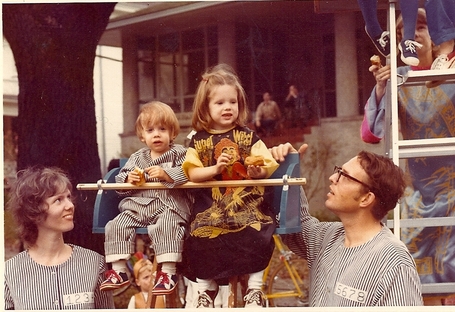 That's my sister as the witch, and my parents and me as the prison family. 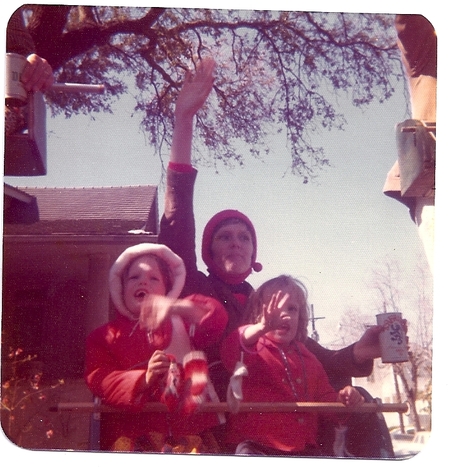 And here are my sister, mother and me on a colder Mardi Gras day. Don't spill your beer, Mom!

At some point that afternoon, after the children played in the park and the adults napped, we'd head over to my aunt's house on Toledano, which was not far from St. Charles Avenue, and served as our Bacchus base. At this house, there'd be a big party with the same family folks, but lots of other friends of my aunt and uncle, too. Good times. There was always something special about Bacchus - it was always my favorite night parade to go to, and it felt BIG.

We'd take it easy on Monday, and maybe go to the Monday night parade - Orpheus? Proteus? I can't honestly remember.

Fat Tuesday was a great day. We'd wake up super early and bring our ladder/seat and cooler to my Dad's best friend's parents apartment/condo on St. Charles to watch Rex and two truck parades, Elks and Crescent City.

They'd set up our ladder seats and coolers right on the parade route, sometimes on the neutral ground, sometimes next the awning at the front of the apartment building - it was a two-story number that had a big bricked courtyard with lots of bushes/trees, and we always had to memorize the street number of it in case we got lost or just separated from our parents - it was 3201 or 1301, something like that.

We spent most of the day on the route, and could always go back to the apartment for a potty break or just a break from the madness. I can remember playing adventure games in that courtyard with my friend, using the plastic guns and swords we'd catch from the parades, dodging and hiding among the trees and foliage, and letting our imaginations run wild.

One year, we even met Archie Manning! My Dad and I each had our pictures taken with him... 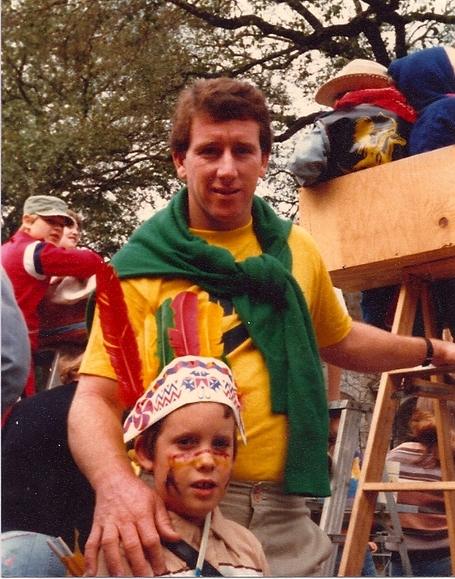 Late in the day, once the traffic had cleared out, we'd drive back to my grandmother's house, crash, and then go back to Covington on Wednesday. As I said earlier, Good Times.

So what are your Mardi Gras Memories? Take a moment and share them in the comment section below...

Oh yeah, before I forget - come back in a few hours and catch the news and tweets in the Fleur-de-Links post. You'll find Grandmaster Wang's "PT signs" column, a CBA round-up, and Walterfootball's Pro Day results from Tulane's Pro Day - Roll, Wave!!!