With the twelfth pick of the 2011 CSC Community Mock Draft, the Minnesota Vikings (represented by HansDat) select...

The general consensus from my areas of research - lurking on the Daily Norseman and Walterfootball.com - brought me to the following areas of need for the Vikes (in no particular order): QB, OL, secondary, OLB, DL.

Given that for the most part, the top-flight, high first-round talent (except for Auburn's Nick Fairley, whom I nearly selected instead of Smith) at those positions was gone, it seemed a no-brainer to select the top OT of the draft at the 12-spot, so that plays like this might be eliminated from the Vikings playbook:

No matter whom they have taking snaps next season (Joe Webb, Patrick Ramsey, Jake Locker, Ryan Mallett), they cannot have him feeling heat like that all the time.

So, why Tyron? Here are his measurables:

Check out that hand size - 11 inches of power for pushing, holding and staving-off rushers and tacklers, I tells you! Actually, I'm not sure what to think of that hand size.

And here are some possibly conflicting blurbs about him - first from NFL.com:

Overview: Smith is one of the best prospects on the hoof in this class. Blessed with an ideal NFL frame and has the outstanding feet and athleticism necessary to be a starting left tackle. Does a great job staying in front of speed rushers, locks on and sustains, and can anchor against the bull rush. Shows solid power in the running game and is really productive out in space. Football IQ is lacking. Fails to find his target at times in the running games and is a tick slow recognizing blitzes. Smith could come off the board early in the first round due to his rare physical gifts.

Strengths: Smith possesses ideal height and length combined with rare speed and mobility for an offensive tackle. Can sink his hips to counter the bull rush. Moves his feet really well to shadow quicker speed rushers. Very comfortable blocking in space pulling on the perimeter and getting to the second level. Has a mean streak.

Weaknesses: Would benefit from adding more bulk to his frame. Does not have natural football instincts. Overall awareness is lacking. Can be baited by stunts and twists. Does not recognize the blitz as quickly as you'd like to see. Can be beat by speed-to-power pass rushing moves.

And now from ESPN.com: 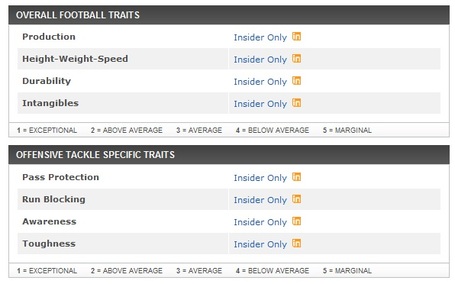 Well, I'm not paying ESPN Insider fees, so that's all we're going to get from espn.com and Scouts, Inc. on Tyron Smith.

Gets to the second level effectively

Not a powerful, driving run blocker

Could use more lower body strength

Must prove he can be effective after putting on weight

Only two years experience - both at right tackle

Summary: Tyron Smith is only 20 years old and has it all in front of him. He declared early for the 2011 NFL Draft, which raised some eyebrows. If draft projections hold it is the right move. Next year, he might have been in the same class as his teammate Matt Kalil, who is the starting left tackle for the Trojans.   It is still an issue with some skeptics who wonder why Smith was relegated to the right side, yet is such a highly regarded prospect. The answer is pretty simple - both guys are very talented and in the USC offense, it wasn't that big of a deal. Smith probably would not start immediately in most systems, especially on the left side, but his development could be sped up if he lands on a team running a zone-blocking scheme, which he worked in at USC.

And there you have it, the first purple brick of rebuilding the Vikings in the post-Brett, post-Brad Childress era. Vaya con dios, Leslie Frazier, vaya con dios.