With the eighteenth pick of the 2011 CSC Community Mock Draft, the San Diego Chargers (represented by DrewBreesManCrush) select...

It is surprising that a team that ranked #1 in the league in fewest yards allowed (271.6 per game) and #1 in yards gained (395.6 per game) needs that much help at all. Anybody who watched this team dominate on offense and defense has to wonder how these clowns managed to lose to the Raiders twice and miss the playoffs. But the Chargers special teams were very special. I remember hearing the announcers claim at one point last season that the Chargers had more punts blocked than the rest of the 31 teams combined, not to mention all the returns for touchdowns (I'm too lazy to count them all, but there were a lot). 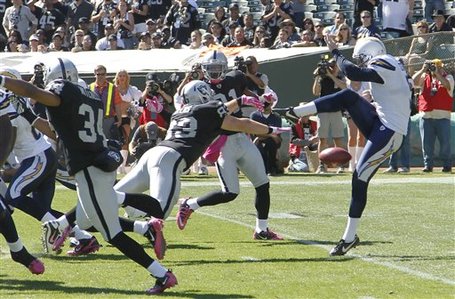 Unfortunately for the Chargers, I checked Kiper's Big Board and there was no specific mention of lineman who specialize in blocking on punts. So moving on the next biggest area of need (besides a stadium, special teams, or a ring) the Chargers need a defensive end. Most of the league is looking for help on the D-line, so this isn't that big of a surprise. Luckily the draft is pretty flush with lineman. They need help with a 5-technique DE in their 3-4 scheme, and that's where Muhammad Wilkerson comes in.

I was thinking of drafting a wide receiver before our mock draft draft began, after the terrific handling of the Vincent Jackson situation by the holder of the greatest nickname ever AJ "Lord of No Rings" Smith. Alas, A.J. Green and Julio Jones were already gone.