Does Sean Payton Call Too Many Passing Plays?

Share All sharing options for: Does Sean Payton Call Too Many Passing Plays?

Everyone knows that Sean Payton loves to pass the ball. It's such an accepted fact that few challenge the notion. However, I was curious (and bored) and started wondering if Payton really calls that many more passing plays than the rest of the league.

So I dug deep into some stats and ended up documenting the amount of plays called for both runs and passes. Then, I compared those to the total plays to find the overall percentage. Finally, I threw in "average pass efficiency" and "average run efficiency," which ended up being fancy words for "yards per attempt" and "yards per carry."

If you don't like stats then I'm warning you now, before you make the jump.

Before I go into detail explaining my process, I figured it would be easier to follow along if you could see the data first and be able to go back to it as I explain. 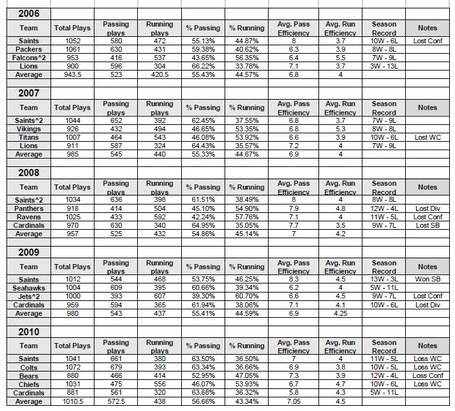 (Click image to enlarge. All stats came from NFL.com)

As you can see, all five years he's been the head coach of the Saints, Payton's called plays are there, in order from 2006 to 2010. Now to explain the other teams you see on the list: I wanted to compare the Saints playcalling to the most extreme versions of other offenses. I included the teams with the most passing and rushing attempts, and the teams with the least passing and rushing attempts. These teams fluctuated from year to year, and sometimes had one team filling two positions (In 2006, the Falcons had both the largest amount of rushing attempts and lowest amount of passing attempts) so I designated those teams as different.

After getting those, I just copied numbers from the NFL website into a spreadsheet and added little details, e.g., the results of the season.

Only thing left to do is simply read the data, which I'll try to go over.

To answer the question I posted in the headline, yes, Payton calls tons of passing plays. Maybe too much. He was above average every year besides 2009 (the year the Saints won the Super Bowl) and almost always had a 60/40 pass-to-run ratio. However, this data actually reveals a lot more. It also raises even more questions then I expected.

The first thing I see are the 2006 passing numbers: Payton had a 60/40 pass-to-run ratio right out of the box. However, he made the playoffs and almost took the Saints to the Super Bowl.

All in all, it's hard for me to draw any solid conclusions. The only thing I know for sure is that Payton likes calling passing plays, our eyes and the data agree on that.

More importantly than my thoughts, though, are yours. I want to hear from the community on this. How do you feel about Payton's playcalling after seeing the numbers behind it? Do you notice something that I didn't mention earlier? Do you have any opinions to add?