Share All sharing options for: Getting to Know Saints Draft Pick Cameron Jordan

I think it's safe to say that because he wasn't expected to get selected by the Saints during the 2011 NFL Draft, not many Saints fans know too much about the teams newest defensive lineman, Cameron Jordan. With his draft stock so high as an expected top 10 pick during the off-season, he just wasn't on our radar.

So to help get to know him better, I've enlisted the services of his college fans over at SB Nation's Cal Bears site, California Golden Blogs. Their writing team was incredibly helpful and willing to shed some light on Cal's former funny man on campus. So read on to see the results of our conversation and to learn more about Cameron Jordan both on and off the field.

Dave: Let's get straight to business: what are Cameron Jordan's strengths on the field?

OhioBear: Jordan has a non-stop motor, kind of like former teammate Tyson Alualu (1st round pick of the Jacksonville Jaguars in 2010).  He is a good pass rusher.  He is also quite versatile - he can be adept as a DT/DE in a 3-4 or a DE in a 4-3. I think his versatility is probably why his stock rose so high.

Dave: What are the weaknesses in Jordan's game?

OhioBear: Jordan has a really good swim move as a pass rusher, but he will probably need to develop more techniques to be consistently effective in the NFL.

Solarise:  None besides the fact that Cam had two first names.

Dave:  What can Saints fans reasonably expect from Jordan in his first year?

OhioBear:  You should expect him to certainly be a regular part of your D-line rotation.  I wouldn't expect him to be Will Smith right away, but I think it is reasonable to expect him to eventually (if not right away) be an every down kind of a defensive end.

Dave: Why do you think Jordan slipped so far down the draft board?

OhioBear:  That was a little bit surprising. I don't think many Cal fans expected him to fall past New England because Cam seemed such a perfect fit for New England's 3-4 scheme. As for why other teams passed, my theory is that it was because Cam does so many things well but does not have one attribute that is knock-your-socks-off outstanding (e.g., the athleticism and speed of Aldon Smith or Robert Quinn; the dominance of a J.J. Watt). Some teams who took DEs before Cam maybe went for the "bling bling" of some of those other guys.

Dave: What is Cal fan sentiment of Jordan?

OhioBear:  Cam is a very popular player. It has a great deal to do with his personality: he is a very funny guy off the field and is also intelligent. For Cal fans, what's not to like?

Dave:  Tell us more about Cameron Jordan off the field. What is he like?

TwistNHook:  A real cut up.  He is exceedingly intelligent and funny.  This is based on not only multiple news stories that tell us this, but also our personal experiences chatting him up after Spring Games or during FanFest.  For example, here is a story of us joking around after the 2010 Spring Game:

Cameron Jordan loves to play for the camera.  When he came off the field, I was right by him.  I was all "Hey, good luck next year."  Then, seeing him with a big beard, I was all "Hey, Cameron, you gonna grow out your beard?"  He's all "Yeah, I think I'll grow it down."

I told him "I think the Moses look would look good on you.  But I'm not sure you could pass as a Hebrew."  I'm not entirely sure how conversational he is regarding Beta Israel, the Ethiopian Jewry, so I decided not to continue down that path too much.  He told me that he called it his thinking beard.  I said "I say, less thinking, more sacking!"  He seemed to like that and introduced himself to me.  I took his hand for a quick shake and in that moment could have perhaps introduced him to CGB, tried to get an interview, or segued into even more embarrassing Jewish jokes.  My segue ways are terrible and I feel weird pimping CGB to real, honest to god Cal athletes, so I just left it at that.  I am not the CGB whore you all take me for.

But I do think Cameron should go for the Moses look.  It's so hot right now!

And here he is mugging for the camera: 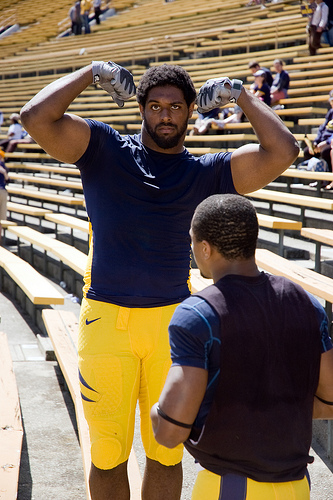 Even he stated he likes to have fun off the field when we interviewed him:

What was the funniest off the field story of your Cal career?

There's been so many funny moments on the field as well as off that it's too hard to say which one was the funniest... One day me and a few teammates went around the city calling our boys out of their places so we could pelt them with water balloons.  We teamed up with a few girls, so that it wouldn't be obvious that we were setting people up.  It was hilarious to see them come out and start running barefooted.

So, this is a good clubhouse guy who is focused on the field, but will help keep things light and relaxed off the field.

Dave:  What's your favorite Cam Jordan memory?OhioBear:  Here is mine. This is a quarterback hurry on Andrew Luck, forcing an interception that won the game for Cal. Another favorite memory is of Jordan making two sacks on back-to-back plays to seal the deal in a win over Arizona in 2009, seen from 8:45 to 9:05 of this video.

Dave:  Do you have any random/interesting facts about Jordan for the fans?

TwistNHook: He loves Korean BBQ.  He raves consistently about a Berkeley restaurant called Steve's Korean BBQ. Is there good Korean BBQ in New Orleans?  There's gotta be good BBQ in general (Korean or otherwise), it's the South