I've decided to break down some of the plays that stood out in my mind from the Saints ugly loss to the Texans last Saturday. Given the disappointing play by the Saints, you can imagine what follows isn't going to be pretty. Surprisingly, however, I mostly pick on the offense, not the defense.

Make the jump to relive the nightmare, one frame at a time. Sorry about the quality on most of this but I don't have a high def TiVo and Payton was late getting me the coaches tape. Click any of the pictures to make them larger.

This was the fumble play to end the first drive. You can see Drew has dropped back to pass. Jermon Bushrod, meanwhile, is looking for a contact lens. Bushrod's assignment (#94) wound up going straight to Brees. 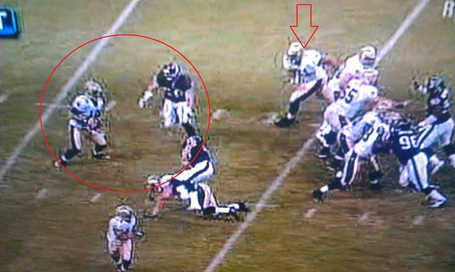 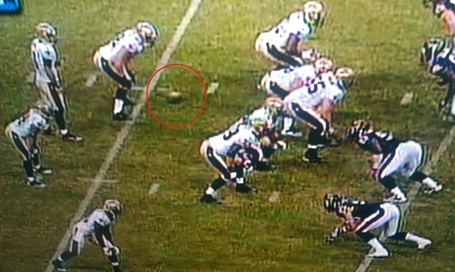 Both of these pictures are from the same late third quarter play in which Charles Brown appears to have not known the snap count and his missed assignment causes Chase Daniel to get sacked and fumble (see first photo). I have a different theory, however. Chase Daniel doesn't appear to be ready for the snap (look where the ball is and notice his hands still at his side) and the rest of the line is a little slow to react, though not as slow as Brown (see second photo). This one looks more like the fault of a premature snap by the center, Matt Tennant. 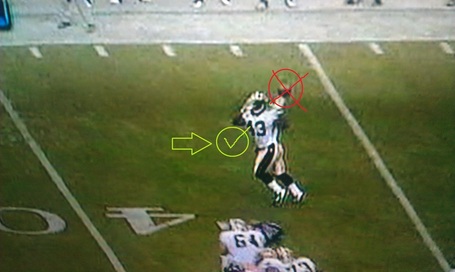 This was one of the screen passes that Darren Sproles dropped. You can see it's not entirely his fault, as Brees threw it high and behind his receiver, as opposed to leading him. 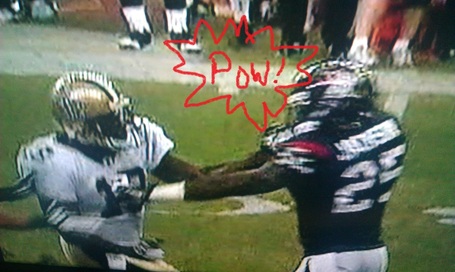 Devery Henderson connects his second left hook of the night. What the hell was he thinking? Okay, so that's not really breaking down a play but it did effect the game. 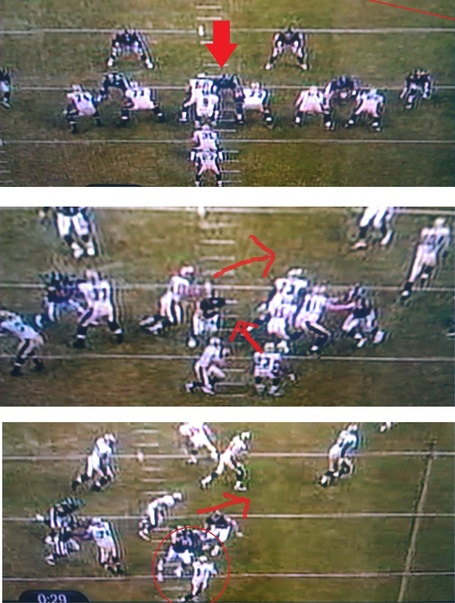 This is the start of the second drive. This is a pass play and after the snap, Olin Kreutz and Jahri Evans immediately go out right to block. But Kreutz practically ignores the DT, barely even bumping him on the way out. Pierre Thomas, who eventually becomes the receiver of a dump pass, doesn't chip the oncoming defender either on his route. It's a free and clear path to Brees. FML. That defender gets right in Drew's face and forces him to make a dangerous throw that turns out to be a completion to Thomas and a nice sized gain. Lucky. 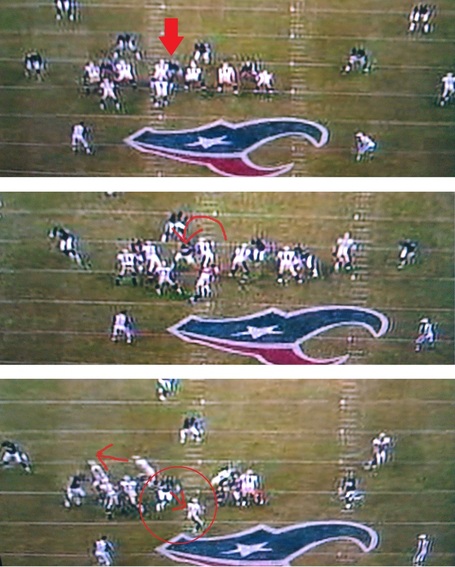 Here's a similar play to the one above with a similar breakdown. Right off the snap, the defensive tackle jumps over to the next gap and blows right past Olin Kreutz, who is preoccupied again with running out left to block. Brees has zero time and a defender immediately in his face, causing him to throw the ball away in dangerous fashion. It nearly gets intercepted and looks all kinds of Slap Ya Mama ugly.