What Up With Dat?: Preseason Potpourri

Share All sharing options for: What Up With Dat?: Preseason Potpourri

Below are the rest of my answers to this weeks reader questions submitted Tuesday. Special thanks to all those that participated. Feel free to continue the discussion in the comment section below.

Do you think Joe Morgan makes the final 53 and do we keep Clint (Splint) Injuryram? - Big D.

I think Morgan will either make the final 53-man roster or will get stashed away on IR for the year. Clint Ingram probably will not make the team, though there is the possibility that he may be placed on PUP.

How does Joe Morgan contribute to the team this year? What do you think will be Morgan’s future with the Saints this year? - Catfish S.

See above. If he plays, I think Morgan contributes only minimally as a wide receiver, perhaps with some opportunities as a punt returner.

Is Sproles going to return kick/punt returns for the Saints? - Grounded C.

When the Saints signed Darren I would have thought the return duties would be his job to lose. But because we haven't seen him used like that so far this preseason and because Payton may value Sproles more in his offense, not wanting to risk injury, they may not plan on having him return kicks and/or punts. To make you feel a little better, Sproles averaged 24.6 yards per kickoff return last season while Courtney Roby had near equal production with a  23.8 yard average.

What are your feelings on the play of Drew Brees this preseason, and what do you think about all of the talk of a "steep decline," or any decline at all? - J. Henn

Well I don't think anyone is saying Drew is in "steep" decline. If anything, it's a long, slow decline. Do I think his best year(s) are behind him? Yeah, unfortunately. Does that mean he's no good anymore? Far from it. I think the bell curve below is a good graphical expression of my opinion of Drew Brees' career. 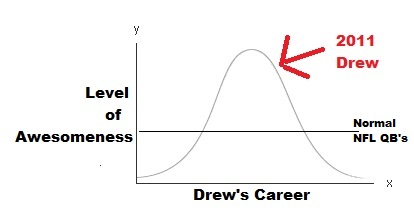 If you had to choose one of these predictions to come true, which would it be? 1) The Saints win the Super Bowl in 2011 and repeat in 2012 (Brees ties Brady for rings) but they then suffer a sharp decline and are once again referred to as the ‘A-word (sorry, I can’t bring myself to say it) for the foreseeable future. 2) The Saints never make it back to the Super Bowl, but continue with an impressive winning record and command respect as a team and organization for the foreseeable future. Any hybrid of the above is not an option. - Snowboard K.

This is a tough one. This may not be the popular opinion but I think I would actually go with option #2. Winning the Super Bowl twice again would be lovely but many more years of complete ineptitude would be miserable. Having an impressive winning record for years and years would still keeps things interesting and fun.

Who would you rather play for the Saints: Obi-Wan Kenobi, Spiderman or Wolverine? - Triple A.

I'd have to go with Obi-Wan on this one. He has the ability to control things with his mind. That seems like it would be a more useful super power than spiderwebs or adamantium claws, which I'm not sure would be legal under the current rules of the NFL.

Do you think the issues with the offensive line vs Houston are just from them needing to get used to each other? Or do we need to hope that the team brings back Goodwin? - Horp R.

First of all, Jonathan Goodwin is a gone pecan. He ain't coming back so you can forget about that as an option. But yes, I very much think the offensive line issues are merely a lack of chemistry and comfort. I expect their play to only get better and better as the season goes on, starting with the game tonight.

Safety/Guard/Tackle: I was just wondering if there's anyone still out there good enough (and unsigned) to address the Saints lack of depth at these positions. - Valmo

No. Anyone worthwhile is already on an NFL roster. Perhaps after final cuts, however, there will be someone worth picking up.

Right now I think the biggest problem is their lack of depth at safety. If Malcolm Jenkins gets injured, I fear every game without him will look like the Saints playoff loss to the Seahawks last season. On the flip side, I think the teams greatest strength is the culture they've created both on the field and off; their attitude, chemistry, cohesiveness and veteran leadership.