In Defense of Roman Harper and Gregg Williams

Share All sharing options for: In Defense of Roman Harper and Gregg Williams

I understand we're all frustrated and upset following the Saints' emotional 36-32 loss to the San Francisco 49ers yesterday; that's only natural. But some of the talk I'm hearing from supposed Saints fans is just a tad ridiculous. I'm talking about those fans who think both Roman Harper and Gregg Williams should take a hike. Are you people serious?

I'd like to go over some quick stats for a second, just so we're all on the same page here. Roman Harper tied for a team high eight tackles, had 1.5 sacks, forced a fumble, rushed the quarterback at least once more and batted a ball down at the line of scrimmage. Just so we're clear: that's the guy you want to blame for this loss? That makes complete sense, those are some pathetic stats.

Oh, you probably think Harper was the safety getting burned by Vernon Davis on two key plays at the end of the game, don't you? No, you're just having 2010 Seattle flashbacks. This year it was Malcolm Jenkins getting schooled (playing cornerback?), our new summer-long scapegoat. High five! You might remember him from such plays as: 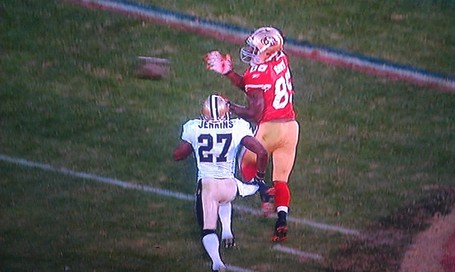 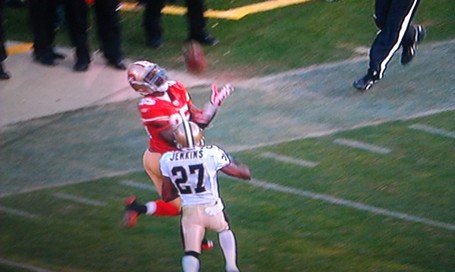 Ouch. Good luck getting those images off the back of your eyelids for the next few months as you first close your eyes and try to sleep at night. Did Harper get out-muscled on game-winning Vernon Davis catch? Yeah, it wasn't his shining moment and the coverage was weak. But he's certainly not deserving of complete scorn.

And while I'm defending people like it's my job, I've got to stick up for Gregg Williams as well. Where the **** did all of this Gregg Williams hate come from all of a sudden. I've never seen so many people turn on a coach that quickly since this past Monday's BCS game.

Look, I'm a bit baffled by the defensive play calling on the final two series' of the game, too. What the hell was that? We'll have to examine that later. But I'm not calling for the man's head on a platter. After all, it was his defense that shut the 49ers down in the middle of the game and allowed the Saints to come back from a 17 point deficit, despite turning the ball over five times. FIVE TIMES! AND THEY STILL HAD A CHANCE TO WIN!

If anything, Williams deserves a hard pat on the back for keeping the Saints alive in this one. He's not a freakin' miracle worker. Payton's offense crapped the bed when it came to ball security; it was up to Williams to clean it all up like it never happened. And do I need to remind everyone how incredibly crucial he was in the Saints first championship? Have we forgotten that? Doesn't he at least deserve a little more of respect?

Let's just take a few days to cool off before we start saying something stupid we're going to regret. Believe me, I understand how you feel. But let's not misplace our anger. Gregg Williams and Roman Harper do not deserve it.