Lack of Consistency with Helmet-to-Helmet Rules?

Share All sharing options for: Lack of Consistency with Helmet-to-Helmet Rules? 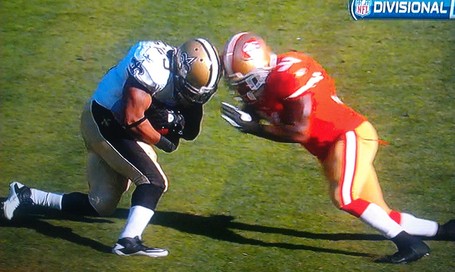 This was the moment, right here, when it all fell apart for the Saints yesterday. Donte Whitner's helmet-to-helmet hit on Pierre Thomas at the 2-yard line that saved an opening touchdown, knocked Pierre out cold and forced the first of five Saints turnovers on the day. It was only the first drive but it was all downhill from this point for the Saints when it could have gone in an entirely different direction.

And despite initial reactions by many fans, including myself, it was a completely legal hit because helmet-to-helmet contact is allowable on a ball carrier. So I'm not here to make excuses. I'm not saying this is the reason the Saints lost. I'm not claiming the 49ers are a dirty team. And I'm not complaining about poor officiating. My gripe is this: how is a hit legal in one instance yet illegal in another when the results, as we saw with Pierre Thomas, are just as damaging?

To watch Pierre Thomas' body go limp upon contact and fall lifelessly to the ground was frightening, to say the least. I first though he suffered a paralyzing neck injury. Yet the hit that caused it was within the rules. But had he been a quarterback or defenseless wide receiver taking the blow, it would have been a penalty and possibly subject to further discipline.

It's difficult for me to wrap my mind around the simple fact that such a dangerous collision, the type of collision the NFL knows is harmful and has already gone to great lengths to avoid by changing the rules, is allowable in certain situations and on certain players but not on all. Isn't the goal to protect everyone from head injury, not just some?

The truth of the matter is, I don't know what the solution would be or if there even is one. Let's face it, this kind of stuff is just the nature of the game. It's a contact sport and injuries come with the territory. You're not going to be able to protect every player in every situation. Even with this particular hit, Pierre put his head down before contact so he's got to share at least some of the responsibility.

To make the above hit illegal would just be the continued wussification of the NFL, so I'm not suggesting a rule change in that direction. Perhaps undoing the recent rule changes, eliminating the focus on helmet-to-helmet hits altogether and acknowledging that s*** happens in this sport would be the better solution.

I'm not sure. But the inconsistency just isn't sitting right with me this morning. As the son of two lawyers, I suppose it's my innate desire to see fairness and equality applied at all times within a governing rule system. Something just isn't right here. Or maybe I'm still just upset about the events that transpired yesterday and taking things too personally. Certainly possible. Just thinking out loud here.