Share All sharing options for: Saints 32 @ 49ers 36: Breaking Down the Breakdown

Yeah, that's right. We're going to relive the worst parts of the Saints defensive breakdown in the final three minutes of their Divisional playoff loss to the San Francisco 49ers this past Saturday, also known as The Vernon Davis Show. Deal with it.

I've broken down the two big Vernon Davis receptions that put the Niners in scoring position twice as well as the final game-winning touchdown now being called The Catch III.

Grab a strong drink (I don't care what time it is) and make the jump. Fair warning: what you're about to see may be disturbing for some readers. Reader discretion is advised.

The Saints have just taken the lead following a Sproles catch and run. Not much time remains in the game. The 49ers are in their own zone. It's four down territory but if the Saints can get a defensive stop and the ball back, victory would be a likely possibility. Instead, a deep pass to Vernon Davis puts the San Francisco in scoring range. 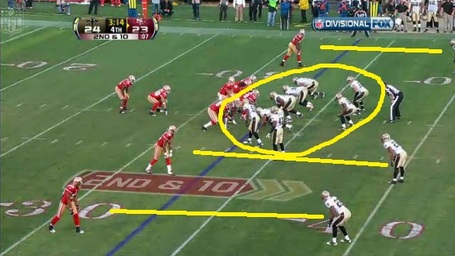 The Saints are in a base 4-3 with man-to-man coverage on the outside and no deep safety. Instead, Roman Harper is standing near the line of scrimmage. 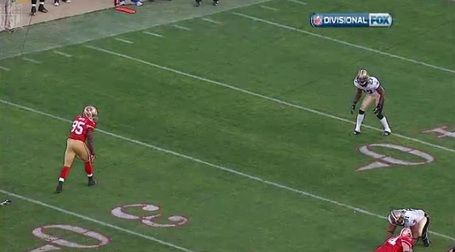 Everyone in the secondary is giving their receiver a big cushion. Malcolm Jenkins in pretty much playing cornerback, covering Vernon Davis one-on-one on the outside. 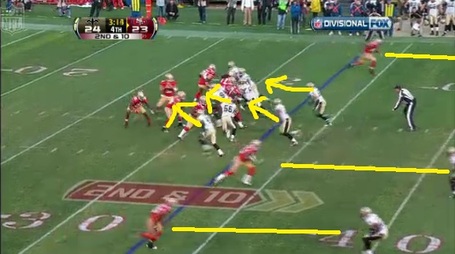 The defense brings the blitz. All three linebackers and Harper run right at Alex Smith. The three defensive backs drop back into coverage with their men. 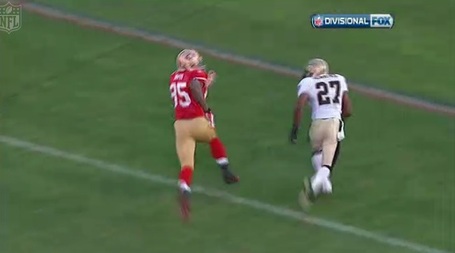 Davis gets separation and a good angle to the outside on Jenkins.

Jenkins isn't even looking at the ball when it arrives perfectly thrown right into Davis.

The Saints take back the lead again with a huge catch by Jimmy Graham and then a tough run after to get into the end zone. Once again, the Saints defense just needs to come up with a stop. It's the exact same down and distance from the exact same spot on the field for the 49ers. And they're going to get nearly the exact same unbelievable result from an Alex Smith to Vernon Davis hookup.

The 49ers have four receivers and the Saints are again in man-to-man coverage. They're playing it a little bit safer this time with Roman Harper playing deep safety. Vernon Davis is in the slot; Malcolm Jenkins is covering him one-on-one again, basically a cornerback.

Once again Vernon Davis is just too much for Jenkins. Davis gets separation and an inside track. Alex Smith throws a beautiful pass over the middle to lead Davis and hit him stride. 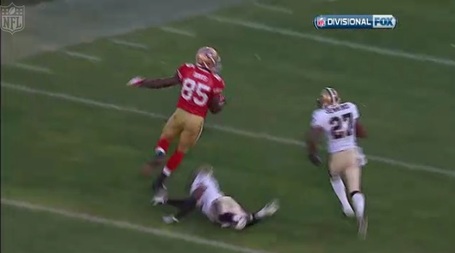 Now it's a foot race. That blurry figure on the ground is Roman Harper flying by on a useless whiffed tackle. Good thing he was back there for safety. Probably would have been better if he had just blitzed instead. Jenkins would eventually catch Davis, but it was too late.

After giving up the big 47-yard Vernon Davis catch and run, the Saints defense has held the 49ers to third down. It's the biggest play of the game. They only need four yards but the Niners are only thinking end zone. If they get it, they win. If they don't, the game probably goes into overtime after a game-tying field goal. Would you like to guess who San Francisco throws to on this play? We know how it ends. 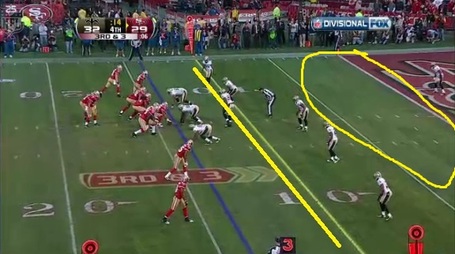 Now the Saints defense is playing really safe. Looks like some sort of zone coverage. Only three men on the line and everyone else playing back. There's a gap in the coverage, however, between the linebackers/cornerbacks in coverage and the deep men. 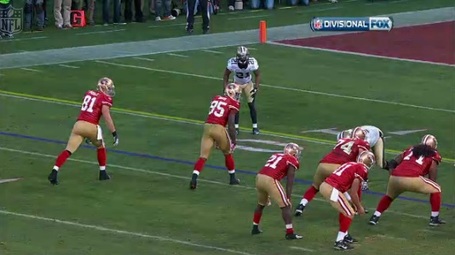 Nobody is covering Vernon Davis at the line. Hard to believe after what he'd just done to this defense in the last three minutes. Just Peelle is also on that side of the line. 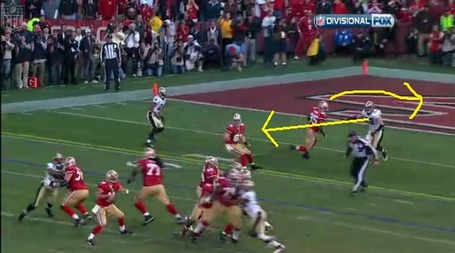 Davis is free and clear to run where he wants. He slips in right behind Scott Shanle and in front of the deep men. Shanle and Patrick Robinson both seem more concerned with Peelle underneath than the dangerous Davis. Again, hard to believe. I'm assuming Shanle was trusting Harper to take over on Davis coverage duties. 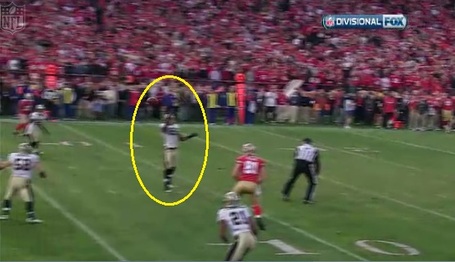 When the pass is thrown, Martez Wilson leaps and is a cat hair away from tipping the ball.

Harper reacts to the pass, he meets Davis at the goaline as the ball arrives. Vernon has body position and makes the catch while falling into the end zone over Harper.